As criticism of the Police Department’s so-called stop-and-friskpolicy grows louder, Mayor Michael R. Bloomberg took to the pulpit before a black congregation in Brooklyn on Sunday to make his most forceful and nuanced defense of the practice yet, arguing that it had helped make New York the safest big city in the country, while acknowledging that the police needed to treat those whom they stopped with greater respect. 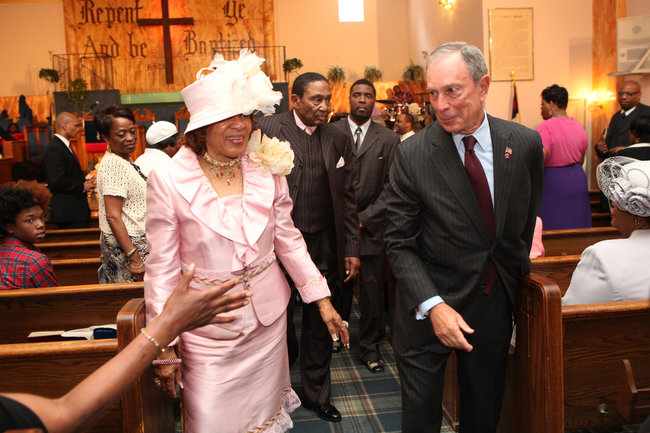 Mayor Michael R. Bloomberg on Sunday with Priscilla Lyons at First Baptist Church of Brownsville, where he gave his first full speech on stop-and-frisk.

“We are not going to walk away from a strategy that we know saves lives,” Mr. Bloomberg said. “At the same time, we owe it to New Yorkers to ensure that stops are properly conducted and carried out in a respectful way.”

Although the mayor has defended street stops frequently in recent months, usually in response to questions from reporters at news conferences, Sunday was the first time he gave a full speech on the topic.

Coming a week before a planned march to protest the policy, and just days after a group of minority lawmakers visited the Justice Department in Washington to call for an investigation of it, the speech was clearly an effort to address some of the criticism. The church where the mayor spoke, the First Baptist Full Gospel Church of Brownsville, is in a neighborhood where both the level of crime and the number of street stops are among the highest in the city.

In the city as a whole, the police stopped people and questioned them 684,330 times last year, a 600 percent increase from Mr. Bloomberg’s first year in office. Eighty-seven percent of those stopped were black or Latino, and the vast majority were young men, which has led some minority leaders to denounce the policy as a form of racial profiling.

Mr. Bloomberg said Sunday that racial profiling was banned by the Police Department, and that “we will not tolerate it.” He added, however, that the city would not “deny reality” in order to stop different groups according to their relative proportions in the population. (He used the examples of men versus women and young versus old people, rather than white versus black or Hispanic.)

“If we stopped people based on census numbers, we would stop many fewer criminals, recover many fewer weapons and allow many more violent crimes to take place,” Mr. Bloomberg said.

Some critics have pointed out that, as the number of stops increased, the percentage in which guns were found diminished. Last year, the police seized 780 guns, suggesting that guns were recovered in roughly one in 1,000 stops.

But Mr. Bloomberg said the policy was having an equally important effect by deterring people from carrying guns.

“By making it ‘too hot to carry,’ the N.Y.P.D. is preventing guns from being carried on our streets,” he said. “That is our real goal — preventing violence before it occurs, not responding to the victims after the fact.”

The difficulty of allaying concerns about the policy became clear as soon as the mayor finished speaking, when the pastor of the church, Bishop A. D. Lyons, told reporters that he thought it was wrong that so many of those stopped were black.

“We’re not the only ones carrying guns,” he said.

Asked if he thought the police engaged in racial profiling, he said yes, and added that a lot of police officers “don’t want to be in Brownsville and they have an attitude when they come in Brownsville, and you’ve got to deal with their attitude.”

Some of the congregants, too, expressed unease about the policy, although they seemed to appreciate Mr. Bloomberg’s attempt to address the criticism.

“He has an understanding of what we’re going through,” said Timothy Coleman, 55, though he objected to how the policy was used and said he himself had been stopped “just for being in the neighborhood.”

“The neighborhood has enough to fear,” he added.

Annie Williams, 85, said she thought young people were often stopped for little cause. “I don’t think it’s right if the children are just walking down the street,” she said.

In a sign of how seriously City Hall is taking the firestorm over stop-and-frisk, Mr. Bloomberg was accompanied to the church by several of his senior aides: the police commissioner, Raymond W. Kelly; the schools chancellor, Dennis M. Walcott; and two deputy mayors, Caswell F. Holloway and Howard Wolfson.

In a speech that was clearly intended to show particular sensitivity to its audience, Mr. Bloomberg opened with an allusion to the Rev. Dr. Martin Luther King Jr.’s “I Have a Dream” speech, to suggest that gun violence remained a barrier to full racial equality.

Later, he said of the frisk policy, “to borrow a phrase from President Clinton, I believe the practice needs to be mended, not ended” — a reference to a phrase that Mr. Clinton used in a very different context, in a 1995 speech defending affirmative action programs.

Third graders in in Gwinnett County, Ga., were given math homework Wednesday that asked questions about slavery and beatings.

Turn in your neighbor for owning a gun….get $1000 REWARD in Newark, NJ