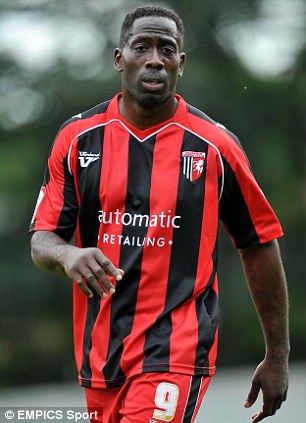 A black footballer was unfairly sacked by Gillingham after being racially victimised, an employment tribunal has ruled.

The 6ft 2in striker told a hearing in Ashford, Kent, that he and other black players at the club were treated differently from white players.

McCammon said he was ordered to come into the ground amid ‘treacherous’, snowy driving conditions while some white players were told they were not required.

He also said the club tried to ‘frustrate him out’ by refusing to pay private medical bills to help him regain his fitness following injury.

Instead, he claims he was offered the same operation on the NHS rather than privately, a move he described as ‘completely out of character’ for a Football League club, and that he was fined two weeks’ wages when he paid a visit to a private consultant.

In contrast, the former Charlton, Swindon, Millwall and Brighton player said, a white team-mate was flown to Dubai for treatment by an eminent physiotherapist at the club’s expense.

In a letter sent to the Professional Footballers’ Association (PFA) outlining his grievances, McCammon also claimed he was told not to blog while others were permitted to.

Officials at Gillingham said they were ‘staggered’ by the ruling, saying the club had employed thousands of staff of different races and religions.

The club said in a statement: ‘Today we have received the decision of the Ashford Employment Tribunal which sets out their findings that Mark McCammon was unfairly dismissed and that his dismissal was an act of racial victimisation.

‘We are hugely disappointed, in fact staggered, by this decision. As an organisation we are an equal opportunity employer and do not discriminate against, nor victimise our staff.

‘This case is the first of its kind to be brought against the club in its entire history, a history that has seen the club employ many thousands of staff of various race, religion and creed, none of whom have ever felt the need to bring such a claim. 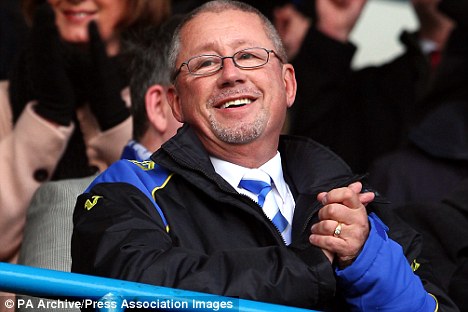 ‘Given the nature of the case, and the findings, we will discuss the judgment with our lawyers and decide upon the next course of action, whether that be an appeal against the findings, or another form of action, as deemed appropriate. There will be no further comment on the case by the club until the matter has run its full course.’

McCammon told the tribunal he had been put ‘through hell’ at Gillingham and had not been given an answer over why he was treated differently to other players.

Dubai-based Gillingham chairman Paul Scally described McCammon’s claims as being made ‘maliciously and without foundation’, adding that the club had not had to deal with an allegation of racism in 18 years.

McCammon said that during an injury spell, he had to stay behind at the club for four hours longer than the other injured and non-injured players.
He claimed this was on the ‘strict instructions’of Mr Scally.

‘Once the players had all left, I sat there watching mind-numbing daytime TV and Britain’s Got Talent,’ he said. ‘The process of waiting was designed to inflict maximum levels of frustration on me and it certainly had that impact. Sitting at the club instead of progressing with my operation was like watching paint dry.’

The events which led up to McCammon’s dismissal were triggered on November 30 2010, when south-east England bore the brunt of heavy snowfall. On that day, McCammon said he and two other black players – Josh Gowling and Curtis Weston – were told to make the four-mile drive from the house they shared to the club’s medical rooms.

‘One of my housemates had contacted another player who lived about two miles nearer to the club who was also due to attend the medical centre with us on that day,’ McCammon’s statement said. ‘He was a white player who had informed us that the club physiotherapist had told him that he was not required to come in on that day because of the snow.

‘There was a further player we contacted who was in the same boat, ie he needed to attend the club for physio on the same day. He lived further down in Kent in Maidstone and had a longer drive in. He was white and had been informed by the club staff that he also did not need to come in for the day because of the snowy conditions.’

Later, McCammon said one of them received a text message threatening to dock them two weeks’ wages unless they made it to the stadium by midday. When he arrived at the club, McCammon said he headed to manager Andy Hessenthaler’s room to confront him about being ‘racially intolerant’ over the decision to order them in. He claimed Hessenthaler reacted angrily.

‘He lost his temper and flayed the contents of his table. He pushed the table over, throwing overboard the computer on it and all its other contents. It was the most aggressive and temperamental physical display of tantrum I had ever seen.

‘The body poise in his language as he stood up to address me was a stance that stated: “How dare you talk to me?” I was concerned he was going to attack me and I asked whether he was planning to hit me.’

McCammon was subsequently ordered to attend a disciplinary hearing and later received a letter saying he was dismissed. The forward said that after leaving the club, Gillingham ‘were effectively campaigning covertly against me’ by trying to sabotage his career. Strong interest was shown following his departure by 11 clubs but talks with all collapsed, often at a late stage.

‘It soon became known that the chairman had been interfering,’ McCammon said in his statement. ‘My agent was told by other agents that the job he was doing was an impossible one as they were aware that GFC were effectively campaigning covertly against me with the intention of sabotaging my career.’

McCammon signed for Gillingham in 2008 on £2,500 a week and was the club’s highest paid player.

‘It was a phenomenal deal,’ he said. ‘It was a deal that most players would have taken.’

But he disputed claims that the ‘trade-off’for such a generous salary was that if Gillingham remained in League Two during contract terms, his salary would be cut by 15 per cent.

McCammon said: ‘There was absolutely no way I would have agreed to that. That wasn’t making sense to me.’

The tribunal has heard that a clerical error in McCammon’s contract meant the 15 per cent line was accidentally omitted despite being agreed verbally.

McCammon was ‘relieved’ at the judgment and said he hopes it will lead other players to raise ‘legitimate complaints’ of discrimination.

A statement issued through his solicitor, Sim Owolabi, said: ‘Mr McCammon is relieved that he has been afforded the opportunity to put forward the truth about the experience he suffered at the hands of his former employers.

‘He is pleased that the employment tribunal has found in his favour and feels that the judgment makes clear that his dismissal was not only unfair but an act of race victimisation.

‘Mr McCammon raised a legitimate complaint of race discrimination, which the tribunal found that Mr Scally had discounted from the start as being without merit.

‘Mr Scally did not bother to investigate the complaint and ultimately dismissed him because of it.

‘Mr McCammon is astounded that the club went to such lengths to both dismiss him and win their case before the tribunal.

‘Mr McCammon hopes that his success will make other players feel free to raise legitimate complaints of discrimination and not suffer the traumatic treatment that he has for doing so.

‘He wishes to thank all those who stood by him during the very difficult and prolonged trial period which tested the courage of his supporters.

‘Their support was invaluable and he now wishes to be able to put the matter behind him and carry on with his life.’