Harriet A. Washington discusses her book on democracy now.

Read the whole book below

The most notorious medical experiment in American history was surely the Tuskegee syphilis study, in which 400 black men with syphilis were left untreated for 40 years, from 1932 until 1972, so government doctors could study the course of the disease. The experiment ended only because a journalist exposed it, igniting a firestorm of public outrage over its racism and cruelty. By then, as many as 100 of the men had already died of syphilis.
Tuskegee was just part of a pattern of experimental abuse, one of many shameful chapters in what Harriet A. Washington calls “the long, unhappy history of medical research with black Americans.”
Ms. Washington, a journalist and research scholar in ethics, writes in “Medical Apartheid” that this history has left blacks with an ugly legacy of distrust for research and even treatment, and that it is a lingering stain on the history of medicine.

She does not oppose medical research or blacks’ inclusion in it. On the contrary, she calls research “utterly essential,” and blacks’ participation necessary. “African-Americans,” she writes, “desperately need the medical advantages and revelations that only ethical, essentially therapeutic research initiatives can give them.”
But first, she argues, the air must be cleared. She is certainly the one to do it. She has unearthed an enormous amount of shocking information and shaped it into a riveting, carefully documented book.
Blacks have been forced to undergo painful, risky experimental surgery, dosed with radiation and singled out for experiments aimed at finding brain abnormalities linked to violence. They have been falsely assumed to feel pain less than whites and to require higher X-ray doses for a readable film.
One of the worst offenders was James Marion Sims, a 19th-century surgeon who has been venerated as a selfless benefactor of women for devising ways to repair severe vaginal injuries that can occur in childbirth.
Sims honed his skills by performing scores of painful operations on the genitals of black slaves. His early attempts so often failed that he operated on one young woman 30 times. The women had to be held down during the excruciating operations. Though ether was available, Sims refused to use it, insisting it was not needed. But when he had refined the surgery enough to offer it to white women, he always gave them ether. 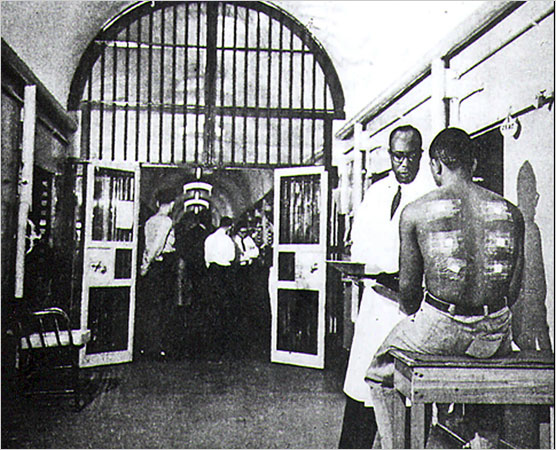 Several government agencies and private companies tested pharmaceuticals on inmates at Holmesburg prison in Philadelphia from 1951 to 1974.

To the question of whether it is fair to judge people like Sims by the ethical standards of a later era, Ms. Washington replies that he violated the ethical codes of his own day.
Reprehensible behavior continued into the 20th century. Often, the so-called research performed on blacks had the trappings of science but was meaningless, poorly designed and based on specious theories. People must have known better, but apparently chose not to think about it.
“In the South,” Ms. Washington writes, “rendering black women infertile without their knowledge during other surgery was so common that the procedure was called a ‘Mississippi appendectomy.’ ” But the same was true in the North, as recently as the 1970s, when unnecessary hysterectomies were often done on poor black and Puerto Rican women to give doctors in training a chance to practice their skills.
Some of Ms. Washington’s arguments are less convincing than others. She questions the “significance” of two black men’s being selected as the first subjects to test the AbioCor artificial heart in 2001 and 2002. But was it significant?
Since two of the first six subjects were black, she notes that they made up 33 percent of the test subjects, “almost three times their representation in the population,” and suggests that blacks were used disproportionately to test a device that, if ever approved, would probably be too expensive for most minorities. Ultimately, 14 people tested the AbioCor, but she never gives the complete racial breakdown. From her account, it’s hard to figure out what was going on.
In another venture onto thin ice, Ms. Washington calls for “more exhaustive studies” of an experimental AIDS vaccine that initially appeared to protect blacks and Asians, but not whites. But when the data were closely analyzed, the first finding did not hold up: the vaccine did not work for anybody. Even so, Ms. Washington implies that the vaccine did have promise for minorities but was abandoned purely because it did not help whites. If there is evidence to justify sinking more money into this vaccine, she does not provide it.
But this is an important book. The disgraceful history it details is a reminder that people in power have always been capable of exploiting those they regard as “other,” and of finding ways to rationalize the most atrocious abuse. The victims are declared defective, violent, hypersexed or a drain on the community. The medical tinkering is for their own good, and the greater good of society.
The worst abuses in this country may be a thing of the past, but history has a way of repeating itself. Ms. Washington warns that Africa and other poor regions are becoming the next venue for exploitative studies by foreign governments, universities and drug companies, which may use their citizens to develop medicines and other treatments that those nations will never be able to afford.

How Well You Sleep May Hinge on Race

Scientists say electricity could be used to regrow limbs