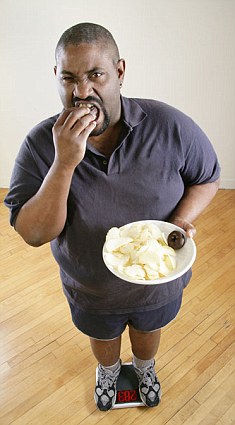 Men who meekly bow to diets ‘forced on them’ by their wives can actually GAIN weight, after eating ‘landslides’ of food away from home

Men who meekly bow to diets ‘forced on them’ by their wives can actually GAIN weight, after eating ‘landslides’ of food away from home.

Wives rarely consult with husbands before ‘putting’ them on a healthier diet.

Only couples who negotiate a new ‘healthy’ diet make progress.

Otherwise, after three or four nights of healthy, low-fat turkey, men tend to slink off to an all-you-can-eat buffet.

It’s just easier to ‘pretend’ to diet to maintain a happy home.

‘The key to married men adopting a healthier diet is for couples to discuss and negotiate the new, healthier menu changes as a team,’ said Derek Griffith, assistant professor at the University of Michigan School of Public Health.

‘I think at dinner a lot of men are eating healthier, but they compensate for the dissatisfaction of not eating what they want by making unhealthier choices outside the home,’ Griffith said.

Physicians can help by recognizing that wives play a central role in what men eat at home, Griffith said.

‘Doctors could suggest that men have a tactful conversation with their wives in a way that ensures the husbands aren’t sleeping on the couch that night,’ Griffith said.

The majority of men said their wives didn’t consult them when helping them to adopt a healthier diet.

Even though the healthier diet was often ordered by a physician, the husbands often disliked the food changes, but to avoid conflict, they didn’t object. 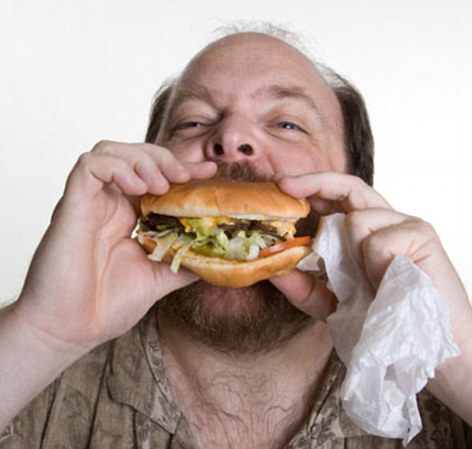 Mmm! Even though the healthier diet was often ordered by a doctor, the husbands often disliked the food changes, but to avoid conflict, they didn’t object

Men focused more on maintaining a happy home than having a say in what they ate.

In fact, the only examples found of couples negotiating healthy food choices came about to benefit the children in the home, Griffith said.

However, without that communication, those good intentions and healthy diet changes often backfired, the study found.

After tasteless ground turkey for the fifth night in a row, some men would head to the all-you-can-eat buffet for ‘a landslide of food.’