By SAMUEL G. FREEDMAN                 Published: April 13, 2013
Midway through the second half of a close and pivotal game against Texas Southern during the 1967 football season, Coach Eddie Robinson’s Grambling team mounted a drive. It ended abruptly when Grambling’s center threw a forearm at the nose tackle who had been dominating him. A referee penalized Grambling and ejected the center from the game.

When the center, Thomas Ross, reached the sideline, Robinson was waiting. Yet he did not strike Ross. He did not curse him. He did not even shout at him. Instead, in controlled, staccato bursts, he delivered a lesson about character and teamwork.

“You have satisfied yourself,” Robinson said. “You got him back. But we told you about stability and self-control. Now you think about us. We don’t have a center, and we got to play the rest of the game.” Robinson motioned to the other players, standing on the sideline or sitting on the bench. “Look at what you did. Look at the people you let down.”

This incident, captured in the 1968 documentary “Grambling College: 100 Yards to Glory,” sprang to my mind in the wake of Mike Rice’s recent firing as the Rutgers men’s basketball coach. What made Robinson’s example so relevant was not only that Rice had been dismissed for physically and vocally assaulting his players. There was also an unexamined premise in much of the news coverage of other coaches notorious for their treatment of players. 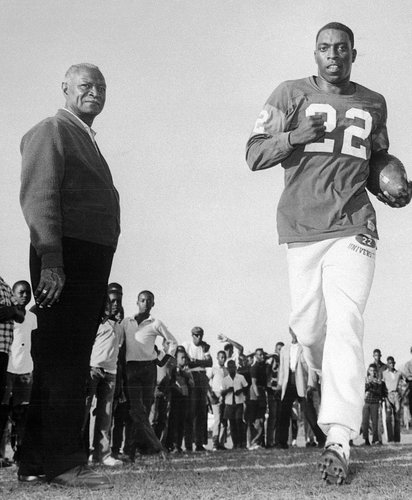 The list included some coaching luminaries: Bobby Knight, Woody Hayes, Mike Leach. The brutal preseason training regimen that Bear Bryant inflicted on his Texas A&M team became part of his legend, celebrated in the book and the film “The Junction Boys.” This litany of success left the impression that abusive coaching, however unsavory to the general public, was inextricably linked to winning. Even Rice, after all, had a 73-31 record, with two N.C.A.A. tournament appearances, in three seasons at Robert Morris before going to Rutgers.

Yet after spending more than six years researching the world of black college football during the civil rights era, I can immediately think of two vivid examples to the contrary: Robinson and Jake Gaither, his friend and rival, at Florida A&M. They exemplified the combination of on-field excellence and personal decency.

Robinson retired in 1997 with 408 wins for his career, the most of any major college coach. Gaither, who stopped coaching after the 1969 season, posted a winning percentage of .844. They collectively sent scores of players into the pros. They did so, moreover, without using profanity against a player, much less applying physical humiliation or bigoted insults.

“Damn it to hell” was the nastiest phrase in Robinson’s vocabulary. He often used humor, rather than ridicule, to inspire. Talking to an assistant about an oddly timid blocker, Robinson said: “Coach him to do some wrong. Let him miss a day from Sunday school. Give him a brick, let him break the window out. I’ll pay for it.”

Robinson ran practices that were notable for their attention to detail, repeating plays a dozen times, if necessary, until his team had every move right. He did not operate a gladiator school. After a single incident in which a starter was injured during a scrimmage, he largely stopped running full-contact drills.

In the coaching lexicon, Gaither steered even further from four-letter words than did Robinson. During the mid-1960s, for instance, Gaither’s quarterback Ken Riley skipped spring practice one day to check out the women on the A&M campus. The next day, Gaither called Riley to his office. Rather than raising his voice, he lowered it. As Riley later recalled, Gaither said: “Baby, you supposed to be the leader. You supposed to be my coach on the field.” He paused, letting those words penetrate. “If you’re lying to me, baby, who can I trust?”

Riley never defied Gaither again, and went on to become the quintessential A&M student-athlete, with the highest grade-point average on the team, followed by a stellar N.F.L. career as a defensive back for the Cincinnati Bengals and a master’s degree.

As fiercely competitive as Robinson and Gaither were, they never saw football dominance as their primary goal. Rather, they considered themselves in the business, in the mission, of creating dignified young men.

A minister’s son, Gaither had aspired to a career in law until his father’s early death derailed the plan. He remained a student of black history all his life, and often spoke of it to his players. So when he emphasized winning, he did so in part as a rejoinder to the indignities of slavery and segregation.

Robinson kept track of every player’s attendance in class and at church. He made a point of walking through the Grambling campus hand-in-hand with his wife, Doris, a high school English teacher, to model a successful home life.

“I never met a man like Coach Robinson,” said one of his greatest players, James Harris, who started at quarterback for the Los Angeles Rams and is now an executive with the Detroit Lions. “A man with so much compassion, a nice man when you meet him off the field, but such a competitor on the field.”