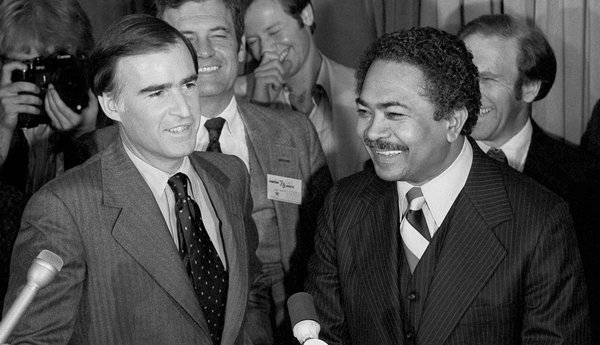 Mervyn M. Dymally, who broke barriers as a black lawmaker in California and in Congress after moving to the United States from his native Trinidad at age 19, died on Sunday in Los Angeles. He was 86.

He had been in hospice care, his daughter, Lynn V. Dymally, said.

Mr. Dymally became California’s first foreign-born black state assemblyman when he was elected in 1962, its first black state senator four years later and, in 1974, its first black lieutenant governor. In 1980 he became one of the first foreign-born blacks elected to the House of Representatives, where he served six terms representing Compton and other heavily black, low-income areas. He also led the Congressional Black Caucus for a time.

His success in winning office was rooted in his work organizing a new black Democratic base in areas around Los Angeles beginning in the 1950s and 1960s.

“This was a transformational period,” said Raphael J. Sonenshein, an expert in racial and ethnic politics in Los Angeles and the executive director of the Pat Brown Institute of Public Affairs at California State University, Los Angeles. “Between 1958 and 1962, the Democratic Party really came of age in the African-American community in California,” he said.

The area’s minority population had long been marginalized, but as the political climate changed, it created opportunities for new leaders like Mr. Dymally, Mr. Sonenshein said.

“If you came in from the outside and were able to put things together, it was fertile territory,” he said. “He was a very effective organizational leader.”

Mr. Dymally’s rise partly paralleled that of Tom Bradley, who became the first black mayor of Los Angeles. But Mr. Bradley built a coalition from a rising black economic class and liberal whites; Mr. Dymally, by contrast, galvanized poor and working-class residents and labor unions. He worked to improve health care for the poor and sponsored legislation to lower the state voting age to 18 and to expand civil rights protections for women. As lieutenant governor under Gov. Jerry Brown, Mr. Dymally joined Cesar Chavez in trying to protect farm workers from automation, which was taking away jobs.

Mr. Dymally was often trailed by accusations of corruption, including that he took bribes, but he never faced criminal charges. In 1978, he was defeated while seeking re-election as lieutenant governor after a television news report that he was going to be indicted. The indictment never happened, and two years later Mr. Dymally was elected to Congress after two other candidates had split the white vote in a Democratic primary.

In 2002, a decade after he retired from Congress, he was elected to fill the same Assembly seat he had won in 1962. He served three terms and lost a 2008 bid for State Senate.

Mervyn Malcolm Dymally was born May 12, 1926, in Bonasse Village in Cedros, Trinidad. His father was a Muslim of Indian descent. His mother was a Roman Catholic of mixed racial heritage. He eventually made it to Southern California, where he graduated from California State University, Los Angeles, and later earned master’s and doctoral degrees at other schools. He taught special education in Los Angeles schools before entering politics.

Besides his daughter, Lynn, he is survived by his wife of 44 years, the former Alice Gueno; his son, Mark; three sisters, Marjorie, Courtney and Hazel Dymally; two brothers, Bing and Malcolm; and three grandchildren. A marriage to Amentha Isaacs ended in divorce.

Lynn Dymally noted that even as her father embraced the struggles of American blacks, his own racial identity was complicated. She said that his marriage certificate to his first wife lists him as Indian, but that his race is described as “Negro” on her United States birth certificate.

Late in his life, as California became more diverse, he told his daughter, “You know, it’s strange, people are now referring to me as of Asian descent.”

Ms. Dymally added, “He always considered himself black or African-American even though there were distinctive qualities about him that would have made some people think he was Indian.”