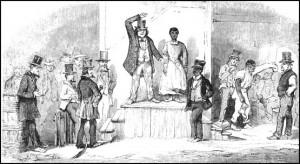 Say what you will about slavery, at least the ‘peculiar institution’ kept Black families intact.

Representative Bachmann’s grasp of American history has never been firm, particularly when it comes to slavery. She has stated that the founding fathers “worked tirelessly until slavery was no more in the United States,” despite the fact that several of our Nation’s founders owned slaves and fought to keep slavery alive in the new republic.

Not that the two positions are necessarily mutually exclusive. Slave owner Thomas Jefferson wanted to use the Declaration of Independence to outlaw slavery. That was a minority opinion among the founders, however, and Bachmann’s generalized assertion is a clear misreading of American history.

The pledge Bachmann signed this week is sponsored by The Family Leader, an Iowa-based group of Christian social conservatives. The “Marriage Vow – A Declaration of Dependence upon Marriage and Family,” attempts to buttress its argument that  “the Institution of Marriage in America is in great crisis” with statistics and scholarly citations. Here’s one such attempt:

If that sounds questionable to you, there’s a good reason. Leaving aside the implication that President Obama is somehow responsible for all problems within the Black community, the institution of slavery didn’t recognize the very concept of  “family” among captive Blacks. Marriage between slaves was, after all, illegal. And parents and children were routinely separated, forever, at the auction block.

The pledge provides a footnote to support their claim, citing a 2005 study, The Consequences of Marriage for African Americans. I decided to ask one of the study’s authors, Dr. Lorraine Blackman, what she thought of The Family Leader’s “pro-family” interpretation of slavery.

Blackman, an associate professor at Indiana University’s School of Social Work, pointed out that she wouldn’t have objected if, instead of 1860, the pledge Bachmann endorsed had selected a year sometime after slavery ended.

“As soon as they could,” Blackman said, “former slaves rushed to get married.” This led to a relatively high — and quickly growing — rate of marriage among African Americans.

According to the study Blackman co-wrote, by 1880, 56.3 percent of  Black households were what we now call “nuclear families.” (For Whites, that figure was 66.9 percent.) By 1950, nearly 80 percent of Black families were headed by married couples. By 1996, that figure had dropped to just 34 percent.

This is a serious problem, argues Blackman, but it won’t be solved by rewriting history to make slavery appear to have any redeeming qualities.