It’s no secret that Michigan’s been in a bit of an economic rough patch. For black Michiganders, the downturn has hit even harder.
According to recent research by the Economic Policy Institute, nearly one in five African-Americans in Michigan are unemployed.
That’s almost 2.5 times higher than the unemployment rate for white workers in the state. 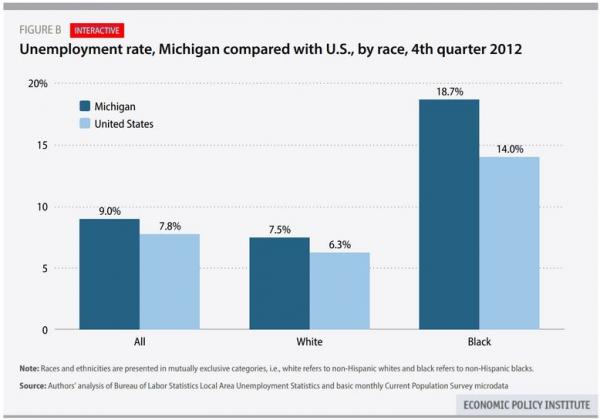 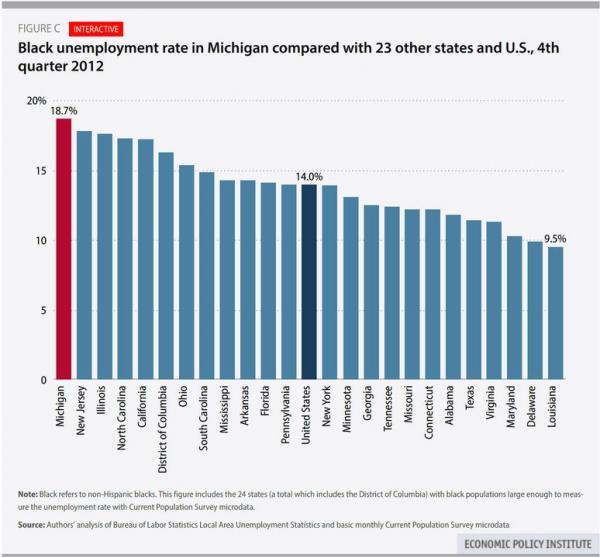 In light of the report, some are wondering why such numbers persist in the Great Lakes State.
MLive’s Melissa Anders covered a slew of reasons for the unemployment racial gap nationally, from bias in hiring to a lack of access to networking and educational opportunities.
But we wondered: what makes these numbers so high in Michigan specifically?
Is it a lack of job access in Detroit?
Detroit’s had a hard time bringing new jobs to the city, but even those employed in Detroit can find it hard to get to work in the first place.
In 2010, the Motor City was ranked the largest city with the highest African-American population — with 82.7 percent of the city’s residents identifying as black.
Detroit’s problem with public transportation is no secret, with some Detroit residents waiting three hours for buses in the face of route cuts.
At an online city hall meeting in April 2012, one Michigander asked Governor Rick Snyder:

“What can be done about the horrible transportation situation in the City of Detroit? I have had relatives lose their jobs because they cannot get to them.”

Or could it simply be a function of Michigan’s higher unemployment rate in general?
Michigan has been among several states with higher unemployment rates than the national average. Since African-Americans typically experience higher rates of unemployment, could the high number in Michigan be explained by the lack of jobs in the state in general?
It’s difficult to pinpoint which factors contribute the most to Michigan’s high black unemployment ranking. We’ll ask some experts in the coming days, but we want to get your thoughts.
What do you think contributes to the disparity in unemployment in Michigan?
– Melanie Kruvelis, Michigan Radio Newsroom

A Send-Off for a Legendary Harlem Funeral Director