TIÉBÉLÉ, Burkina Faso — On the rocky ground outside the Kollo mining village near the border between Burkina Faso and Ghana, about 100 people are working, 30 or so of them children. They smash boulders into pebbles and pebbles into grit with primitive hammers and sticks. They haul buckets of well water up the hillside and, pouring this water into shallow pans filled with rock and dirt, they swirl the muddy mix, looking in the silt for tiny flecks of gold.
Nearby, a small hill rises from this barren gold field, and atop this hill are hand-dug shafts that plunge 150 feet into the ground. Joseph, 15, and Germain, 12, lead the way down into the mine, gripping knotted ropes, finding footholds and squeezing past support timbers in the yard-wide pits. They get to the bottom after 20 minutes and silently begin to fill buckets of ore to be hauled up by rope.
The shaft ends in a cramped, pitch-dark pit. The bottom widens a bit to reveal a tiny, wedge-shaped crevice. In the darkness, sitting cross-legged with a flashlight strapped to his head, is a small boy. He chinks at the rock walls with a handmade pickax and scoops the shards into a large green bucket. His hands never stop moving – scooping and chipping, chipping and scooping. The older boys call him Théophile. They say he is 7 years old.
The United Nations’ International Labor Organization estimates that as many as a million children between ages 5 and 17 work in the small-scale gold mines of Africa for as little as $2 a day. In the African Sahel, a semiarid region that stretches from the Atlantic Ocean to the Red Sea across parts of Mali, Ghana, Burkina Faso, and Niger, 30 percent to 50 percent of small-scale mine workers are children, according to ILO estimates. Child labor is against the law in Burkina Faso, where last year the government announced a plan to significantly reduce the numbers of exploited children by 2015. But enforcement is lacking. 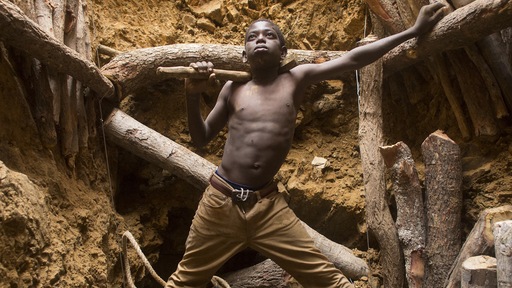 Nine-year-old Karim Sawadogo works with his uncle at a gold mine. Photo by Larry Price.

The U.S. Department of Labor also is funding a four-year, $5 million project in Burkina Faso, one of the world’s poorest nations, to reduce child labor in cotton farming and gold mining. The grant will be used to help raise awareness about child labor laws and build government capacity to monitor and enforce the laws, said Eric Biel, acting associate deputy undersecretary for the Bureau of International Labor Affairs. 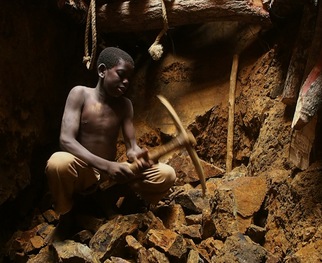 Meet one child miner who works 12-hour days in the gold mines of Burkina Faso.

The project aims to help 1,000 households and 10,000 children avoid “exploitative child labor” by offering schooling, financing, and alternative employment.
Child labor in the gold mines here is so prevalent — and so obvious — that the U.S. government prohibits its agencies and contractors from buying the gold directly from Burkina Faso. The prohibition, however, does not extend to private dealers.
Observers say porous borders, which facilitate black-market trades, and the very nature of the world gold supply chain make tracking gold mined in Burkina Faso almost impossible. Furthermore, federal purchases of gold from legitimate international sellers do not necessarily preclude some of the gold originating here.
The Canada-based Artisanal Gold Council, which is working to implement tracking systems and promote fair-trade policies, says there are no hard data to pinpoint whether gold mined by children in Burkina Faso reaches the United States or ends up in jewelry purchased by Americans. Anthony Persaud, a policy and field operations coordinator for the council, says it is “unlikely” but not out of the question.
Burkina Faso does not refine its gold but sells it through exporters to refiners in Dubai and Europe, he says. From there the gold enters the world supply chain.
“The thing about gold, you can fit $50,000 of it in your pocket without anybody noticing,” says Persaud. “It’s quite easy to move across borders like that.” 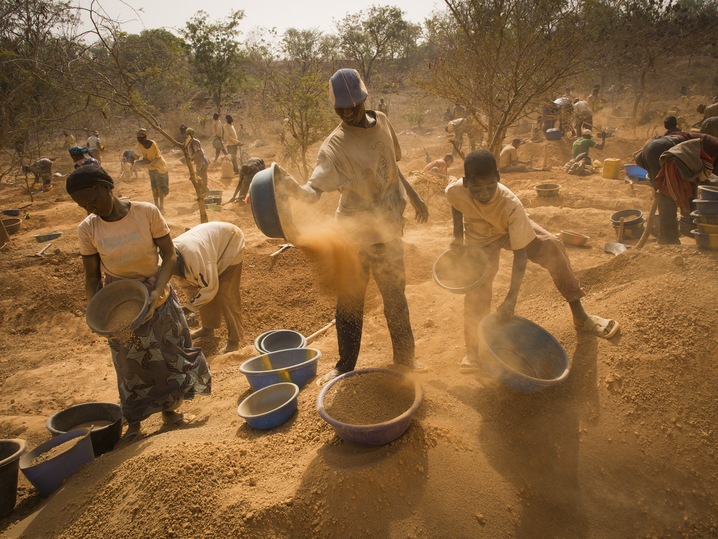 BURKINA FASO——-According to the CIA World Factbook, Burkina Faso is a poor, landlocked country in Western Africa that relies heavily on cotton and gold exports for revenue.

Juliane Kippenberg, a senior researcher for Human Rights Watch, said the group’s 2011 report on child labor at small-scale mines persuaded one gold refiner to suspend purchases from Mali.
“We are not calling upon companies to boycott gold that has been mined by children,” Kippenberg said, “but to remediate the situation if they find child labor in their supply chain — by engaging the relevant government, their suppliers, and demanding progress to get these children out of the mines and into school.”
Gold production in Burkina Faso has more than doubled in recent years, reaching 43.2 metric tons in 2012, according to the World Bank. (Unlike its neighbors Mali and Ghana, ancient gold kingdoms and major producers today, Burkina Faso is a relative newcomer to the market.) The return of international mining companies, banned for a time in the 1990s, has boosted production. Still, much of the gold comes from small-scale mines.
Small-scale gold mining began here in earnest in the 1980s as droughts and famines forced families from farms and into mines to earn a living. It remains a family affair.
“You cannot eliminate child labor in a community when the income of the family is so low,” said Alexandre Soho, senior program officer for the International Program for the Elimination of Child Labor of the ILO. “You need to tackle the issue of the livelihoods for the parents.”
The U.S. Labor Department and the ILO consider mining one of the worst forms of child labor because of the risks of injury and death and the long-term health consequences from constant exposure to dust, toxic chemicals, and heavy manual labor. The list of documented ills includes permanent lung damage caused by inhaling pulverized minerals, muscular and skeletal injuries, hearing loss, accidental blinding, and mercury poisoning with its attendant neurological damage. And then there is the fact that when children are working, they are not in school. 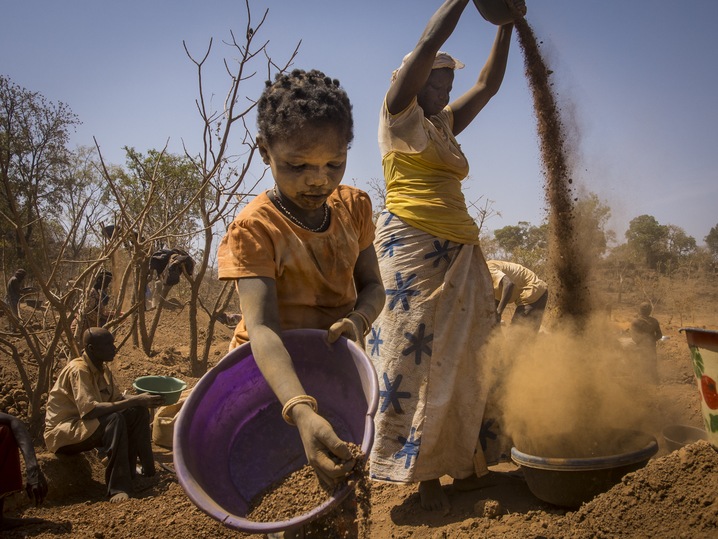 WORKING WITH ADULTS—-A child works alongside her mother at a mining site in Burkina Faso, where photographer Larry C. Price visited to document the child labor. After the ground is cleared of trees and grass, digging begins at a frantic pace for bits of gold.

In Tiébélé, near the Kollo mine, Daouda Ganno, general secretary of the mayor’s office, says local communities are trying to establish a prefect near each village to enforce school attendance. When a child is absent, he said, “the prefect will go out and find the parent and ask, ‘Where is your child?’ and then they will find the child and bring him to school.” This is Ganno’s plan, but for now, he says, it is still only a plan.
The nature of the mining makes enforcement difficult. Often the mines are illegal and hastily dug on private property. A claim is worked and then abandoned and the miners move on. The government collects taxes from miners who work or prospect on public land and has made efforts to regulate the small mines, but with an estimated 200 mining sites, most of them very remote, the task is overwhelming, authorities say.
At a new mining site in the Bilbalé region 12 miles west of Diébougou, about 200 people show up overnight, drawn by the rumor of gold. About 50 children are in the crowd and even the tiniest will work. In hours, the men and older boys have cleared the ground of scrub trees and sparse grass and the digging begins at a frantic pace.
Little children, some naked, squat on the ground to claw dirt and rocks into shallow bowls. The families fill as many vessels with raw dirt and rock as possible. This rock and dirt is weighed and becomes their share of the “take” from the mine. If gold is found, all the miners will get a little money. If there is no gold at this site, the miners move to the next place where gold is rumored to be. 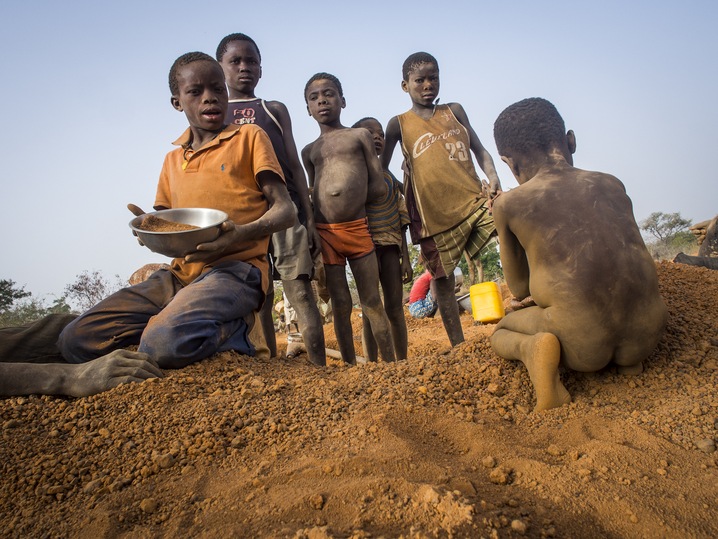 NEW MINING SITE—-At a new mining site, about 200 people show up. Of about 50 children in the crowd, even the youngest ones will work.

Miners earn little for their work — children even less. ILO surveys found children often were paid no more than $2 a day or only received food for filling buckets with gravel, Soho said. An entire family might make $5 at an undeveloped site. At established mines, such as Kollo, workers say they can earn about $40 a day.
If the yield at a field is good, word gets out and a boomtown springs up with shanties, supply huts, and cafes among the plastic-covered huts where miners live. Such is the case at Kollo, now home to 3,000 people.
With the established mines and villages also come the ore-processing centers where miners take large sacks or rocks and pebbles to be ground into powder. This powder will be processed, usually with mercury, and further refined into gold nuggets at another location.
The ore-crushing machines are makeshift contraptions cobbled together with pulleys, belts, grinding plates, and smoke-belching diesel engines. And while it takes the strength of a man to empty the bags of rock into the crushers, children do most of the other work. They sharpen metal grinding wheels without eye protection; scoop and bag fine powder without dust masks; and fetch and carry just inches from pulleys, belts, and spinning motors with the power to rip and shred anything caught in their works. 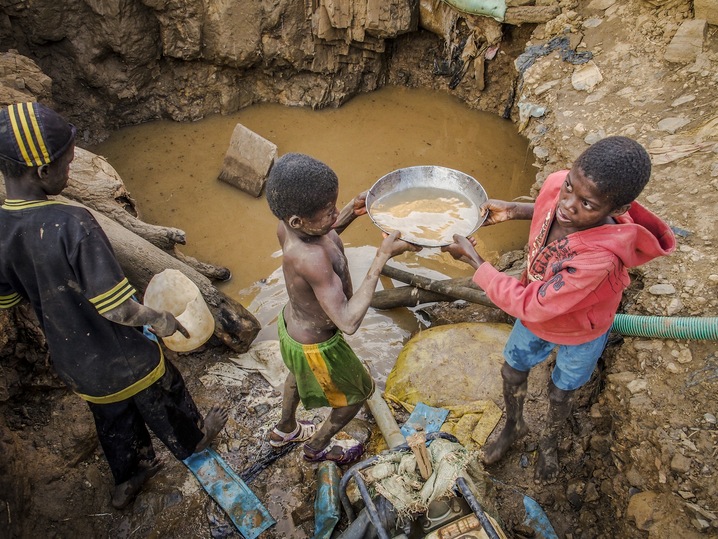 PANNING FOR GOLD—-Children bring water from the bottom of a 25-foot well to use to pan for gold.

The pounding and clanking of the crushers are deafening. The machines spew constant clouds of dust, which coats the children from their heads to their bare feet. Water is scarce, so the children use the bilge water from the machines to wash their faces and brush their teeth. When the children are not working, they lie down near the machines and sleep, oblivious to the noise. Their coughing is constant.
At the Kouékowéra camp near Gaoua, Karim Sawadogo works with his uncle. The boy says he thinks he is nine years old, but he isn’t sure. He has been to school, but only a little. Before the gold field, he was a goatherd near his home in northern Burkina Faso. In the camp, he cooks, fetches water. In the mine, Karim works barefoot and shirtless, his feet thickly callused, his muscles flexing as he chips ore and fills buckets.
Speaking in his native dialect, Karim smiles when he is asked what he wants to do with his life. “I came here to make money,” he says. “My dream is to make enough money so I don’t have to do this anymore.”
Editor’s Note: An earlier version of this story reported Burkina Faso had produced 32 metric tons of gold in 2012, according to the World Bank. Since publishing in April 2013, the World Bank has updated that number to 43.2 metric tons. 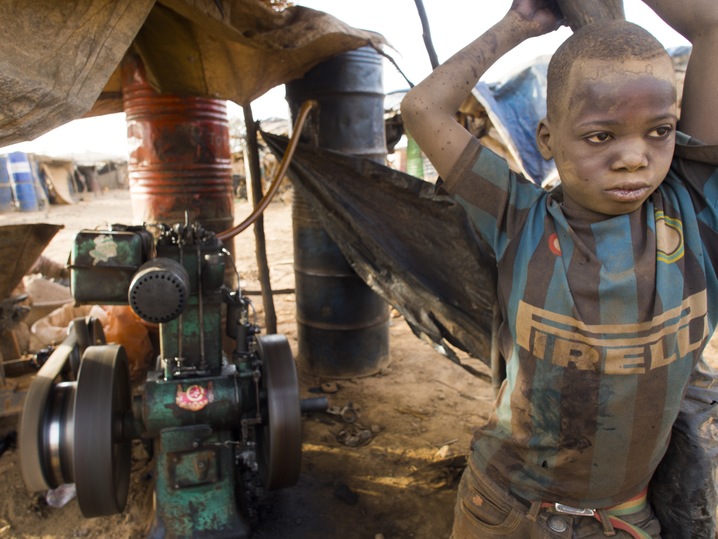 CRUSHING ROCK—-Ore-crushing machines spew clouds of dust, which coat the children from head to toe.