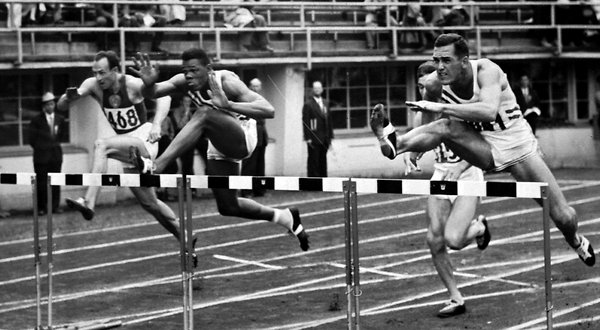 Campbell, center, competing in a heat of the 110-meter hurdles in the decathlon at the Helsinki Olympics in 1952. Still in high school, he finished second to Bob Mathias in that decathlon.

Milt Campbell, an outstanding all-around athlete who was the first African-American to become an Olympic decathlon champion, died on Friday at his home in Gainesville, Ga. He was 78. 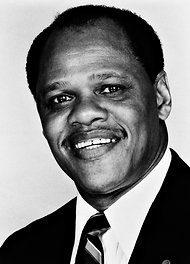 Milt Campbell was the first African-American to win the Olympic decathlon, in 1956.

The cause was prostate cancer, said his companion, Linda Rusch.

Campbell, who won the decathlon at the 1956 Summer Olympics and had also played football professionally, sometimes expressed frustration that he was less well known than the four other Americans who became Olympic decathlon champions from 1948 to 1976: Bob Mathias (twice), Rafer Johnson, Bill Toomey and Bruce Jenner.

Each of those four was acclaimed the world’s greatest athlete and received endorsement contracts and acting roles. Mathias became a five-term congressman, Johnson a confidant of the Kennedy family. Campbell, in contrast, remained relatively unknown.

“I’ve probably been the greatest athlete this country has ever seen,” he said, immodestly but perhaps not inaccurately, in a 1980 interview with The New York Times. And yet, he added, he had not been invited to appear at a recent televised tennis tournament that featured Toomey, Johnson and others billed as “America’s greatest athletes.”

“I guess I sound angry about it,” he said. “I think I have a right to be. I’ve paid my dues, but the advertising and commercial worlds don’t call me.”

There are various explanations for Campbell’s relative lack of glory after his victory at the 1956 Melbourne Games. One is that the Olympics were not televised as extensively as they would later be. Another is that he spent a large part of his career playing football in Canada. Yet another is that he alienated some people with his outspokenness about racial discrimination.

Campbell, who stood 6 feet 3 inches and weighed about 220 pounds, spent 1957 in the National Football League with the Cleveland Browns. He was a backup to his fellow rookie running back Jim Brown, who would go on to become one of professional football’s most celebrated players.

Just before the opening game in 1958, he later recalled, he was called in to the office of Paul Brown, the team’s coach, who wanted to know why Campbell had just married a white woman. Campbell said he told Brown that was not the coach’s business.

The Browns cut Campbell the next day. He went to Canada, where he played pro football with the Hamilton Tiger-Cats, the Montreal Alouettes and the Toronto Argonauts until 1964.

Before that, at Plainfield High School in New Jersey, Campbell was world class in track and a champion swimmer.  At Indiana University, where his career was interrupted by Navy service, he starred in track and football. He also excelled in tennis, bowling, judo, karate and wrestling.

The Olympic filmmaker Bud Greenspan once said, “Campbell was, to me, the greatest athlete who ever lived.”

Campbell’s first decathlon came in 1952 in the United States Olympic trials. He finished fifth in the hurdles but made the team in the decathlon. (Later in his career, Campbell returned to the hurdles, setting world records in the indoor 60-yard high hurdles and the outdoor 120 high hurdles in 1957.) His second decathlon came weeks later: while still in high school, he finished second to Mathias in the Helsinki Olympics.

In 1956, two days before Campbell’s Melbourne competition began, he was visited by Johnson, his teammate and the Olympic favorite. As Campbell recalled for The Star-Ledger of Newark in 2011:

“Rafer sat on the bed and said, ‘So how do you think this is going to turn out?’ And I just said: ‘This is a bad year for you to show up. Because this could be your two best days, but I’m still going to walk away with it.’ And Rafer looked at me like I had hit him with a bat.”

Campbell’s prediction was correct. He won that gold medal and set an Olympic record of 7,937 points for the 10 events. Johnson won the silver medal that year; without Campbell as competition, he won the gold in 1960.

Milton Gray Campbell was born on Dec. 9, 1933, in Plainfield. When race riots broke out in Newark in 1967, he returned from Canada, where he had been living and working, to help quell the tension in New Jersey. In 1968, he co-founded a community center and an alternative school there.

He later became a motivational speaker, with failure in business as his own motivation. “When I lost all my money in the meat-trucking business in 1976,” he told The Times in 1980, “I realized that I understood about success and failure. I realized that it had nothing to do with anyone else, only me.”

Campbell’s marriage of 25 years ended in divorce. In addition to Ms. Rusch, he is survived by a daughter, Julie Campbell; two sons, Justin and Milton III; a granddaughter; a great-grandson; and a sister, Sandra Smith. His son Milton Jr. died in 1987.

In his 2011 Star-Ledger interview, Campbell recalled a conversation he had with his high school track coach when he was 14. “He asked me what I wanted to be. I told him, ‘The best athlete in Plainfield.’ Then it became ‘the best in New Jersey,’ and ‘the best in America,’ and ‘the best in the world.’ ” He became, he said, “determined to be the greatest.”

'Grow' your own STEAKS! Lab breakthrough could see cuts of meat created using 3D printing technology – and they taste just like the real thing