A search for a missing 17-month-old girl ended tragically Saturday morning after her body was recovered beneath a toppled pile of laundry inside her grandmother’s closet.

The family of little Zyia Turner are calling her death an accident after cadaver dogs unearthed her body hours after an Amber Alert was issued throughout their Detroit community on Friday afternoon.

‘We were hoping, just hoping someone had took her,’ Ziya’s grandmother Bridget Elam told WXYZ behind tears. 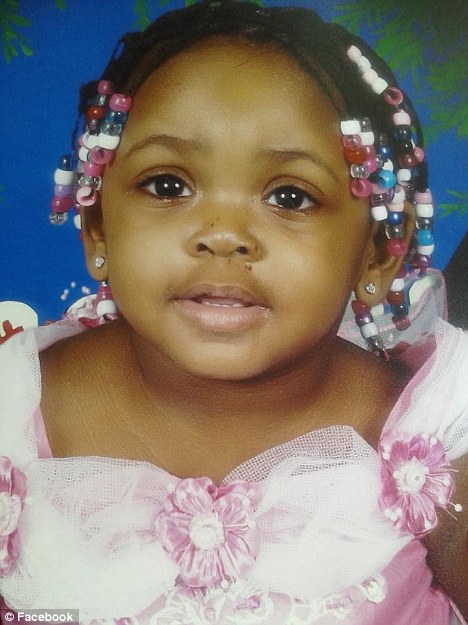 Found: The body of 17-month-old Zyia Turner has been found in her grandmother’s home closet tragically ending a hunt by police and family

‘We never thought she was in the house right up under our nose. It didn’t cross our minds.’

It was in a dishevelled bedroom of Ms Elam’s home, seen on camera packed with thrown clothes and other variously sprawled items, that her granddaughter was found by police.

Her uncle watching her at the time, as well as several other children, told police he suspected she had wandered away.

Ms Elam says it was 3.46pm when she got the phone call from her son, whose name has not been released, asking if she knew where Zyia was. 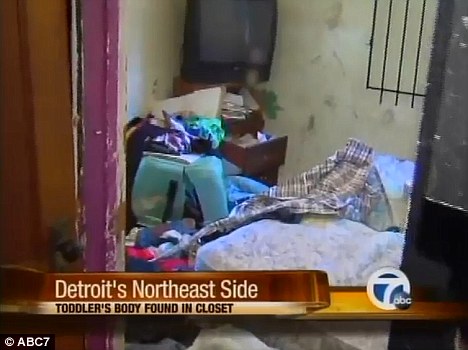 Buried: It was in this disheveled bedroom that police cadaver dogs found her body early Saturday morning under a toppled pile of clothing and other belongings 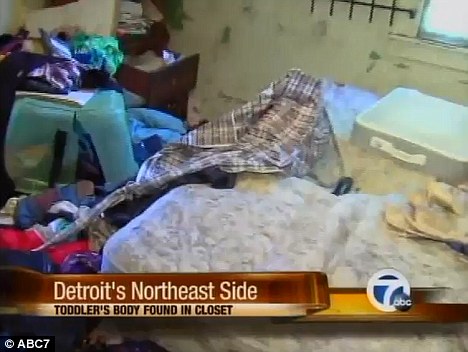 Overlooked: The girl’s uncle who was watching her at the time told police he believed she had wandered outside the home while she remained hidden

‘What do you mean you can’t find her?’ Ms Elam recalled asking to theDetroit Free Press.

The uncle told police he temporarily left the children alone to go to his bedroom before returning to find Zyia missing.

He reported the other children saying they hadn’t seen where she could have gone.

‘The last I saw her, she was sitting on the dining room floor eating cereal. That’s when everything went to a panic,’ Ms Elam recalled.

The girl’s father, 25-year-old Emmanuel Turner, said he rushed straight to the house to help their search efforts. 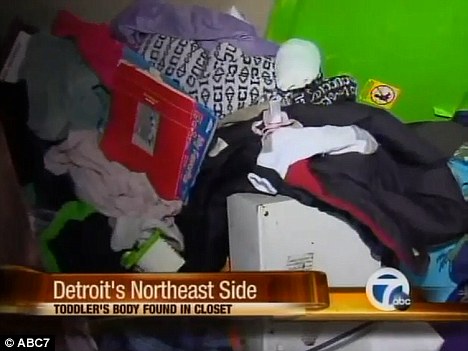 Toppled: A look inside that bedroom’s closet seen here revealed a wide array of clothing and other items the family believes fell on her

Worried the girl had left the property, the family made and distributed fliers throughout their neighbourhood after calling police and issuing an Amber Alert.

Receiving the tragic news early Saturday morning, for Ms Elam, the hardest part she says is now knowing that the toddler was in her house the entire time.

‘My grandkids… they’re blaming themselves, like we didn’t search the area,’ she told WXYZ. ‘But you can’t put that on you. It was a bad accident. It was a very bad accident that we just have to deal with.’ 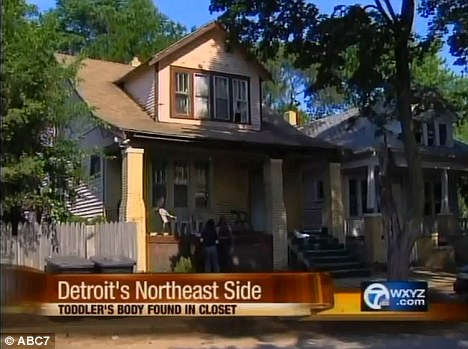 Arrest: Since her grim discovery at this home the girl’s uncle has been arrested while an investigation continues

While police said the family had been fully cooperating in the investigation the girl’s uncle has been placed under arrest.

The child’s cause of death has not been released while an autopsy has been completed while pending a toxicology screening.

The case remains under investigation and Detroit police homicide investigators are still questioning those involved.

The youngest of three, Zyia had a two and six-year-old brother.

"General Butt Naked" and the Cannibal Warlords of Liberia (Documentary)

The Battle Over Integration In Wake County's Schools