By Ben Waldron
Feb 18, 2013 8:08pm
Two medical school colleagues, one an immigrant from India, the other a life-long Mississippian, joined forces to resolve a historical oversight that until this month had never officially been corrected.
The oversight was no small one either. Until February 7, 2013, the state of Mississippi had never submitted the required documentation to ratify the Thirteenth Amendment, meaning it never officially had abolished slavery.
The amendment was adopted in December 1865 after the necessary three-fourths of the then 36 states voted in favor of ratification. Mississippi, however, was a holdout; at the time state lawmakers were upset that they had not been compensated for the value of freed slaves.
Dr. Ranjan Batra, professor of Neurobiology and Anatomical sciences at the University of Mississippi Medical Center, told ABC News he was inspired to investigate the history of the Thirteenth Amendment in his state after a viewing of the film “Lincoln.” 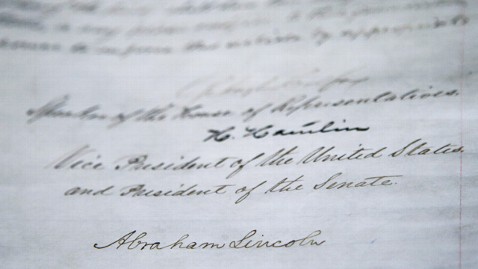 “At the end of the story there was an open question about how the ratification process proceeded,” he said. “Living in the South as I do, I found that a pretty big open question.”
So Batra proceeded to do some investigating of his own, noticing on the website usconstitution.net, that there was an asterisk next to the state of Mississippi in connection with the ratification of the Thirteenth Amendment.
“Mississippi ratified the amendment in 1995, but because the state never officially notified the US Archivist, the ratification is not official,” reads the statement on the website. Batra felt compelled to act to rectify the clerical oversight.
“Mississippi gets a lot of bad press about this type of stuff and I just felt that it is something that should be fixed, and I saw every reason that could be done,” he said. “Everyone here would like to put this part of Mississippi’s past behind us and move on into the 21st century rather than the 19th.”
So Batra enlisted the help of University of Mississippi Medical Center colleague Ken Sullivan, who took an immediate interest in the story, calling the national archives to confirm that they had in fact never received the proper paperwork. Sullivan then took a trip to the state archives to acquire a copy of the bill.
“The last paragraph [of the bill] directs the Secretary of State of Mississippi to inform the national archives of the law of the ratification which is exactly the way ratification is supposed to proceed, but that hadn’t been done for whatever reason,” said Batra.
Sullivan took his family to see “Lincoln,” and told ABC News the film inspired him further to correct this historical oversight. “I had that information when I went to see ‘Lincoln’ that weekend, I knew really what I was fixing to be a part of and it was overwhelming,” he said. “It was humbling to know that such a big part of the nation’s history and a huge part of my state’s history was involved in this, people stood up and applauded at the end of the movie, the first time I have ever seen that for any movie,” said Sullivan.
Sullivan then contacted the office of the Secretary of State Delbert Hosemann, who quickly agreed to file the required documentation to the National Archives and make the ratification official. On February 7, Director of the Federal Register Charles A. Barth wrote that he had received the notification, “With this action, the State of Mississippi has ratified the Thirteenth Amendment to the Constitution of the United States,” he wrote.
“For me it was just important that this part of history was done from our state,” said Sullivan. “I know we have some dark spots in our history through the south, it still affects people’s opinions about Mississippi today.”
Sullivan also remarked on the unlikely pairing of an immigrant from India and a life-long southerner working together to resolve the oversight.
“You have Dr. Batra, who is the immigrant and me who is the native-born, life-long resident of Mississippi, it was a unique pair,” he said.
Sullivan and Batra are thankful the ratification question has finally been resolved; now that asterisk next to Mississippi can finally be removed.

Atlanta Community outraged over French artist's 'satanic' mural of 'snakes', paints over it