By COREY KILGANNON
Published: April 5, 2013
One by one they squeezed into a meeting room at a Harlem needle exchange on Thursday — roughly two dozen men and women with drug problems — and Dimitri Mugianis, 50, greeted them all.

This was not your average 12-step program meeting. A small altar was set up on top of a plastic box and the tall candles on it were lit and the lights were turned off.

Faces were painted and bodies were purified with smoke from a cup of burning sage. Drummers banged out furious rhythms, and a man twanged away on an African mouth harp. Some drug users sang and chanted and danced vigorously, and others nodded out in seats.

At this needle exchange, run by the New York Harm Reduction Educators, Mr. Mugianis helps treat drug users with fire-dancing and other techniques he learned by traveling several times to Gabon in West Africa to visit a group that practices Bwiti, a folk religion whose essential practice is consuming a hallucinogenic plant called iboga. 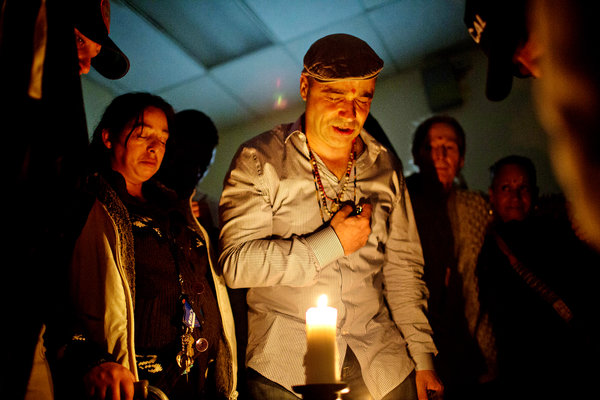 Julie Glassberg for The New York Times—-Dimitri Mugianis closing a session for drug addicts using elements of a shamanic ceremony.

After taking large amounts of iboga during all-night shamanic ceremonies of dance and music, said Mr. Mugianis, a former addict himself, he was initiated as a follower, and now he uses the techniques in New York to treat drug addicts.

“My job in the Bwiti is to dance with heroin addicts,” he said with a laugh after Thursday’s meeting, during which he held a furry civet skin and waved a ceremonial rattle from Gabon. He danced and sermonized about being reborn in the Easter season, using an impassioned style that combined beatnik phrasing, a preacher’s cadence and a savvy street hustler’s strut.

Years ago, Mr. Mugianis said, he kicked his own drug addiction by using ibogaine, a derivative of the iboga root.

Its advocates call ibogaine a cure for heroin addiction, but it is banned in the United States. Mr. Mugianis began acquiring it through an underground network to treat other drug addicts. He has stopped including ibogaine in his treatments since being arrested in a sting operation conducted by federal agents in Seattle in 2011, he said.

That arrest on possession charges came while he was trying to treat an addict, who turned out to be a police informer. After pleading guilty to a reduced misdemeanor charge, Mr. Mugianis was sentenced on March 25 and is now serving 45 days’ house arrest in his East Harlem apartment; he is allowed to work in the daytime.

Mr. Mugianis, who was profiled in a 2009 documentary film about the use of ibogaine,“I’m Dangerous With Love,” grew up in Detroit and moved to the Lower East Side in 1981. An anarchist and the lead singer for the Leisure Class, an experimental rock band, he would regularly shoot up with the likes of the beat poets Gregory Corso and Herbert Huncke and other mainlining cool cats, he said.

Mr. Mugianis, two decades into his addiction, was using $200 of heroin a day, along with methadone and cocaine. In 2003, he said, he kicked the habit in Amsterdam by taking ibogaine. 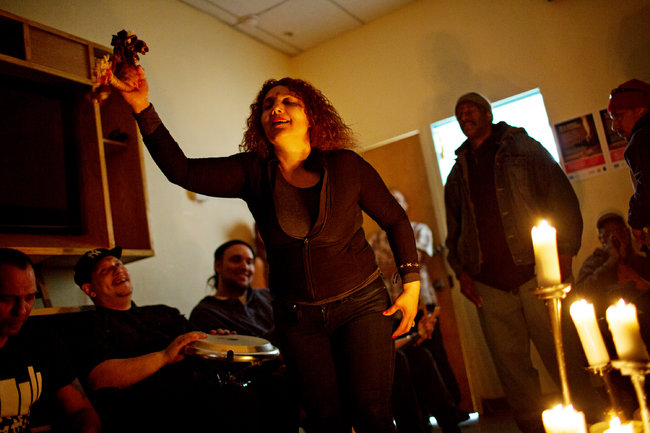 Julie Glassberg for The New York Times——Mr. Mugianis says his method has rid 500 heroin users of their addiction.

He became an apostle of two leading ibogaine advocates, Dana Beal and Howard Lotsof, and began making a modest living offering addicts the ibogaine cure, typically sequestering them for days in hotel rooms while they hallucinated and vomited their way to sobriety.

Mr. Mugianis says his method has rid 500 heroin users of their addiction. But he has also had some scares, including episodes in which two addicts went into seizures during treatment. To learn more about ibogaine, he began traveling to Gabon in 2006, the first of six visits so far.

“It was a remarkable homecoming,” he said.

After his arrest, he continued to treat addicts with Bwiti methods but not ibogaine, he said. This can include covering the addicts in white body paint and dressing them in a white sarong for a three-day session of purifying baths and sweat-lodge processes, as well as smoke purification, fire-dancing and other “healing technologies of music and dance” from Gabon.

Each Tuesday, he drives a group from the needle exchange to a wooded area along the Palisades in New Jersey to commune with nature and offer prayers.

The Thursday group, which he leads with a social worker, Brian Murphy, is called We Are the Medicine, because the healing is communal, said Mr. Mugianis, who worships with his fellow Bwiti followers at a temple in Queens. They hope to gain religious status and fight for the right to use ibogaine as a sacrament to end addiction.

No matter what, Mr. Mugianis said, the Bwiti spirit is all around us, even helping ex-addicts avoid stiff federal prison sentences.

“They took away my magic powder, so I thought they were my enemy, but now I realize we were dancing together,” he said. “Even the arrest was part of my initiation — it was a blessing.”

Peter Magubane: A Fighter With a Camera in Apartheid-Era South Africa