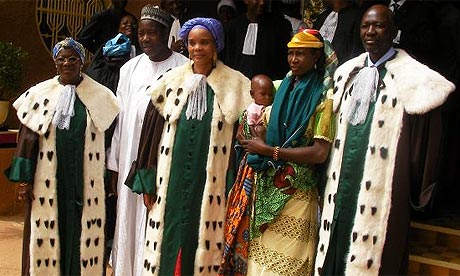 Hadijatou Mani (2nd from r) and her child with the judges outside the Ecowas court before her hearing in Niamey, Niger
What follows is a background document on slavery in Niger compiled byAnti-Slavery International. It assisted Hadijatou Mani in bringing herlandmark court case against the government of the country.

Slavery was abolished in Niger in 1960 (upon independence from France), prohibited in 1999 and criminalised in 2003.

How many slaves are there in Niger?

The minimum estimate is that 43,000 people are in slavery across Niger.
It is based on research by Timidria, a local human rights organisation, and Anti-Slavery International. The research involved more than 11,000 face-to-face interviews in six regions of the country, constituting the most comprehensive survey of slavery in Niger to date.

Slavery remains deeply embedded in Niger society. It exists across the country, in rural and urban areas, and is practised predominantly by the Tuareg, Maure (Berber Arab) and Peule (also known as Pulaar, or Fulani) ethnic groups.
Some Hausa follow the “fifth wife” practice – a form of slavery (see below). The Hausa (both in Niger and Nigeria) are sold their “fifth wife” by Tuareg masters.

How do people become slaves in Niger?

Virtually all cases of slavery documented in Niger concern individuals whose ancestors were enslaved many generations ago. Slavery status is ascribed at birth and passed on through the generations.
The Tuareg follow a complicated caste system that incorporates slaves at the bottom of society.
Tuareg culture does not allow people to marry outside their caste. It is significant that, in Niger, slaves identify themselves as Tuareg even if their ancestry technically belongs to African people enslaved by Tuareg raiders.
Nobles and warriors are at the top of Tuareg culture, and Islamic clerics, or marabouts, come next. Below them are free men, followed by casted groups such as blacksmiths and other occupations.
Below all these are freed slaves; the lowest rung is reserved for slaves. All these free and casted groups can have slaves – even slaves themselves, if they have the financial means.
A slave can be freed in Tuareg culture by his or her master, if they wish to appease Allah to make amends for an indiscretion, or simply out of kindness.
Historically, slaves could be freed if they acted with distinction and valour in battle. Despite this, freed slaves remain near the bottom of the Tuareg caste system, above only slaves.

What does it mean to be a slave?

Slaves have no rights and no opportunities in life.
In Niger, people are born into slavery and forced to work without pay for their so-called masters throughout their lives, primarily herding cattle or working on farmland, or as domestic servants.
Slaves are denied fundamental rights, and their masters exercise powers of ownership over them. Slaves are inherited, and given as gifts. Children may be taken away from their mothers at an early age.
Girls are forced to start work as domestic servants at a very young age, and are at the continual beck and call of their masters. They may be sexually abused by men in the household or forced to marry at a young age.
Women have spoken of living in constant fear of abuse, and rape is common.
Masters also consider that they have the right to demand the marriage dowry of their former slaves (which may consist of a bed, a tent or kitchen utensils). When a former slave dies, the master can demand the inheritance, even if the former slave has children.
Even when former slaves have been free for many years, the master will assume the right to approve their marriage or inherit their property.
Many slaves are not on the electoral roll, and so are not entitled to vote. This political exclusion enables those in power to maintain the status quo.

Slavery and the misuse of Islam

Slaves are told that, under Islam, their paradise is bound to their master, and that if they do what the master tells them, they will go to heaven.
This is a powerful mechanism of control, teaching those who are enslaved to follow orders and accept their fate or they will be forsaken by God and live outside Islam.
Without access to education or alternative means of subsistence, many believe that it is Allah’s wish for them to be slaves when in reality Islam dictates that a Muslim may not enslave a fellow Muslim.

Islam allows a man to take a maximum of four wives. However, in Niger, the practice exists of taking a fifth wife. These women are known as wahiya among the Tuareg and sadaka among the Hausa.
Sometimes men take several fifth wives. The fifth wife does not receive any of the status benefits of being a wife, as there is no actual marriage. She is, in effect, a slave to her “husband”.
In 2006, Timidria helped release 34 women known to have been sold as fifth wives in the Canton of Douguerawa. A further 12 were released in 2007.
Anti-Slavery International was able to interview 10 of the women, who complained they had been subjugated to forced and unpaid labour, rape and daily insults.