Parade of a Christian filà of the Moros i Cristians festival in Alcoi.

Moros y Cristianos (Spanish: [ˈmoɾos i kɾisˈtjanos]) orMoros i Cristians (Valencian: [ˈmɔɾoz i kɾistiˈans]) literally in English Moors and Christians, is a set of festival activities which are celebrated in many towns and cities of Spain, mainly in the southern Valencian Community; according to popular tradition the festivals commemorate the battles, combats and fights between Moors (or Muslims) andChristians during the period known as Reconquista (from the 8th century through the 15th century). 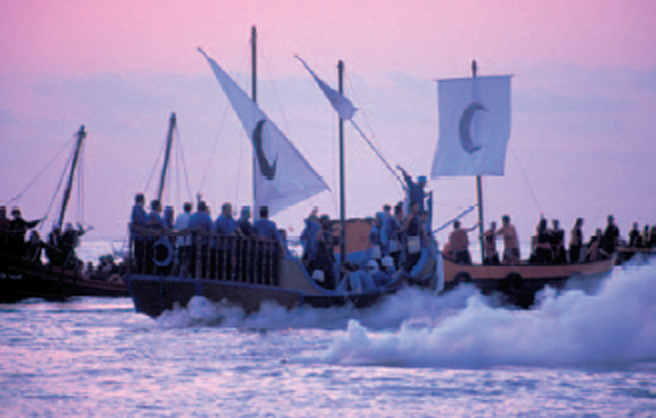 Parade of a Moors Ship in the beach ofLa Vila Joiosa, 2008.

The festivals represent the capture of the city by the Moors and the subsequent Christian reconquest. The people that take part in the festival are usually enlisted in filaes orcomparsas (companies that represent the Christian or Moor legions), and for several days, they parade with bombastic costumes loosely inspired by Medievalfashion. Christians wearfur, metallic helmets, andarmor, fire loud arquebuses, and ride horses.

In contrast, Moors wear ancient Arab costumes, carry scimitars, and ride real camels or elephants. The festival develops among shots of gunpowder, medieval music, and fireworks, and ends with the Christians winning a simulated battle around a castle.
The most well-known Moors and Christians festival takes place in Alcoi (Valencian Community) from 22 to 24 April, around the Feast Day of Saint George (Catalan: Sant Jordi, Spanish: San Jorge). According to legend, after James I of Aragon reconquered the city of Alcoi, the Moors, in turn, tried to recover it shortly after. But, when they were about to start the battle again, Saint George miraculously appeared to the Moors, who were frightened away.
Other remarkable Moors and Christians festivals are celebrated in the towns of Bocairent (Medieval town 1–5 February), La Vila Joiosa (with its desembarc), Villena with approximately 12,000 participants (most crowded festival), Biar, Cocentaina, Crevillent, El Campello, Elda, Muro d’Alcoi, Oliva (third weekend in July), Ontinyent,Orihuela, Petrer, Pollença and some districts of Alicante city. The most ancient festival is celebrated inCocentaina (nowadays in the Alicante province, but then was part of the Kingdom of Valencia), dated from 1586.

There are also very interesting Moors and Christians performances in Andalusia, especially in regions that were formerly part of the Moorish kingdom of Granada. Unlike the Moors and Christians pageants from Levante, the focus is here on the versed dialogues between the main contenders. Performances are mostly organized in rural towns and villages, such as Válor, Granada, a small pueblo in the Eastern Alpujarras.
A version of this festival survives in the Philippines in the form of the moro-moro play, staged during fiestas. The show begins with a parade of stars in their colorful costumes. Actors playing Christians wear blue costumes while those playing Moors wear red costumes and are fully ornamented.
There are also Moors and Christians traditions in Mexico, Guatemala, etc.

Rev. Jesse Lee Peterson Agrees With Newt Gingrich, Says He Would Send Blacks Back 'To The Plantation'