Who were the Moors?

The Moors were the medieval Muslim inhabitants of Morocco, western Algeria,Western Sahara, Mauritania, the Iberian Peninsula, Septimania, Sicily and Malta. The Moors called their Iberian territory Al-Andalus, an area comprising Gibraltar, much of what is now Spain and Portugal, and part of France. There was also a Moorish presence in present-day southern Italy after they occupiedMazara in 827  until their last settlement of Lucera was destroyed in 1300. The religious difference of the Moorish Muslims led to a centuries-long conflict with the Christian kingdoms of Europe called the Reconquista. The Fall of Granada in 1492 saw the end of the Muslim presence in Iberia.
The term “Moors” has also been used in Europe in a broader sense to refer to anyone ofArab or African descent, whether living in Spain or North Africa. Moors are not a distinct or self-defined people. Medieval and early modern Europeans applied the name to theBerbers, North African Arabs, Muslim Iberians  and West Africans from Mali and Nigerwho had been absorbed into the Almoravid dynasty.  Mainstream scholars observed in 1911 that “The term ‘Moors’ has no real ethnological value.”
The Andalusian Moors of the late Medieval era inhabited the Iberian Peninsula after theUmayyad conquest of Hispania in the early 8th century. The Moors’ rule stretched at times as far as modern-day Mauritania, West African countries, and the Senegal River.
Earlier, the Classical Romans interacted with (and later conquered) parts of Mauretania, a state that covered northern portions of modern Morocco and much of north western and central Algeria during the classical period. The people of the region were noted in Classical literature as the Mauri. Today such groups inhabit Mauritania and parts of Algeria, Western Sahara, Morocco, Niger and Mali. In the languages of Europe, a number of associated ethnic groups have been historically designated as “Moors”. In modern Iberia, the term is applied to people of Moroccan ethnicity. “Moor” is sometimes colloquially applied to any person from North Africa, but some people consider this usage of the term pejorative, especially its Spanish version “moro”.

Arms of the great Bristol merchant and shipper William II Canynges(d.1474), as depicted on his canopied tomb in St Mary Redcliffe Church, showing the couped heads of three Moors wreathed at the temples

Moors—or more frequently their heads, often crowned—appear with some frequency in medieval European heraldry. The term ascribed to them in Anglo-Norman blazon (the language of English heraldry) is maure, though they are also sometimes called moore, blackmoor, negro or occasionally savage. Maures appear in European heraldry from at least as early as the 13th century, and some have been attested as early as the 11th century in Italy, where they have persisted in the local heraldry and vexillology well into modern times in Corsica and Sardinia. Armigers bearing moors or moors’ heads may have adopted them for any of several reasons, to include symbolizing military victories in the Crusades, as a pun on the bearer’s name in the canting arms of Morese, Negri, Saraceni, etc., or in the case of Frederick II, possibly to demonstrate the reach of his empire.Even the arms of Pope Benedict XVI feature a moor’s head, crowned and collared red. Nevertheless, the use of moors (and particularly their heads) as a heraldic symbol has been deprecated in North America, where racial stereotypes have been influenced by a history of Trans-Atlantic slave trade and racial segregation, and applicants to the College of Arms of the Society for Creative Anachronism are urged to use them delicately to avoid creating offensive images.
http://en.wikipedia.org/wiki/Moors

Other European Crests/Flags
http://www.taneter.org/moorsheads.html
Austria
Abfaltersbach
The coat of arms of Abfaltersbach, a small town in the southern Austrian alps, is unique because in the way in which the Moor is portrayed. Holding the olive branch symbolizes peace–a direct contradiction to any false legend claiming these Moors were the heads of the captives or enemies. The combining of the head with the lion’s body can be traced to the sphinxes of Egypt and the Nubian lion god of Dedun. It’s worth mentioning that the lion’s body is depicted in a similar manner to those found on the coats of arms of European royalty as well as the government of Morocco.

Linkebeek
The coat of arms of Linkebeek features 3 “wreathed” Moor’s heads in a manner similar to that of nearby town, Lennik.

Lennik
According to town history, the coat of arms is descended from 1683 Gaasbeek family crest, which in 1691 changed to the seal of Corneille de Man (shown at right)

Waregem
Based on his clothing and golden crown atop his head, the Waregem Moor is clearly an African king or someone of high nobility. According to town history the present coat of arms was adopted in the 1970’s after the merger of several smaller municipalities. This followed one adopted in the 1890s that featured what appears to be a “black faced,” crowned Moor. The original, however, was a Baron von Plotho’s family crest. The Von Plotho family of Brandenburg, Germany was first documented by Otto I in 946 AD.
France
Corsica
The modern Corsican Moor’s head has been whitewashed with European features and today, many believe that the head is but a mere silhouette of a European man. Contrary to such claims, the Bastia Museum houses the original Corsican Moor’s head (as shown below) which has undeniably black features. Some Corsican legends tell that the head was a trophy of a defeated Saracen chief, or that it was the head of a slave. Nonetheless, the positive portrayal, pearls around the moor’s neck, and feminine qualities refute such legends. 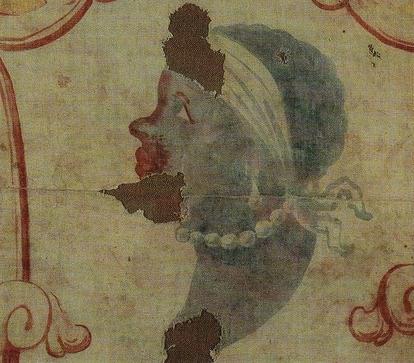 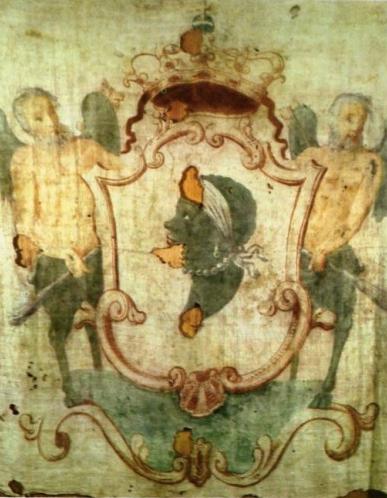 Veigy Foncenex
Germany
Coburg
Coburg, the ancestral home of the British royal family Saxe Coburg-Gotha, otherwise known as Windsor. The town is known for its picturesque castles and museums, but its most popular resident is the Coburg Moor which appears on the town’s edifices, coat of arms, and flag (as shown below). As previously mentioned, the town’s history tells that this was the catholic church’s patron saint from Thebes (Luxor), St. Maurice. Therefore, according to both the town’s history and the Catholic church, for which he is a patron saint, Maurice was an Egyptian. Again, we can see that the gold earrings and necklace, which could be symbolic of opulence and high regard. 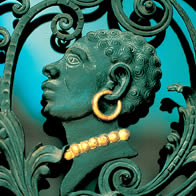 
Freising
The home town of Pope Benedict is adorned with a crowned-head Moor which may be seen at the Freising castle and on the town’s official coat of arms and flag.
The pope uses the same representation of the Moor on his official papal coat of arms. As the pope put it in his autobiography, the “caput aethiopicum” has been used by Freising bishops for over 1,000 years. More importantly, he admits that he does “not know its meaning.” Nonetheless, we are aware that legend tells of Abraham of Freising’s encounter with a bear and how his Black servant defeated this bear. Abraham promised to reward his servant, and did so by depicting his head on the town’s coat of arms. Although this legend explains why the pope has the bear on his coat of arms, the legend is still questionable since the Moor is crowned like a king. Regardless, the story and portrayal of the Moor affirms the presence of Blacks in Medieval Europe and their high status. Variations of this Moor can be found on nearly 20 municipal coats of arms throughout Germany. 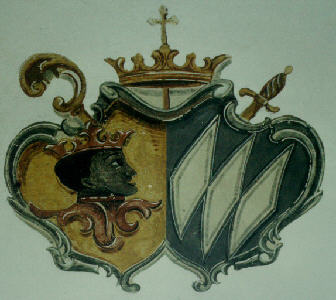 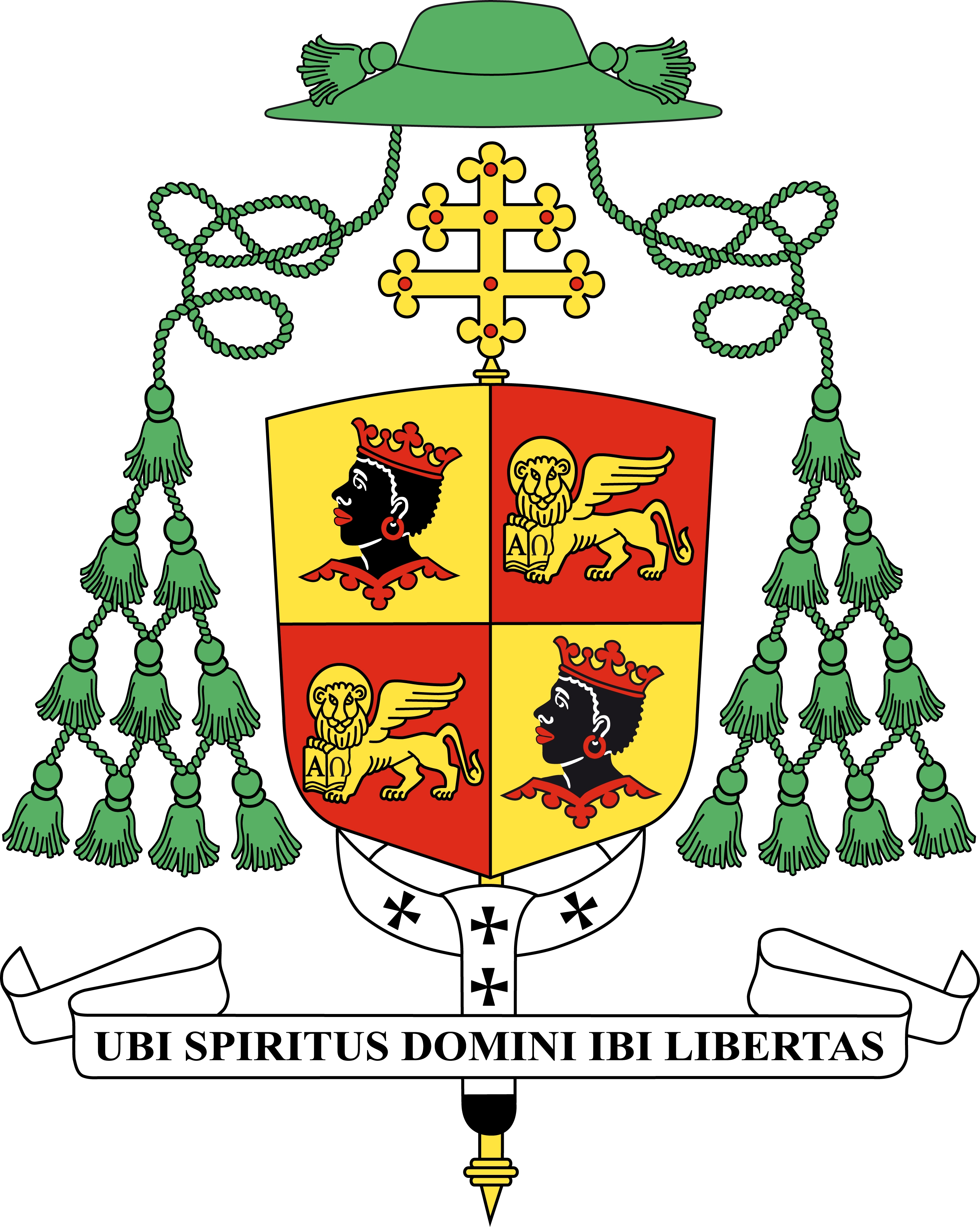 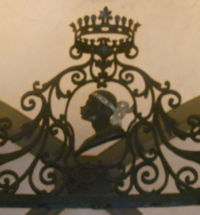 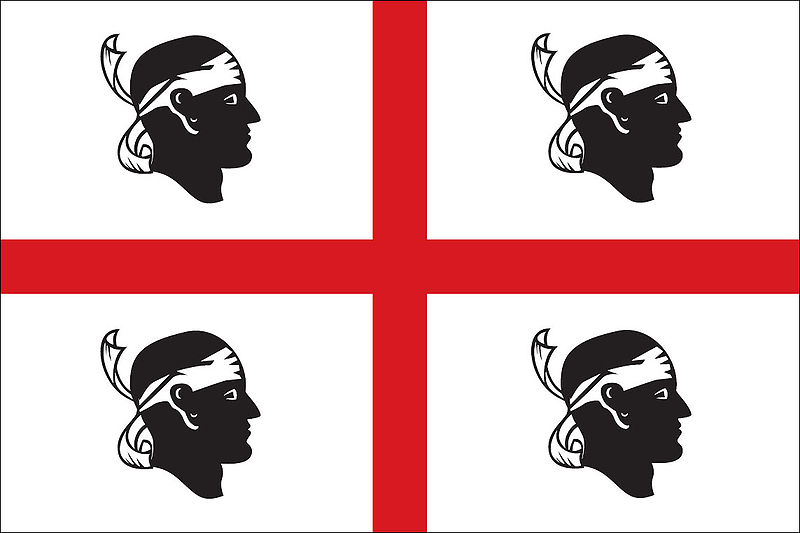 According to the Sardinian government, the flag became associated with Sardinia in the 1300s when the island became part of the Confederation of the Crown of Aragon. As such, the official history of Aragon claims that the Moor’s heads can be traced to the Battle of Alcoraz in which the Moors were defeated by Pedro I in 1096. However, the Cross of St. George superimposing the heads has led some scholars to suggest that this could be a representation of St. George, who was not only a saint, but one of the most admired knights of Europe. Interestingly, the British Museum houses a 1300 AD icon that is very similar to the murals of the 10th century Abreha Atsbeha church in Ethiopia.
Latvia
Riga 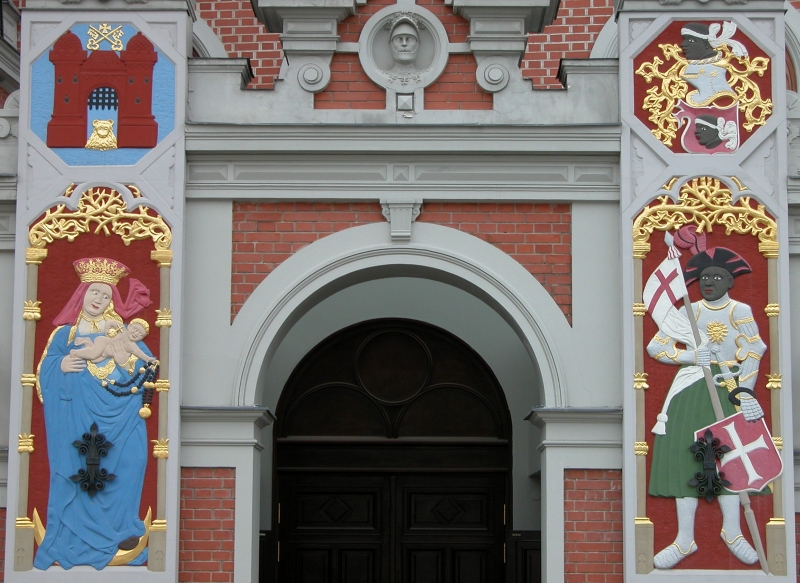 Riga’s most famous building, the House of the Blackheads, prominently features an armored St. Maurice (supposedly) below a representation of his head. According to town history, the building was originally constructed in the 1300s by the Brotherhood of the Blackheads who adopted St. Maurice as their patron saint. However, the story is somewhat questionable, considering that the Brotherhood was originally established by indigenous Latvians to rid their country of Christian invaders. 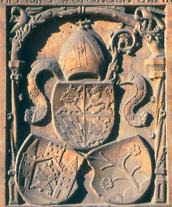 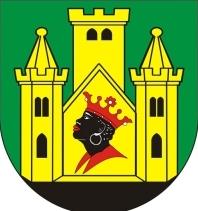 Slovenia
Skofja Loka
The crowned Moor represented on this 1000-year old town’s coat of arms and flag is directly related to the aforementioned Freising moor. The town is located in territory granted to Bishop Abraham of Freising in 973 AD. 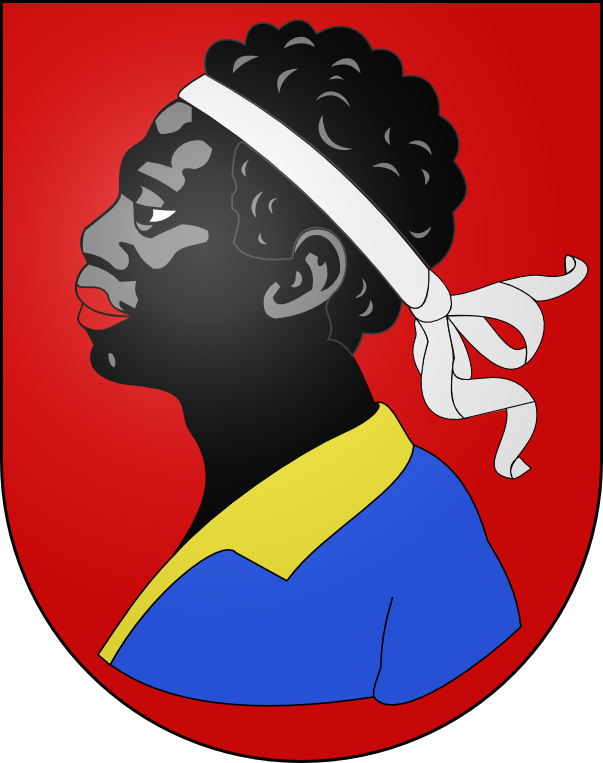 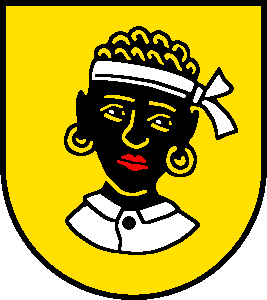