A mother in Arkansas was arrested on Wednesday for telling her children to beat up a school bully who her youngest daughter claimed stabbed her with a pencil.

Temika McClure, 26, of Conway, faces seven charges – including one of second degree battery – based on the testimony of witnesses to the scene that unravelled on a public school bus on August 30.

According to the police, McClure climbed aboard the bus, confronted the nine-year-old boy in question, and then instructed her son, seven, and older daughter, 12, to ‘handle that s***.’ 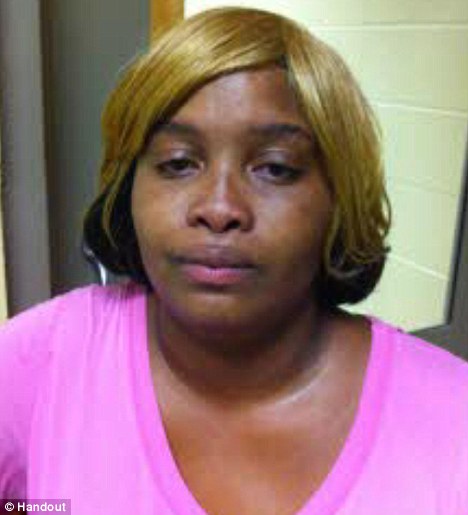 Who’s the bully? Temika McClure from Conway, Arkansas is charged with instructing her children to beat up a boy who allegedly stabbed her daughter with a pencil

LaTresha Woodruff, Public Information Officer at Conway Police Department told MailOnline it was unclear when McClure’s five-year-old daughter had informed her mother about the alleged bully.

But she said, ‘[her mother] was at the bus stop, lying in wait’ for the boy when it stopped at the corner of 1st and Ingram streets.

Video footage of the incident and the ensuing fight that broke out among the three children was captured by the bus driver’s surveillance camera but withheld by police due to the presence of minors.

Driver, Carl Renfro, claims to have asked McClure repeatedly to leave the vehicle while demanding the children stop fighting but when his pleas fell on deaf ears, he radioed for assistance. 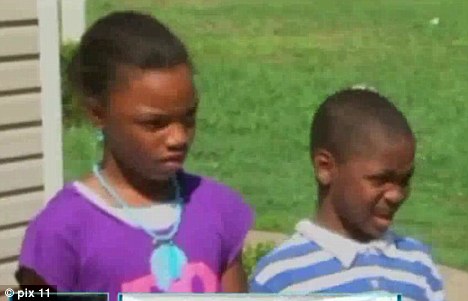 Loyalty: McClure allegedly told her daughter and son to get back on the bus and ‘handle’ the issue but says she’s innocent of second degree battery

As the children continued beating on the boy, an unidentified man got on the bus and finally managed to break up the violence.

Ms Woodruff told MailOnline she believes he may have been the children’s father as before he climbed aboard, McClure was shouting to the children to go and fetch their dad.

In interviews since making bond on Wednesday, McClure is denying the allegations that hold her responsible but, said Ms Woodruff who has viewed the footage, ‘what she says is just not true.

‘Those kids knew what she meant when she said “handle that s***”. They didn’t ask questions and she didn’t stop it, she just watched while shouting things like “you don’t put your hands on a five-year-old”‘.

Police have confirmed that the youngest daughter did indeed have marks on her body concurrent with the story of the pencil stabbing, and that the boy who was attacked sustained minor injuries.

The school district, that is yet to determine punishment for the children, turned over evidence to the prosecutor who decided to file charges against their mother.

McClure confidently told Pix 11: ‘I’m not worried about it because I know we were not in the wrong.

‘Because when it’s all said and done, why am I being charged for a kid fight?’

Herman Cain and the black conservative movement: 'Don't call me a Republican'