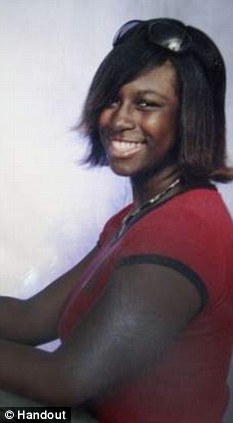 Freak accident: Adaisha Miller would have turned 25 on Monday

The family of the woman who was fatally shot while out celebrating her upcoming 25th birthday are left with many unanswered questions while planning her funeral.

Adaisha Miller was killed after the gun in a police officer’s holster unexpectedly went off while she hugged him at a party.

The married officer, who has not been named, claims that he did not know Ms Miller and that she turned up to a party at his house with a group of her friends.

The lawyer for the Detroit police department called the tragic incident ‘a fluke accidental shooting’.

‘They were having a party and the next thing, a woman is dead. He’s devastated by what happened,’ lawyer John Goldpaugh told The Detroit Free Press after having spent time with the officer in question.

While the police have said that Ms Miller hugged the officer from behind, her mother was told by friends that her daughter ‘was being a little flirty’ with the man and hugged him face-to-face.

The bullet punctured Ms Miller’s lung and hit her heart, and she died at a hospital.

‘For this to happen to her, whether they want to call it freak accident or mistake in judgment, it should have never happened to my child, and there’s nothing I can do to get her back,’her mother Yolanda McNair told WDIV-TV.

She is now left questioning why the officer had his loaded gun on him while off duty, since that is not required by the department.

‘Why do you need a weapon with a round in the chamber?’ she told the Free Press.

The lawyer said that the physical evidence at the scene matches the officer’s description of the incident, but he will still remain on administrative duty until the shooting is fully investigated by the internal affairs division.

Ms Miller graduated from Redford High School in Detroit before going to Everest College in California to receive her degree in massage therapy.

‘All she wanted to do was enjoy the weekend for her birthday,’ her mother said.

‘She had every right to enjoy turning 25 and look beyond that.’

Samuel L. Jackson: ‘I Voted For Barack Obama Because He Was Black’

Making the World a Fairer Place