MSNBC apologizes for misspelling analyst’s name as a slur
By: The Associated Press 02/07/2002
NEW YORK (AP) — MSNBC has apologized for a typographical error that turned the name of an interview subject into a racial slur.
The network on Monday aired an interview about the Enron case with Republican consultant Niger Innis. The onscreen graphic identifying Innis, who is black, had an extra “g” in his first name.

Shortly after it appeared, correspondent Gregg Jarrett offered Innis a “profuse apology.”
“Oh, God, I thought you guys thought I was a rapper or something,” Innis replied. “Media bias continues. Just kidding. It’s not the first time it’s happened, but hopefully it’s the last.”
It was strictly a typographical mistake, network spokesman Mark O’Connor said Thursday. He wouldn’t say whether any disciplinary action was taken against the person who made the blunder.

This is a screenshot of how the incident appeared on live tv: 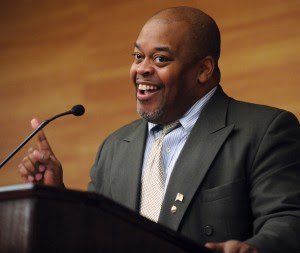 Read an article from the Washington Times about the 2002 Niger Innis “NIGGER” Incident and other MSNBC gaffes below:

By Kerry Picket – The Washington Times

*Updated 4/11/12
*According to the New York Times, an NBC source  said on Friday that a “seasoned” producer who edited sound of the 911 call between George Zimmerman and a 911 dispatcher was fired. The producer, who remains nameless, edited a video segment included the 911 call before Zimmerman shot and killed 17 year-old Trayvon Martin on February 26. Zimmerman claimed self-defense.
However, the broadcasted 911 call is edited to make Zimmerman sound as if he is a racist. NBC’s Today show first broadcasted the edited version of the 911 call with the package suggesting that Zimmerman volunteered Martin’s race. “This guy looks like he’s up to no good. He looks black.”
However, the portion of the tape that was deleted was the dispatcher’s question to Zimmerman about Martin’s race. The dispatcher asked Zimmerman if Martin was “black, white or Hispanic,” and Zimmerman responded, “He looks black.” This editing issue was first noticed by the Media Research Center, who broke the story. MRC’s Brent Bozell is calling on Congress to investigate Comcast and NBC for Journalistic fraud for the network’s Trayvon Martin coverage.
According to the New York Times:

NBC News has fired a producer who was involved in the production of a misleading segment about the Trayvon Martin case in Florida. The person was fired on Thursday, according to two people with direct knowledge of the disciplinary action who declined to be identified discussing internal company matters. They also declined to name the fired producer. A spokeswoman for NBC News declined to comment. The action came in the wake of an internal investigation by NBC News into the production of the segment, which strung together audio clips in such a way that made George Zimmerman’s shooting of Mr. Martin sound racially motivated… On April 4, the network news division said in a statement that it deeply regretted the “error made in the production process.” “We will be taking the necessary steps to prevent this from happening in the future and apologize to our viewers,” the network said. It did not specify what steps it would take. But one day later it dismissed a Miami-based producer who had worked at NBC for several years. The people with direct knowledge of the firing characterized the misleading edit as a mistake, not a purposeful act.

Unfortunately, this is not the first time an edit or circumstance like this occurred at one of the NBC networks.
The Water Cooler blog reported In 2009, MSNBC’s Chris Matthews stated that the 911 caller who reported Harvard law professor and Obama friend Henry Gates to the police to be a racial profiler. This charge from Mr. Matthews turned out to be untrue. In fact, the 911 caller, Lucia Whalen, later described the racist accusations she received over Dr. Gates’s arrest. Mr. Matthews’s broadcast was likely no help to her circumstances at the time.
In 2009, MSNBC’s Contessa Brewer criticized an Arizona tea party protester who was legally open carrying a firearm in his holster.
“A man at a pro-health care reform rally…wore a semiautomatic assault rifle on his shoulder and a pistol on his hip….there are questions about whether this has racial overtones….white people showing up with guns.”
However, the video failed to show that the individual with the holstered firearms was black tea party protester.
Another egregious MSNBC “mistake” happened during a live 2002 broadcast. Conservative black activist and national spokesman for the Congress of Racial Equality Niger Innis appeared for an interview on the network. The lower third graphic misspelled his name with two “g’s” instead of one.
The on-air racial gaffe resulted in an apology from the MSNBC host (who is now with Fox News) an hour later and a statement from MSNBC spokesman Mark O’Connor:
“We regret this unfortunate typographical error that was made to Mr. Innis’ first name. We immediately corrected the error in the on-screen graphic and apologized to our guest on the air.”
MSNBC never released the name(s) of the individual(s) responsible for the graphic and the story disappeared as quickly as it surfaced. NBC is hoping the same will happen this time around. Considering the amount of incitement the edited version of the 911 call elicited, this story is not going away anytime soon.
Read more: http://www.washingtontimes.com/blog/watercooler/2012/apr/9/picket-nbcs-latest-editing-mistake-follows-history/print/#ixzz2Knktjzqq