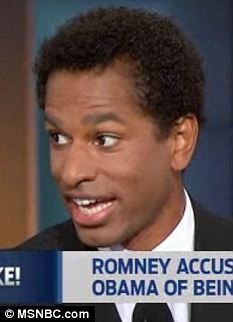 ‘Racial coding’: Toure made the controversial comments about Romeny on MSNBC’s The Cycle

An MSNBC host has apologised for describing Mitt Romney ‘s campaign tactics as the ‘n***erisation’ of Barack Obama.

Toure, a critic on The Cycle, had used the term when accusing the Republican presidential candidate of engaging in racially-charged rhetoric against the President.

He had been discussing aggressive comments made by Mr Romney against Mr Obama during a campaign speech in Ohio on Tuesday, in which  the Republican said the President should take his ‘politics of division and anger back to Chicago’.

Romney himself was responding to Vice President’s Joe Biden race blunder when he told an audience of black students that the Republican party would ‘put y’all back in chains’.

The MSNBC host claimed Romney was engaging in ‘racial coding’ by portraying Obama as an angry black man.

He said: ‘You notice he says ‘anger’ twice. He’s really trying to use racial coding and access some really deep stereotypes about the angry black man.

‘This is part of the playbook against Obama. The otherization, he’s not like us. I know it’s a heavy thing to say. I don’t say it lightly. But this is ni–erization. You are not one of us, and that you are like the scary black man who we’ve been trained to fear.’

But he today apologised, saying: ‘On yesterday’s show in discussion about the presidential race, I used a word to make a point. In retrospect, I muddied the discussion by using the ‘N-word,'” he said at the end of the opening segment. “I could’ve made my point without that word. I shouldn’t have used it, and for that I’m sorry.’

The Romney campaign is said to have contacted MSNBC executives about the remarks, which were met with anger by the conservative members of The Cycle’s panel.

On the show, S.E. Cupp accused Toure of being ‘so irresponsible’ as she pointed out the liberal commentator only saw Romney’s remarks as racial coding – and not Biden’s initial comments that sparked the furore. 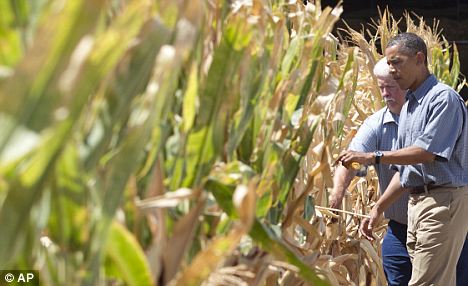 Controversy: President Barack Obama inspects drought damaged corn on the McIntosh farm on the campaign trail in Iowa this week

‘Joe Biden made the overtly racial comment and has a history of making bigoted remarks, Mitt Romney was responding to that remark and yet he is the one responsible for the whole Republcian history of racism in politics?’

Toure justified his remarks saying that the Republicans were ‘a constituency all-white party that rejects the black vote.’

The issue was sparked by Vice President’s Joe Biden’s remarks to an audience at the Institute for Advanced Learning and Research in Danville, Virginia.

He told an audience of several hundred black supporters: ‘Romney wants to, he said in the first 100 days, he’s gonna let the big banks again write their own rules, unchain Wall Street.’ 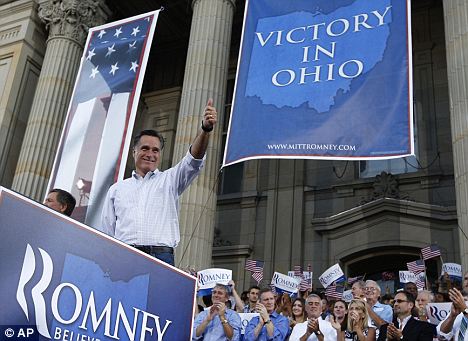 Fightback: Mitt Romney fired back atthe remarks by Joe Biden during a speech in Ohio

Then lowered his voice and added: ‘They are going to put y’all back in chains.’

He told voters in Ohio: ‘Mr. President, take your campaign of division and anger and hate back to Chicago,’ Romney said at an Ohio event, where hundreds of coal miners and their families had earlier stood in line to attend.

‘His campaign and his surrogates have made wild and reckless accusations that disgrace the office of the Presidency.  Another outrageous charge came a few hours ago in Virginia. And the White House sinks a little bit lower.’