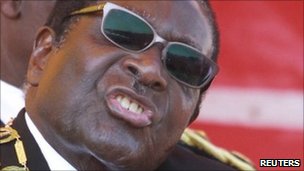 Nato is a terrorist organisation – akin to al-Qaeda – because of its bombing campaign in Libya, Zimbabwe’s President Robert Mugabe has said.

He said the group’s continued targeting of the Libyan leader and his family was against international law.

Rebels have been fighting forces loyal to Libya’s Col Muammar Gaddafi with Nato’s support since March.

Nato acts under a UN mandate authorising military action for the protection of civilians in Libya.

Nato forces have been enforcing a no-fly zone over Libya – carrying out air strikes on military targets.

The 87-year-old Zimbabwean leader made his comments at a gathering to remember fighters who died in Zimbabwe’s fight against white minority rule.

The speech lasted for an hour-and-a-half and was punctuated by attacks on the West, reports the BBC’s Brian Hungwe from the capital, Harare.

“They seek to kill Gaddafi,” he said. “They have in fact deliberately killed some of his children. Now when they do that deliberately, it is exactly what the Taliban and al-Qaeda do – what is the difference in terms of what they [Nato] are doing? 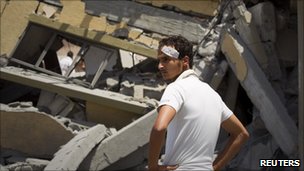 “That’s why I say Nato is now a terrorist organisation as well,” he added, to cheers from the crowd.

“If it defies international law it has no rules and goes out blatantly wanting to kill – that’s brazen murder, assassination, who then can respect it as a law-abiding organisation?”

He warned that Western countries could attack any other African country if Nato was allowed to do as it pleased on the continent.

With elections due next year, Mr Mugabe, whose Zanu-PF party is in a coalition with the Movement for Democratic Change, also hit out about sanctions, our reporter says.

Targeted US and European Union sanctions remain on Mr Mugabe and some of his key allies, despite the formation of the unity government in 2009.

During his speech, Mr Mugabe repeated threats that companies owned by Western countries operating in Zimbabwe would be expropriated.

“We will have to discriminate against countries that impose sanctions on Zimbabwe,” he said.

“Why should a company that belongs to Britain be allowed to mine our gold? If they are to continue to operate here then the sanctions must go.”

Mr Mugabe blames the country’s economic woes on sanctions, while his opponents say they are the result of years of mismanagement.