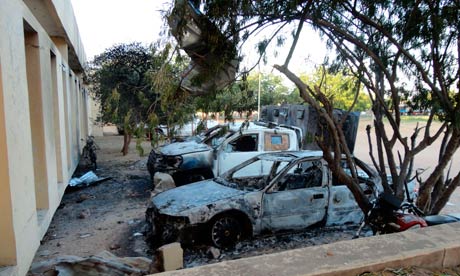 More than 100 people have been killed in a series of attacks in north-east Nigeria by a radical Muslim sect, a Nigerian Red Cross official said on Sunday.

Ibrahim Bulama said he expected the figure to rise as local clinics and hospitals assess the casualties from the attacks on Friday in Damaturu, the capital of rural Yobe state.

The sect, called Boko Haram, also killed a police inspector on Sunday in the city of Maiduguri, the sect’s spiritual home about 80 miles (130 kilometers) east of Damaturu. Sect gunmen stopped the officer’s car at gunpoint as he neared a mosque to pray with his family, local police commissioner Simeon Midenda said.

Gunmen ordered the family away, then shot the inspector, Midenda said. The sect members later allowed his family to drive the car away, he said.

The killing prompted a frank acknowledgment from the police commander, whose men remain under siege from constant assassinations by the radical sect. “Our men who live in the midst of the Boko Haram are not safe,” Midenda said.

In a statements the UN security council called the attacks “criminal and unjustifiable” and asked members to help the Nigerian authorities bring those responsible to justice.

Pope Benedict XVI on Sunday appealed for an end to all violence, saying it only increases problems, sowing hatred and division even among the faithful. He told tourists in St Peter’s Square that he is following with apprehension the news from Nigeria.

Boko Haram claimed responsibility for the attacks on Friday, which included suicide bombings and shootings.

Boko Haram wants to implement strict sharia law across Nigeria, an oil-rich nation of more than 160 million which has a predominantly Christian south and a Muslim north. Its name means “western education is sacrilege” in the Hausa language, but instead of schooling, it rejects western ideals such as Nigeria’s US-styled democracy, which followers believe have created corrupt politicians who have destroyed the country.

Boko Haram’s attacks occurred ahead of the Eid al-Adha celebration, the feast of sacrifice. Police elsewhere in the country had warned of violence ahead of the celebration in Nigeria.

An Associated Press count shows the group has killed at least 361 people this year alone.

College professor suspended for saying school is racist against blacks and showing pornographic documentary to students.