The remains of a bejewelled Anglo-Saxon woman discovered in a burial site beside a cow have been described as a ‘bizarre find’ by archaeologists.

It is thought the grave, which was unearthed in Oakington, Cambridgeshire, by Manchester Metropolitan and Central Lancashire university students, is the first of its kind to be discovered in the UK.

Researchers initially believed the animal skeleton was a horse, but after further analysis it emerged that the woman’s bones were actually lying alongside those of a cow. 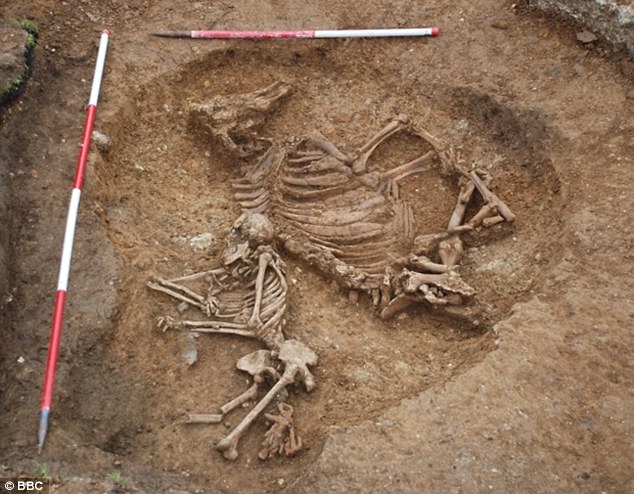 Bizarre: Archeologists have found the remains of a bejewelled Anglo-Saxon woman buried next to a cow

While human skeletons – from male warriors – have previously been uncovered next to horses the discovery of the woman next to a cow which dates from the 5th century, is believed to be a fresh sight.

There are only 31 horse burials in Britain and they are all with men and student Jake Nuttall said the team had been excited when they thought the find was a horse, but he said the discovery that it was a cow made it ‘even more bizarre.’

The female skeleton was found with brooches and hundreds of amber and decorated beads. 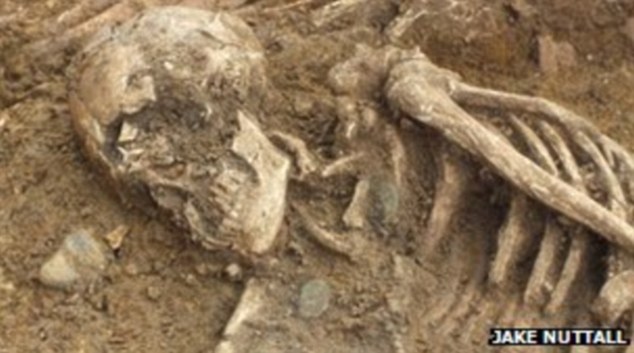 Wealthy: The female skeleton was found with brooches and hundreds of amber and decorated beads

She also had a complete chatelaine [keychain] set, which is an iron girdle and a symbol of her high indicating she was of a high standing in society.

Co-director of the excavation, Dr Duncan Sayer, from the University of Central Lancashire, reportedly told the BBC: ‘This is the first animal to be discovered with a woman from this period and it’s really interesting that it’s a cow, a symbol of economic and domestic wealth and power.

‘It’s also incredibly early to find any grave of a woman buried with such obvious wealth.’

The findings point to the woman having access to the community’s wealth with Dr Sayer speculating that she was a member of the regional elite. The objects are believed to describe her identity to the people who attended her funeral.

Dr Faye Simpson, from Manchester Metropolitan, said a decision to sacrifice a cow would not have been taken lightly because its tremendous source of food and the huge cost of rearing it.

Dr Sayer said the find was so special she didn’t anticipate discovering anything as significant in her lifetime.