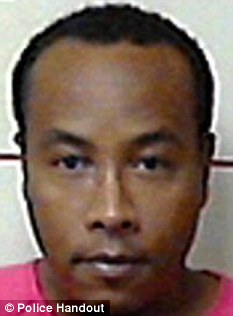 Accused: Michael Parnell Parson was secretly engaged to another woman at the time of his wife’s shooting

A man accused of shooting his wife eight times in April was leading a double life and was secretly engaged to someone else.

Parson had told Ms Harner, who had no idea that he was already married, that his wife was his aunt.

For a while the navy veteran managed to fool both his family and his fiancée.

In the days after the shooting, Parson perfectly played the concerned and grieving husband.

During the day he held a vigil by his wife’s bed as the lawyer, who he married in May 2009, recovered from her injuries, which included three shots to the head.

But at night he stayed at a hotel with his lover.

However, it wasn’t long before his web of deceit became tangled, reports AJC.com.

Police first became suspicious of Parson when he said he’d been receiving treatment for cancer at the time of the shooting.

However, cell phone records show that he was in or near the area of the couple’s Sandy Springs home when Mrs Parson was shot.

An unwitting friend of the accused, Deontae Robinson, told the police that Parson had asked him to go to the hospital, pretending to be him. 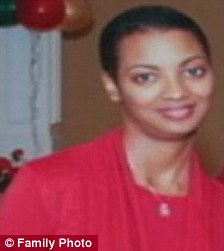 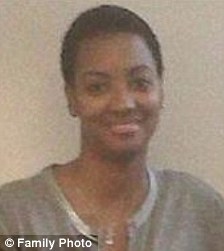 Attempted murder: Adina Parson [left and right] was shot eight times outside the apartment she shared with her husband. She is still recovering in hospital

‘[Mr Robinson] did not know about all the lies that M. Parson had been living and felt used by M. Parson,’ state the warrant records obtained by ABC News.

Police also found firearms and ammunition, as well as drugs and marijuana, in Parson’s garage.

They obtained the search warrant after Parson appeared to have abandoned the family home and fled.

Parson was eventually arrested in Texas after a routine stop by a state trooper who ‘noted immediately that Mr Parson was extremely nervous as if his adrenaline was high’.

After his driving license and ID were checked, he was charged with aggravated assault, aggravated battery, making false statements, possession of a firearm while committing a felony and marijuana possession.

Despite her severe injuries, Adina Parson is recovering at the Shepherd Center, an Atlanta hospital that specialises in spinal rehabilitation, and is improving on a daily basis, says her family.

Parson’s first wife, Ying Amat, with whom he has a 17-year-old son and remains close to, said she found it hard to reconcile the elaborate story with her ‘good man, good dad’ ex-husband.

‘This is not the Michael I knew,’ she said.

In another interview, Ms Amat said that ‘it’s almost like he’s a Dr Jekyll and Mr Hyde’.

Parson and Ms Amat divorced in 1999 after six years of marriage.