Dozens of Zimbabwean MPs are due to be circumcised in parliament today as part of a high profile anti-HIV drive in the country.

Up to 68 politicians are to voluntarily go under the knife to show their commitment to fighting the killer disease in the African nation.

The MPs are all due to undergo the operation today at a makeshift clinic set up inside the parliament building in Zimbabwe’s capital Harare. 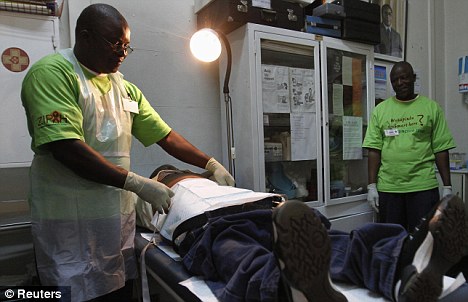 Under the knife: A doctor performs a circumcision on an unidentified Zimbabwean politician in Harare today, as the country’s anti-HIV drive continues

The scheduled surgery is part of a high profile anti-HIV drive organised by the campaign group Zimbabwe Parliamentarians Against HIV and Aids.

He said: ‘The response by MPs was very high and we are now doing group counselling sessions to prepare us for the main event on Friday.

Mr Chebundo told NewsDay all uncircumcised male MPs were being encouraged to undergo the operation, which is thought to reduce the risk of HIV infection by up to 60 percent.

He added that female parliamentarians had been invited to bring in their male spouses to take part in the novel public scheme.

The MPs’ circumcisions form part of a major campaign against HIV in Zimbabwe. 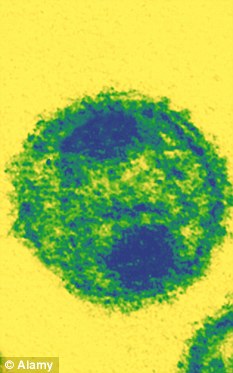 Deadly: Around a million people are said to be infected with HIV in Zimbabwe

Around a million people in the country are believed to be infected with the deadly sexually-transmitted disease, which if left untreated can lead to the break down of a patient’s immune system.

The figure represents around 14 percent of Zimbabwe’s population but is a vast improvement on higher levels of HIV prevalence seen in previous years.

Around 70,000 men are believed to have been voluntarily circumcised since 2009 as part of a government drive to tackle the disease.

The suggestion that MPs should sign up to the scheme was made last year by Zimbabwe’s deputy prime minister Thokozani Khupe.

At the time many MPs spoke out aggressively against the idea.

However dozens have since agreed to take part in the programme in the belief doing so publicly could help tackle the stigma of HIV.

The killer disease is controllable with drugs and Zimbabwe is one of several African countries which has seen its rate of infection decline.

However experts believe thousands of people remain at risk of becoming infected due to unsafe sexual habits and poor education about the disease.

The problem is widely believed to be exacerbated by a stigma around HIV which prevents some people from discussing it or even agreeing to have their status tested.

13 yr. old Boy who suffered chronic nightmares after his mother's cancer diagnosis, publishes book about how he coped