A terrified staff member at a New Jersey supermarket declared ‘I don’t want to die’ as she begged 911 dispatchers to send help after a co-worker opened fire with an AK-47.

The shocking call is one of a number released by Middlesex County yesterday, capturing the intense fear pulsating through employees at the Pathmark supermarket where ex-marine Terence S. Tyler shot dead two colleagues and then himself in a horrific early morning gun spree on August 31.

The frantic callers describe how they locked themselves in storage spaces and made mad dashes through parking lots to get away from Tyler, who had previously tweeted about murdering his workmates. 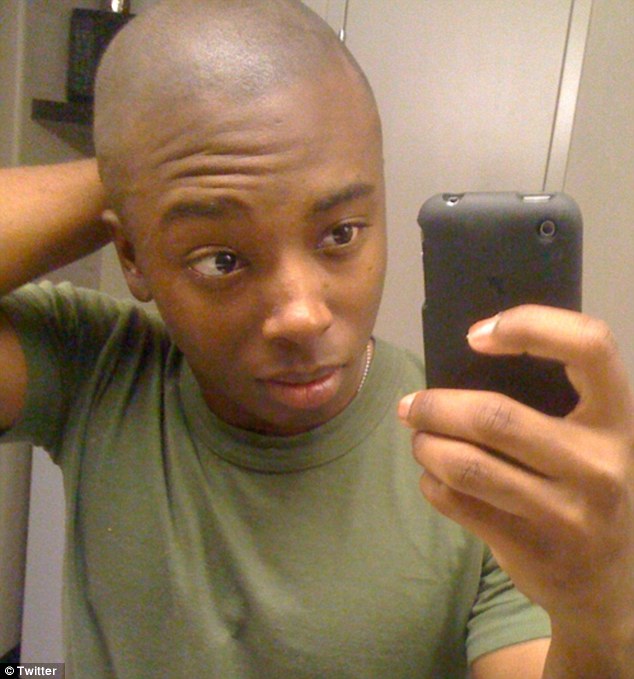 Shooter: Terence S. Tyler, 23, served in the U.S. Marines Corps. from 2008 to 2010, and most recently held the rank of lance corporal and was a rifleman

In one call, a woman, breathing heavily and clearly fearing for her life, begged the dispatcher to hurry up and send police to the supermarket.

‘Get here, help me, please… Pathmark. They are shooting here… they’re shooting,’ she said.

When the dispatcher asks the identity of the gunman, the caller said she didn’t know and explained that her and other colleagues were hiding in a storage area.

‘I don’t know, we are locked in a back room. We locked ourselves in,’ she said.

Then, extremely shaken up, she adds: ‘Please hurry up. I don’t want to die, please.’

The dispatcher goes on to ask: ‘And you don’t know if anybody was shot or not, right?’

But her co-workers, Cristina Lobrutto, 18, and Bryan Green, 24, were likely already dead. 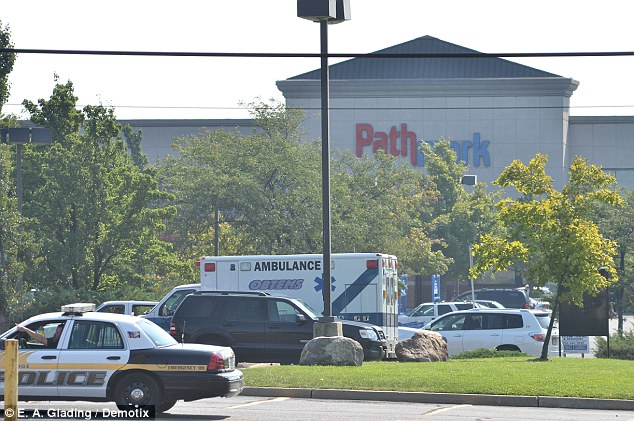 Crime scene: Police and emergency vehicles at the Pathmark supermarket where the shooting occurred 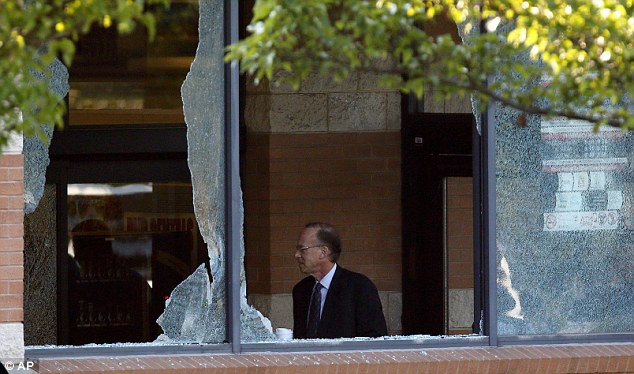 Smashed: Middlesex County prosecutor Bruce Kaplan is seen through two broken windows as he arrives at the scene of a shooting at a Pathmark grocery store in Old Bridge, New Jersey

The names of callers were deleted by Middlesex County prosecutors because the investigation into the horrific shooting is continuing, according to NBC News.

Other workers on the overnight shift called again, laying bare the chaos and fear pumping through the ravaged supermarket.

‘There’s a guy with a shotgun and he’s blowing the place apart,’ a man explained in one call.

He already new the gunman was a co-worker.

‘Yeah a former marine,’ he said before telling the female dispatcher that the gunman was wearing protection clothing.

When the man is told to calm down he explains that he is in the line of fire.

‘I’m actually running, getting shot at,’ he said.

On another call, an employee is trying to work out whether the shooter had been caught, fearing he may sneak up on him. 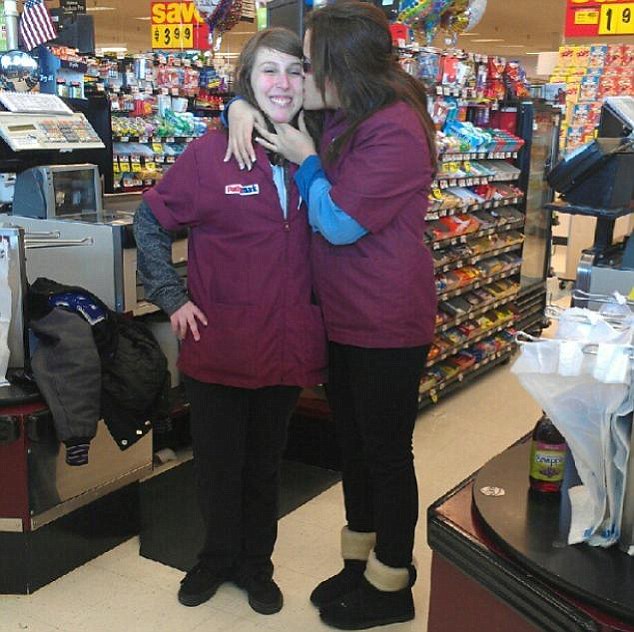 Unlucky: Cristina Lobrutto (left) with an unnamed friend in her Pathmark uniform

‘I don’t know where the shooter is. Did they find…’

The dispatcher told him to ‘just stay down and hide’ before insisting ‘we have officers all over the place.’

Fearing for the safety of the public, he told the woman: ‘I don’t want the shooter to be running outside the store.’

Earlier this month, it was revealed that Tyler had tweeted about killing his co-workers in 2009, back when he was still in the military.

Unhappy with his life as a Marine stationed in California, the shooter posed a question three years ago on Twitter: ‘is it normal to want to kill ALL of ur coworkers?’

‘I’m starting to see why plp go on killin sprees,’ he wrote in the disturbing message, adding that the people around him were pushing his ‘kill everyone I see button.’

Additional tweets from Tyler include a gushing post about Adolph Hitler, where he refers to the Nazi leader as ‘one of the greatest military minds,’ in 2007. 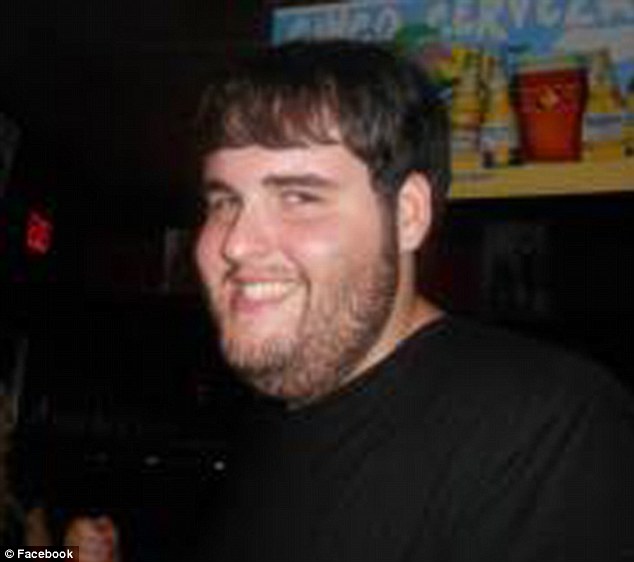 Shot dead: Bryan Breen who along with Cristina Lobrutto was shot to death by their colleague Terrence Tyler

He also informed his followers in 2009, that he wanted to dress up as OJ Simpson for Halloween, ‘get his jersey with the throwback glove,’ in a reference to the former NFL player accused of murdering his wife and her lover.

Simpson was acquitted of the murder charges in 1995.

Tyler’s Twitter messages were sent during his time in the military, when police say he struggled with depression – believed to have been brought on by the death of his mother in 2007.

His shooting rampage last month came three days before what would have been her birthday.

After he left the Marines, due to his mental health issues, he started working at the Pathmark supermarket in New Jersey.

But on August 31, the 23-year-old, dressed in camouflage and armed with an AK-47, opened fire in the store in Old Bridge Township and fatally shot two co-workers – one of which was Lobrutto who in a terrible twist of fate was covering a shift for a friend.

Police said Tyler had argued with colleagues earlier that morning, left the Old Bridge store for his car, returned around 4am and killed Lobrutto and Green who were stacking shelves before the scheduled 6am opening.

Employees told police they saw Tyler coming towards the entrance of the popular supermarket with his guns and locked the door – but the shooter shot out two windows, walked inside and killed his co-workers and then himself. 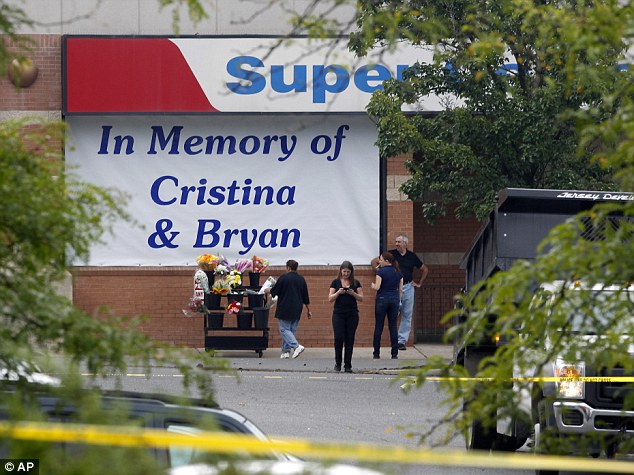 In memory: Flowers gathered outside the closed Pathmark supermarket in Old Bridge, where two workers were killed and others hid from gunman Terence S. Tyler

A neighbour of Cristina was left distraught by the death.

‘Why does an 18-year-old have to lose her life,’ said Carolyn Anders. ‘Heart of gold, always smile on her face.’

The three dead had all been working the night shift at the Old Bridge Pathmark.

One law enforcement official said that Tyler entered into an argument with unspecified other co-workers and at around 3.30am left the store, got into his car and drove away.

Kaplan said that approximately 20 minutes later he returned dressed in camouflage clothing and armed with an AK-47 and an automatic handgun and shot out two windows after staff locked the door to stop him entering when they saw him approach.

Entering into the store, Tyler reportedly shot at a group of five people standing in an aisle and hit and killed Lobrutto and Breen.

‘We don’t know what triggered it,’ said Tyler’s uncle, Christopher Dyson to NBC.Com.

Lobrutto, who turned 18 in May, started working at the Pathmark in June 2011, according to her Facebook page.

Kaplan said that at the moment police have no motive for the killings or Tyler’s suicide.

Pathmark’s corporate owner issued a statement of sympathy to the victims and their relatives. 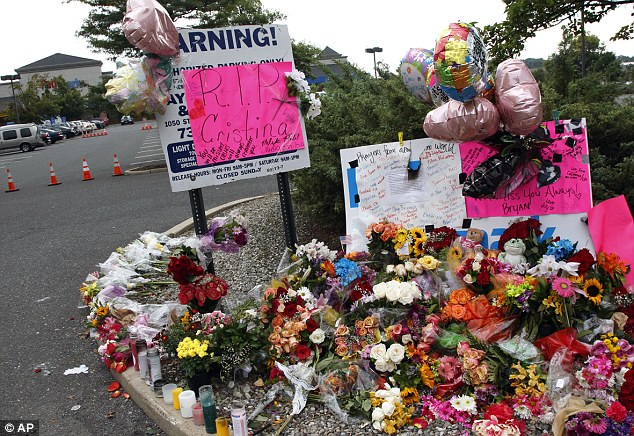 Shrine: Friends and family construct a makeshift shrine, pictured, at the supermarket for Cristina Lobrutto, who was killed while covering a shift for a friend 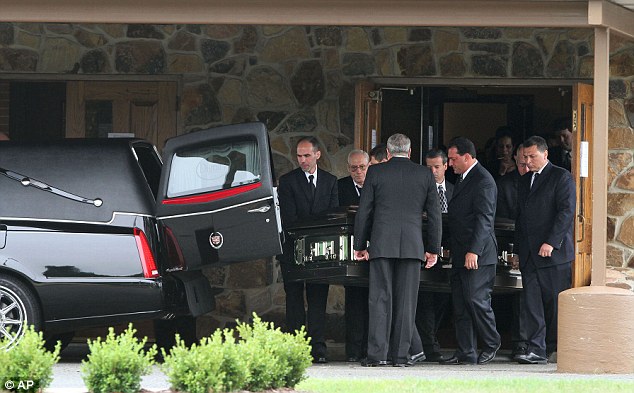 Funeral: Pallbearers carry the casket of Cristina LoBrutto, 18, following her funeral on September 6

‘We are terribly saddened by the incident at our Old Bridge Pathmark store this morning,’ said the Great Atlantic & Pacific Tea Co.

‘We express our deepest sympathies to the families of the victims and our appreciation to local law enforcement.’

The heavily armed staff member fired 16 shots from the AK-47 as he killed Lobrutto and Breen.

‘Two of the employees were shot and killed,’ said Kaplan. ‘The others were able to hide and escape.’

Heavily armed S.W.A.T. police swarmed to the Pathmark at around 4.30am but did not engage Tyler as he had already taken his own life by the time they arrived.

Tyler, 23, left the U.S. Marines Corp in 2010 and a military spokesman said that he held the rank of lance corporal and was a rifleman.

Before moving to New Jersey, Tyler lived in Brooklyn, but during his time in the Marine he was stationed in Palms, California. 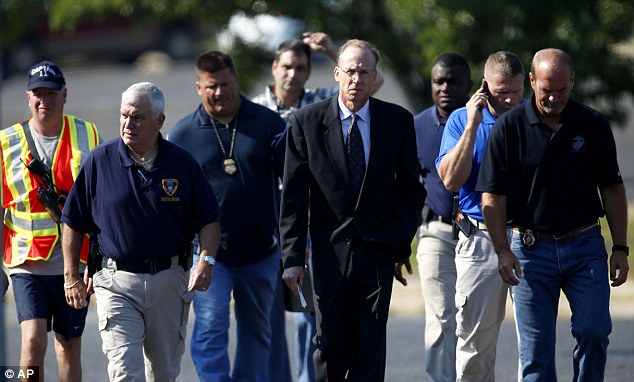 On his Facebook page, the ex-Marine posted the chilling words, ‘Be Optimistic – All the people you hate are going to eventually die.’

Listed as graduating in 2007 from George Westinghouse Career and Technical Education High School in Brooklyn, his Facebook page declares his interests to be ‘sports and hitting the gym’.

Masase Acheampong, 25, a friend of the gunman said that he was shocked by the shootings and that he was ‘a normal kid’.

‘That’s why I am shocked, I would never have guessed it in a million years.’

When police arrived at the store which is 25-miles from New York City they moved the employees to a nearby T.G.I. Friday’s where they were checked out by emergency workers.

‘This is the worst phone call a mayor can receive,’ said the mayor of Old Bridge Owen Henry.

‘You can prepare for these things but you can’t prevent them.’

Mayor Henry confirmed the man left the store earlier in the morning and then returned wearing camouflage gear and brandishing an Ak-47 and an automatic pistol. 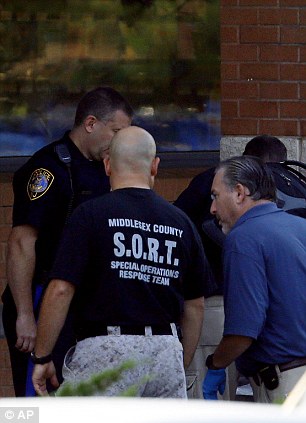 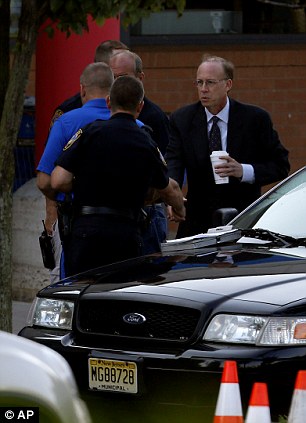 SWAT teams: Officials investigate the scene of a shooting at a Pathmark grocery store in Old Bridge, New Jersey as Middlesex County prosecutor Bruce Kaplan, (right), arrives at the scene

The mayor also said that the ex-marine’s fatal wound was self-inflicted and he added that police were in the process of notifying the families of the victims.

The shooter may have had a history of depression or mental illness, a source told NBC.Com

Police said that they received a telephone call around 4.30 a.m. informing them that shots were being fired from inside the supermarket.

Witnesses inside said that there were around a dozen staff stacking shelves before opening.

Old Bridge is a bedroom suburb of about 65,000 about 25 miles from Manhattan but just across the Raritan Bay from Staten Island.

The incident came just weeks after a series of mass shootings shook the country.