Touring the United States for the London Times, the war correspondent William Howard Russell reached New Orleans late in May 1861 to find a city ablaze. Confederate flags flew from the public buildings and private homes. Soldiers paraded through the streets in smart columns of dash and pomp. Gentlemen at the St. Charles Hotel pored over the latest papers for news of the dawning war. The police were rounding up suspected abolitionists, and every night mysterious fires flared up around the city – set, it was rumored, by the slaves.

After hobnobbing with politicians, planters and merchants, Russell observed that the Confederate elite “believe themselves, in fact, to be masters of the destiny of the world.” But they soon discovered they were not even masters of their own homes.

New Orleans was a slave city: its fortunes depended on the slave-based sugar and cotton plantations of the lower Mississippi Valley, and the buying and selling of people was a big local business. More than 13,000 enslaved people (1 out of every 12 residents) lived in the city itself in 1860, working as stevedores, carpenters, valets, cooks and laundresses. Some were hired out and earned wages for their owners. Women made up a majority of adult slaves, performing “domestic” labor for masters and mistresses who could be just as abusive as any whip-wielding plantation overseer. 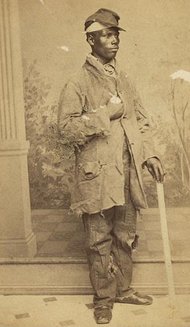 Yet daily routines took household slaves out to the city streets and shops, gave them the chance to socialize with friends and family and find refuge in hideaways outside their masters’ gaze. Their skills as laborers, and their networks of kinship and community, would aid them when the Union Army arrived in May 1862, barely a year after the war began.

The Union “occupation” of New Orleans was also a liberation, if that is the appropriate word to describe the gnarled process of emancipation that took place there. Freedom did not arrive on board David Farragut’s warships; the Union had not yet committed to a policy of emancipation. Nor did it arrive with the Emancipation Proclamation on Jan. 1, 1863, which exempted the city and other territory once part of the Confederacy but no longer “in rebellion.” And yet slavery began to crumble in New Orleans from the moment Union troops arrived. The letters and diaries of Confederates in New Orleans in the weeks and months after the Federals arrived were already filling with despair and rage at the loss of authority over their slaves. What was going on?

We tend to look back at emancipation as a series of official acts. But in many places, including New Orleans, it was the result of local initiative as much as Union policy. In occupied New Orleans, slaves quickly recognized that the balance of power had shifted away from their owners, and they took advantage.

Many slaves, for example, ran away to the Union Army. Hundreds fled to Camp Parapet, a fortification just above the city, where the abolitionist commanding officer, Brig. Gen. John W. Phelps, welcomed them. Even those who were thought to be most loyal to their owners ran off. “There are many instances in which house-servants, those who have been raised by people, have deserted them,” complained Clara Solomon, a teenager in the city.

Slaveowners felt robbed by the Federals and betrayed by their slaves. Owners claiming to be loyal to the Union petitioned for the return of their human property, sparking a controversy on “the negro question” between Phelps and Gen. Benjamin Butler, commander of the Department of the Gulf. The hard-nosed Butler was famous for his ingenious policy of confiscating slaves as “contrabands of war” in Virginia, but he did not want to wreck Louisiana’s sugar plantations or alienate white Unionists. He thought that Phelps had crossed the line by fomenting slave unrest. “We shall have a negro insurrection here I fancy,” Butler confided to his wife.

Butler and Phelps clashed, too, over Phelps’s arming of black soldiers at Camp Parapet. Phelps resigned, but Butler eventually came around to the wisdom of the policy. By the end of 1862, black men – both free and slave – were joining the Union Army in southern Louisiana in droves. When asked whether slaves would fight their masters, one man told a Union officer, “Just put the gun into our hands, and you’ll soon see that we not only know how to shoot, but who to shoot.” The recruitment of black soldiers ate away at slavery, especially in Louisiana, which was credited with supplying over 24,000 black men to the Union Army, more than any other state.

Less well known are the contributions of enslaved women to the hastening of emancipation. Barred from battle, enslaved women fought daily skirmishes with masters and mistresses in their own kitchens and courtyards. They talked back. They refused to be beaten. They ran away, and returned with bayonets. “Our servants do pretty much as they please,” protested Ann Wilkinson Penrose, whose son was off fighting in the Confederate Army. Penrose’s torrential diary chronicles her family’s loosening grip on their slaves after the arrival of the Union Army and offers a striking example of what the historian Thavolia Glymph calls “the war within” slaveholding households.

Simmering resentments boiled over on April 14, 1863. Penrose was angry at Becky, her cook, for baking bad bread and cakes. She went into the kitchen, slapped Becky, and “asked her how she dared to send in such bread & cakes.” Becky took offense. “She started up, looked furiously at me, and exclaimed, ‘don’t you do that again, let it be the last time, or I’ll just march out of this yard’” Becky was told to hush or else a policeman would be called in. As Penrose recounts, Becky retorted that “she might send for whom she pleased she didn’t care.”

Penrose didn’t send for a policeman; her family decided it wouldn’t have done any good. The police were now on the slaves’ side, they believed. Becky’s defiance – and Penrose’s inability to punish her for it – signaled the demise of slavery in New Orleans. The institution crumbled in New Orleans not from a single dramatic blow or stroke of a pen, but from the slow accumulation of resistance by slaves like Becky.

The law eventually caught up with the facts on the ground. Early in 1864, Union Gen. Nathaniel Banks (who had replaced Butler as commander of the Department of the Gulf) recognized that Louisiana’s state constitutional provisions and laws concerning slavery were “inconsistent with the present condition of public affairs” and declared them “inoperable and void.”

Finally, in September 1864, more than two years after the arrival of Union troops, Louisiana’s all-white electorate ratified a new State Constitution that formally abolished slavery in the state. Heartened by the summer’s debates over emancipation, one black soldier predicted that “under God, this will yet be a pleasant land for the colored man to dwell in.”