The untold story of how cats came in from the wild to commandeer the finest armchairs and win over the internet has been laid bare by a comprehensive analysis of ancient feline DNA.

Drawing on genetic material from mummified cats in Egypt, and remains from Viking graveyards and stone age sites, researchers pieced together how cats first came to live with humans and ultimately spread around the world as their companions.

Scientists extracted DNA from the bones, teeth, hair and skin of more than 200 long-dead animals found at sites in the Near East, Africa and Europe. The material shows that all tamed cats today descend from the African wildcat or Felis silvestrislybica, a subspecies found in North Africa and the Near East.

Having established the root of our relationship with cats, the scientists found that the path to domestication probably began when early farmers in the Near East began to stockpile grain about 9,000 years ago. From that moment on, there was no looking back.

“With the invention of agriculture, stocks of grain built up in villages, the stocks attracted rodents, and the rodents attracted cats,” said Thierry Grange, a senior researcher on the team at the University of Paris Diderot. Once the animals proved their worth as pest exterminators, the relationship appears to have blossomed.

Further DNA specimens suggest that migrating farmers took cats with them as they moved into Europe, with remains in Bulgaria and Romania dating to 6,000 years ago. But as the researchers describe in Nature Ecology and Evolution, more cats arrived in a second wave of domestication that had its roots in Egypt.

African cats dominated the mummified felines found in Egypt and the same species spread to Europe in the Roman era where for a time they were more popular than the cats that arrived from the Near East. The DNA from one cat came from the ancient Red Sea port of Berenike where the Romans traded from 2,000 years ago. The Vikings carried cats on their boats too, to keep rodent stowaways under control at sea.

“When you go to sea, you are totally dependent on the food you take with you, and you have ropes and other organic matter on board,” said Grange. “If rodents destroy all that, it’s a disaster.” 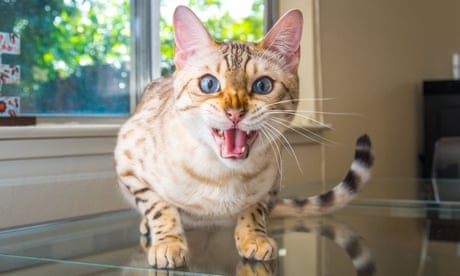 Cat got your tongue? Study to examine if pets adopt owner’s accent

It was only in the middle ages that a genetic mutation that produces tabby cat markings appeared, first in south-west Asia and then in Europe and Africa, marking the time when humans moved beyond simply living with cats to breeding them for fancy coats and other characteristics.

And while the process of taming cats and bringing them into the home has brought them closer to humans, the animals are still arguably the most aloof and murderous of household animals. “The cat is probably the wildest of the domestic animals,” said Grange. “And part of that is living its own life and not caring too much about there being humans around.”