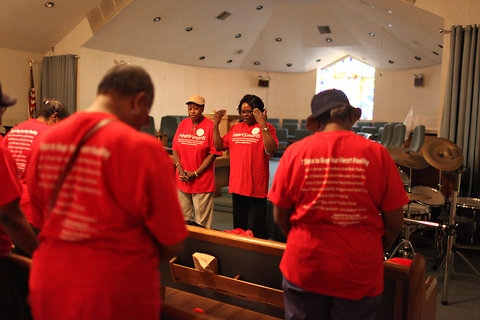 Inside Mt. Olivet Gospel Church in Corona, Queens, about a dozen older African-American women, some of them overweight, were perched in the pews reading intently. But they were not focused on the Bible. Instead, it was information on maintaining a healthy heart.

Then they prayed, calling on God to grant their group the power to apply what they learned. “Father, help us to use it in a good way and to share it with someone else,” said Margaret McHenry, a member of the congregation who helped lead the class.

Similar gatherings are being held this summer in churches throughout New York City, part of a new strategy aimed at blacks and Latinos who have high rates of heart ailments caused by being overweight.

Organized by the Ronald O. Perelman Heart Institute at NewYork-Presbyterian Hospital/Weill Cornell Medical Center, the program brings together science and religion. Heart disease is the leading cause of death in the United States, according to the Centers for Disease Control and Prevention.

The program seeks to use faith and lessons from the Bible to persuade minority congregants to embrace healthier lifestyles.

Brenda Marshall-Stewart, a congregant who led the class at Mt. Olivet Gospel Church, said that the Bible might be a more effective motivator for members who take their faith seriously. And because congregants tend to trust their pastors or fellow congregants, they might be more willing to heed their advice than the words of doctors they see only periodically.

During the 10-week course, participants learn about desirable cholesterol levels and heart rates and set specific goals that they review at every meeting.

For Viola Thom, 68, who attends meetings at Flatbush Seventh-day Adventist Church in Brooklyn, the program has made her a closer reader of labels at the grocery store. She has eliminated a lot of cheeses from her diet and is eating more fruits and vegetables.

“I don’t like it, but I’m doing it because it’s good for my heart,” Ms. Thom said. The Bible has played a key role, she said. “It reinforces it very much because if it’s in the book we want to do it.”

Alema Ashley-Love, 56, works at a nursing home and attends the classes at Mt. Olivet in Corona. She takes pills for diabetes and has high blood pressure, she said. One session included a review of a chart depicting healthy weight ranges.

“I didn’t think I was fat until I looked at that chart,” she said.

That helped motivate her. “I want to live longer,” she said. And, she added, Jesus didn’t die so that she could live an unhealthy life.

The classes have been held in about 18 churches throughout the city. They are led by church members and pastors who first go through an extensive training regimen run by Dr. Naa-Solo Tettey. The training includes the same curriculum covered in the classes, including Bible verses to be used – though ministers are free to add their own. By the end of the training, the instructors are armed with an arsenal of data, quotes and religious wisdom.

While the curriculum is currently designed around Christian scriptures, Dr. Tettey said she hoped that the program could expand beyond Christian denominations when new classes start in the fall. The Heart Institute plans to assess whether the program yields tangible health benefits among participants.

At the Flatbush Seventh-day Adventist Church, classes are run by the Rev. Richard Calhoun. One participant, Beverly Henry, 59, said the program had coaxed her into walking more.

She has also replaced white bread with whole wheat bread and is reducing the amount of salt in her diet. It has been an adjustment, she acknowledged. “I know that it’s helping a lot,” she said. “I’m getting into it.”

The Bible has been a source of inspiration, Ms. Henry added. “It goes hand and hand. What the Bible is saying is true.”

Mr. Calhoun said many of his congregants could not wait until the fall classes start.

“I think that it’s an eye-opener,’’ he said, “that this is part of my Christian experience.”