The New York City Board of Health has voted to require Jewish parents to sign a written consent form that warns them about the risk of their sons contracting herpes via direct oral contact from a rabbi during a ritual circumcision.

The move follows the deaths of two children who contracted the herpes virus through a type of ritual circumcision. The ritual is commonplace in parts of the ultra-Orthodox Jewish community, although it is rarer in other branches of Judaism.

The 5,000-year-old religious practice of circumcision is performed during a Jewish religious ceremony known as the bris. 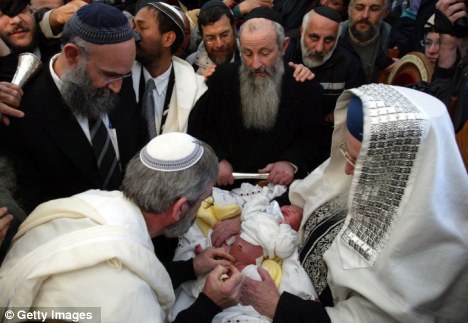 In the most controversial part of the ritual, known as ‘metzitzah b’peh’, the practitioner, or mohel, places his mouth around the baby’s penis to suck the blood to ‘cleanse’ the wound.

But city health officials say the mohel’s safeguards, which include rinsing with Listerine before the procedure, sterilizing tools, scrubbing hands with surgical soap and being tested annually for pathogens, are insufficient.

The main virus that worries the city is oral herpes, which is present in some 70 per cent of the city’s adult population and can cause fatal infections in babies. Highly contagious, it is spread through contact with infected saliva, even by sharing drinks or towels.

The health board wants parents to be aware of the risk of herpes transmission when a circumcision procedure, or bris, includes direct oral contact. 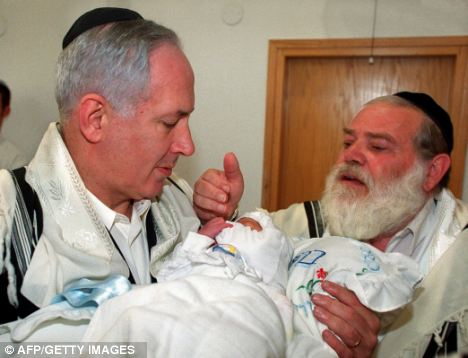 The 5,000-year-old religious practice of circumcision is performed during a Jewish religious ceremony known as the bris

In 2003 and 2004, three babies, including a set of twins, were infected with Type 1 herpes; the cases were linked to circumcision, and one boy died. Another died in 2010.

In the last decade, 11 babies in the city have contracted the virus, and two have suffered brain damage, according to health officials.

Dr Jay K Varma, the New York City deputy commissioner for disease control, told the New York Times, ‘There is no safe way to perform oral suction on an open wound in a newborn.’

But some rabbis have said that they will oppose the law on religious grounds, insisting it has been performed ‘tens of thousands of times a year’ worldwide. They say safeguarding the life of a child is one of the religion’s highest principles. 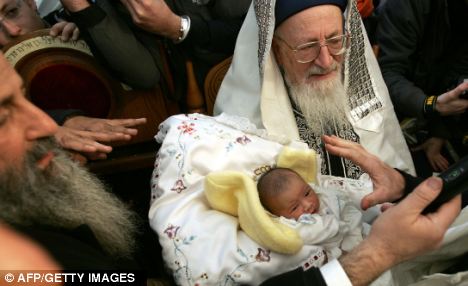 But Dr William Schaffner, chair of preventive medicine at Vanderbilt University, told ABCNews.com during the investigation of one of the deaths last spring, ‘It’s certainly not something any of us recommend in the modern infection-control era.’

‘This is a ritual… that’s come down through the ages, and now it has met modern science,’ he said. ‘It was never a good idea, and there is a better way to do this.’

The modern Jewish community uses a sterile aspiration device or pipette to clean the wound in a circumcision. 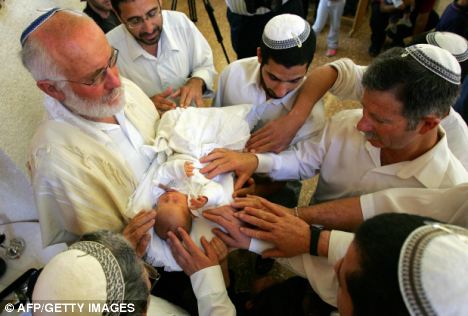 About two-thirds of boys born in New York City’s Hasidic communities are circumcised in the oral suction manner, according to Rabbi David Zwiebel, executive vice president of the Orthodox Jewish organization Agudath Israel of America.

The Department of Health argues parents should be informed of the risks before making a decision. Since 2004, it has received ‘multiple complaints from parents who were not aware that direct oral suction was going to be performed as part of their sons’ circumcisions,’ according to a public notice.

The measure, which Mayor Bloomberg strongly supported, is understood to be the first governmental regulation of the ritual in the United States.

It would not affect the way most Jewish ritual circumcisions are performed – gauze or a sterile pipette is used to pull blood from the wound – nor will it ban the practice.

But the issue being raised in New York coincide with moves in Denmark, Germany and other countries toward restricting or banning infant circumcision.

A Language Explorer Who Heard Echoes of Africa

Queen Nzinga of Ndongo and Matamba