Mayor Cory Booker is known for his social media savvy, having helped direct emergency services in Newark, New Jersey to stranded citizens during snowstorms and field questions during Hurricane Sandy.
Now he’s taking the talk offline as he bet a Twitter trash-talker that he could live healthfully on food stamps for a month.
The Democratic politician got into a dispute with a woman on Twitter who took issue with his dispelling of some free advice via Plutarch.

‘An imbalance between rich and poor is the oldest and most fatal ailment of all republics,’ Booker wrote on Sunday morning.
User @MWadeNC took issue with the quote, as it could be interpreted as a call to redistribute wealth.
The debate progressed from there, with the woman arguing that it is not the place of the government to insure that everyone maintains high nutritional standards, but Booker responded that it is when it comes to children who need to be ‘ready 2 learn’ at school. 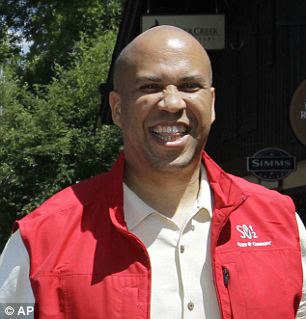 Talking tech: Mayor Cory Booker is very active on Twitter and has over a million followers and he regularly carries out conversations with them online 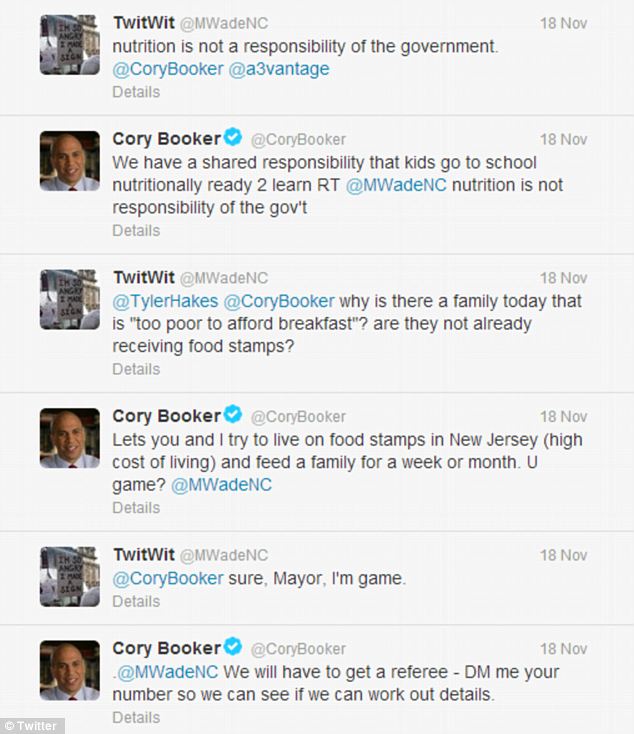 The argument took it’s marked turn when the Twitter user made a slight about food stamp recipients, saying ‘why is there a family today that is “too poor to afford breakfast”? are they not already receiving food stamps?’
Booker responded: ‘Lets you and I try to live on food stamps in New Jersey (high cost of living) and feed a family for a week or month. U game?’
Following up on the logistics, the user- whose real name has yet to be revealed- agreed and the Mayor called for a referee to make sure that the challenge was upheld.

The University of Bridgeport in Connecticut, which is already organizing a similar challenge for its students, agreed to serve as a moderator. 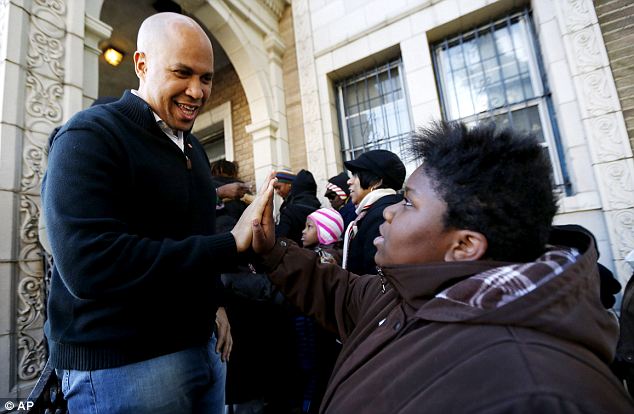 Helping out: Newark Mayor Cory Booker is known for opening himself up to needy citizens, and now he is putting his meal plan up for a bet
For their version of the challenge, each participant can only spend $35 on food and drinks per week and they must avoid loopholes like free food from friends or at catered events.
The Mayor has yet to speak out about the prospect of the challenge coming to fruition outside of the Twittersphere, but the wheels are in motion and his more than 1,200,000 followers will likely serve as witnesses.

Guns and Mothers: 2 Female Advocacy Groups on both sides of Gun Control Debate