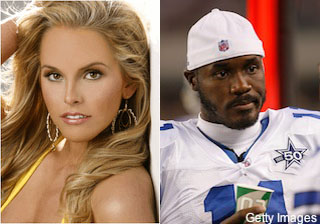 Dallas Cowboys receiver Roy Williams is going to court to get back the $76,000 engagement ring he gave to a former beauty pageant winner.

In February, Williams proposed to his girlfriend, Brooke Daniels. When she turned him down, Daniels didn’t return the ring. According to Williams’ affidavit that was filed in a Texas court last week, he asked for the ring back but was told by Daniels that she had lost it. An insurance investigation later revealed that Daniels’ father was in possession of the ring.

Michael Daniels told the Odessa American that his daughter will return the ring to avoid the lawsuit even though he says he has documentation saying Williams told her to keep it.

Pretty standard stuff, right? Minus the price tag, this is a dispute that probably happens every day in the United States. Except it’s not because most people don’t propose the way Roy Williams did.

From the Odessa American:

Williams has declined to comment for the story, but in an affidavit signed by Williams, he claims he sent $5,000 for school and dental bills, a baseball for Daniels’ brother and — as a surprise — a recorded marriage proposal with the ring through the mail just before Valentine’s Day to Daniels. However, when Daniels declined the proposal, she did not return the ring.

He recorded a marriage proposal and then sent the ring through the mail? Unless you’re a soldier stationed overseas, that’s just about the lamest thing I’ve ever heard. If you proposed through the mail, wouldn’t you not want other people to hear that? I’d consider eating the $76,000 just so I didn’t have to tell anyone.

It’s a shame Daniels is giving the ring back and avoiding trial because we may have learned the specifics of how Williams went about this process. Was it a video proposal? Did he record it in song form? And how did she reject him, with a return receipt?