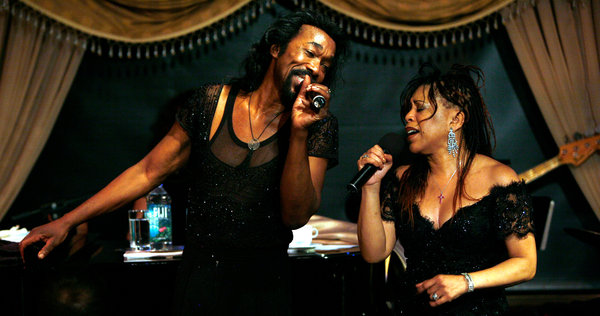 Nick Ashford and Valerie Simpson performing in 2006 at the Regency Hotel in Manhattan.

Nick Ashford, who with Valerie Simpson, his songwriting partner and later wife, wrote some of Motown’s biggest hits, like “Ain’t No Mountain High Enough“ and “Ain’t Nothing Like the Real Thing,” and later recorded their own hits and toured as a duo, died Monday at a hospital in New York City. He was 70 and lived in Manhattan.

Mr. Ashford had throat cancer and was undergoing treatment, but the cause of his death was not immediately known. His death was announced by Liz Rosenberg, a friend who is a longtime music publicist.

One of the primary songwriting and producing teams of Motown, Ashford & Simpson specialized in romantic duets of the most dramatic kind, professing the power of true love and the comforts of sweet talk. In “Ain’t No Mountain High Enough,” from 1967, their first of several hits for Marvin Gaye and Tammi Terrell, lovers in close harmony proclaim their determination that “no wind, no rain, no winter’s cold, can stop me, baby,” but also make cuter promises: “If you’re ever in trouble, I’ll be there on the double.”

Gaye and Terrell also sang the duo’s songs “Your Precious Love,” “Ain’t Nothing Like the Real Thing” and “You’re All I Need to Get By.” Diana Ross sang their “Reach Out and Touch Somebody’s Hand,” and when she rerecorded “Ain’t No Mountain High Enough“ in 1970, it became the former Supreme’s first No. 1 hit as a solo artist.

“They had magic, and that’s what creates those wonderful hits, that magic,” Verdine White of Earth, Wind and Fire told The Associated Press after learning of his friend’s death. “Without those songs, those artists wouldn’t have been able to go to the next level.”

Nickolas Ashford was born in Fairfield, S.C., and raised in Willow Run, Mich., where his father, Calvin, was a construction worker. He got his musical start at Willow Run Baptist Church, singing and writing songs for the gospel choir. He briefly attended Eastern Michigan University, in Ypsilanti, before heading to New York, where he tried but failed to find success as a dancer.

In 1964, while homeless, Mr. Ashford went to White Rock Baptist Church in Harlem, where he met Ms. Simpson, a 17-year-old recent high school graduate who was studying music. They began writing songs together, selling the first bunch for $64. In 1966, after Ray Charles sang “Let’s Go Get Stoned,” a song Ashford & Simpson wrote with Joey Armstead, the duo signed on with Motown as staff writers and producers.

They wrote for virtually every major act on the label, including Gladys Knight and the Pips (“Didn’t You Know You’d Have to Cry Sometime”) and Smokey Robinson and the Miracles (“Who’s Gonna Take the Blame”).

While writing for Motown, Ashford & Simpson nursed a desire to perform, which Berry Gordy Jr., the founder and patriarch of the label, discouraged. They left the label in 1973 and married in 1974.

Ashford & Simpson’s initial collaborations sold poorly, but by the late ‘70s, songs like “Don’t Cost You Nothing,” “It Seems to Hang On” and “Found a Cure” became hits on the R&B charts. Their biggest hit as a solo act was “Solid,” which reached No. 12 on the pop chart and No. 1 on the R&B chart in 1984.

They also continued to write hits for other people. “I’m Every Woman“ was a hit for Chaka Khan in 1978, and later for Whitney Houston on the soundtrack to the 1992 film “The Bodyguard.” In 1996, they opened the Sugar Bar on West 72nd Street in Manhattan, where they often presided over open mic nights. Recently, they received a songwriting credit on Amy Winehouse’s song “Tears Dry on Their Own,” which contains a sample from “Ain’t No Mountain High Enough.”

Besides his wife, Mr. Ashford is survived by two daughters, Nicole and Asia; his brothers Paul, Albert and Frank; and his mother, Alice Ashford.

Ashford & Simpson toured throughout their career, their harmony and vocal interplay illustrating the passion of their lyrics and of their life together.

“When Ms. Simpson sits down at the piano and begins to sing in a bright pop-gospel voice, unchanged since the 1970s,” Stephen Holden of The New York Times wrote in a review in 2007, “she awakens the spirit and tosses it to Mr. Ashford, whose quirkier voice, with its airy falsetto, has gained in strength from the old days. Soon they are urging each other on. By the time their romantic relay winds to a close, both are sweating profusely, and the audience is delirious.”

'Elephant Boy', 10, fighting for his life after legs swelled up and he contracted flesh-eating infection