April 18, 2011, 10:00 pm
By RONALD S. CODDINGTON
On the afternoon of April 19, 1861, Nick Biddle was quietly helping his unit, the Washington Artillery from Pottsville, Pa., set up camp inside the north wing of the Capitol building. The day before, he was almost killed.
Biddle was a black servant to Capt. James Wren, who oversaw the company of about 100 men. On April 18 the Washington Artillery had been one of several Army outfits, totaling about 475 men, heading through Baltimore en route to Washington, D.C., in response to President Lincoln’s call for 75,000 troops to put down the Southern rebellion. 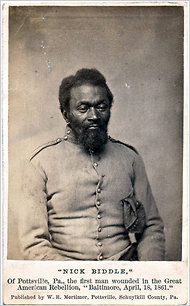 Thousands of pro-Confederate Baltimoreans turned out to meet them at the city’s northern train station. (Another group, 45 regular Army soldiers from the Fourth Artillery en route from St. Paul, Minn., to Fort McHenry, also disembarked.) The crowd expressed disappointment in the non-military look of some of the volunteers, who hailed from eastern Pennsylvania coal-mining country. They “were not more than half uniformed and armed, and presented some as hard-looking specimens of humanity as could be found anywhere,” reported the Baltimore Sun. Most of the men carried their own revolvers, while a few toted antiquated flintlocks. A select group carried state-issued modern muskets, but had no gunpowder for them.
Captain Wren, Biddle and the others were aware of Baltimore’s pro-secession sentiment and expected trouble. One volunteer reportedly asked Biddle if he was afraid to face rowdy “plug-uglies” and jokingly warned, “They may catch you and sell you down in Georgia.” Biddle replied in dead earnest that he was going to Washington trusting in the Lord, and that he wouldn’t be scared away by the devil himself — or a bunch of thugs.
The Pennsylvanians formed a line and prepared to march through Baltimore to another station, where they could catch a Washington-bound train. The regulars would lead the way. The line started and moved rapidly, shielded from the abusive mobs by policemen stretched 10 paces apart. A private recalled the “Roughs and toughs, ‘longshoremen, gamblers, floaters, idlers, red-hot secessionists, as well as men ordinarily sober and steady, crowded upon, pushed and hustled the little band and made every effort to break the thin line.”
The mob derided the volunteers and cheered for Jefferson Davis and the Confederacy. Some aimed their abuse at Biddle. Capt. Wren remembered, “The crowd raised the cry, ‘Nigger in uniform!’ and poor old Nick had to take it.”
Around the halfway point of the journey, the regular troops split off and marched to Fort McHenry, leaving the Pennsylvanians alone. “At this juncture the mob were excited to a perfect frenzy, breaking the line of the police and pushing through the files of men, in an attempt to break the column,” wrote one historian. The boldest in the crowd spit, kicked, punched and grabbed at the coattails of the volunteers.
As the Pennsylvanians neared the station, rioters chucked cobblestones and jagged pieces of broken brick. The bombardment intensified as the volunteers arrived at the station and began to board the cars. Suddenly a chunk of brick struck Biddle in the head and left a deep, profusely bleeding cut. He managed to get on the train as the mob climbed on top of the cars and jumped up and down on the roofs. Biddle found a comfortable spot, wrapped his head in a handkerchief, and then pulled his fatigue cap close over the wound.
When the Pennsylvanians finally arrived in Washington that evening, they received a very different reception, as enthusiastic crowds welcomed them as saviors. They occupied temporary barracks in the north wing of the Capitol. One officer remembered that, when Biddle entered the rotunda of the building, “He looked up and around as if he felt that he had reached a place of safety, and then took his cap and the bloody handkerchief from his head and carried them in his hand. The blood dropped as he passed through the rotunda on the stone pavement.” 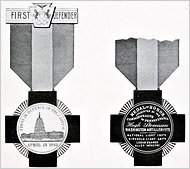 From Heber S. Thompson’s The First Defenders, scanned by openlibrary.orgFront and back of a commemorative medal approved by an act of the Pennsylvania legislature in 1891 and issued to surviving members of the First Defenders.

A grateful President Lincoln later greeted the Pennsylvanians. He reportedly shook hands with Biddle and encouraged him to seek medical attention. But Biddle refused. He preferred to remain with the company. At the time some considered Biddle’s blood the first shed in hostility during the Civil War.
The House of Representatives later passed a resolution thanking the Pennsylvanians for their role in defense of the capital. The volunteers came to be known as the “First Defenders” in honor of their early response to Lincoln’s call to arms.
The Washington Artillery remained in the capital area until their 90-day enlistment expired, and then returned to Pottsville; Biddle led the company as it marched through town. (Many in the unit re-enlisted and formed Company B of the 48th Pennsylvania Infantry, a regiment remembered for its role in digging and detonating the mine along the frontlines of Petersburg, Va., that prompted the July 1864 Battle of the Crater.)
But Biddle remained in Pottsville for the rest of the war, becoming something of a local celebrity. He soon sat for his carte de visite, a popular photographic format from France that became all the rage in America coincident with the rise of hostilities. “Nick himself sold thousands of these photographs,” remembered one veteran, who added, “to this day a photographic album is not considered complete in Pottsville without the picture of the man whose blood was first spilled in the beginning of the war.”
Biddle died destitute in 1876. His First Defender comrades paid his final expenses and attended his funeral en masse along with a large crowd that gathered at his home. Biddle’s body lay in an open casket in the front yard. “A pretty floral cross rested upon the old man’s breast. Except that the marks of death were visible in the attenuated look, there was but little change in the face,” noted a local newspaper. Also visible was a deep scar left by the Baltimore mob. According to a biographer, Biddle had considered it “his military badge and brand of patriotism.”