by KAREN GRIGSBY BATES
June 03, 2013 3:36 AM
The Saturday morning fog was burning off above the part of Santa Monica’s beach known as the Inkwell. It’s the stretch of sand to which black Southern Californians were relegated by de facto segregation until the 1960s.
Men, women and children walked across the sand in wet suits, carrying surfboards. They’re part of the Black Surfers Collective, which aims to get more people of color involved in surfing.
They had gathered to honor pioneer Nick Gabaldon, a legendary surfer who is remembered as the area’s first documented board man of African-American and Mexican heritage. 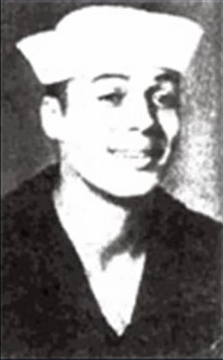 Nick Gabaldon
After graduating from Santa Monica High
he served in the US Navy for 18 months from 1945 until 1946.
After a jazzy rendition of the national anthem, libations were poured onto the flower-strewn sand for the ancestors, the sea and especially Gabaldon. He’s honored as a master waterman and barrier breaker.
After the prayer, priestess Nana Jumfee said she knows a lot of people would be surprised to see this crowd of black and brown surfers, but the tradition isn’t new in other countries.
“When you say ‘surfing,’ people do not think of black people. But I have images of little black boys in Ghana with some driftwood, standing up, you know, before there was television,” she said.
Jeff Williams, one of the organizers of Nick Gabaldon Day, wants people to remember how physically heroic Gabaldon was.
“That was the story of a guy in the ’40s and ’50s who used to leave this historic beach of the Inkwell in Santa Monica, and paddle the 12 miles north up to Malibu to surf Surfrider Beach, which is a world-renowned surf break,” he said.
It was in Malibu that Gabaldon died after a surfing accident in 1951. But his legacy is still very much felt here. Delila Valleau, dripping wet after riding several waves, said children of color need to know surfing is open to them.
“That’s why this is so important, because I didn’t even know to ask,” she said.
Seeing people of color on boards might make others think to try it. Eleven-year-old Gregory Rachal surfs and wants to help other kids do it, too.
“If we have a chance to help them surf, I bet surfing will get bigger around the community,” he said.
Of course, access to the beach remains a barrier to many communities. Meredith McCarthy, the program director for event co-sponsor Heal the Bay, said she sees how serious the issue of access is when she visits inner-city schools. It’s a long bus ride from many neighborhoods, and even if you can drive, parking is expensive.
“When I say, ‘How many kids have been to the beach?’ and four or five of them raise their hands, I know that I have a lot of work to do,” she said.
Saturday, the work was getting visitors conversant with the language of surfing. While their boards were on the sand, they learned how to paddle out, crouch and stand.
After the lessons, it was time to hit the water. There was a lot of splashing and squealing — and not just among the juvenile surfers. Parents watched in delighted amazement as their children surfed in — a little wobbly — on the gentle waves.
The Black Surfers Collective’s Williams tried to explain what the newbies were feeling: “To be able to catch a wave and to completely live in that moment at that time of reality, there’s nothing like it.”
http://www.npr.org/blogs/codeswitch/2013/06/03/188154115/barrier-breaking-surfers-legacy-a-reminder-of-work-to-do

Man freed from jail after 40 yrs: convicted by all-white jury because he was black allegedly