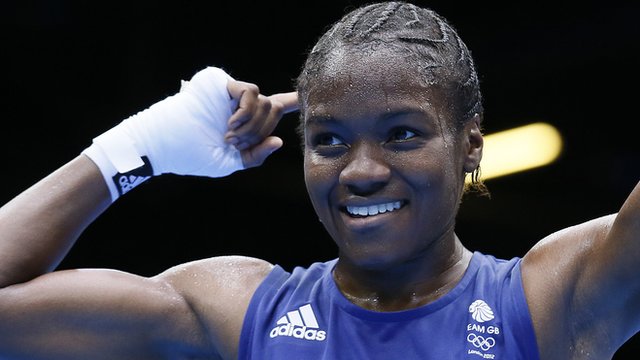 Adams, 29, was beaten by Cancan in the finals of the 2010 and 2012 World Championships but the result was never in doubt this time around.

Adams opened up a 4-2 lead after the first round with some incisive jabs and clubbing right hands, then knocked Cancan down in the second.

The Leeds boxer made Cancan look like a novice in the final two rounds as her opponent chased the fight, Adams ending up a 16-7 winner.

“It’s a dream come true,” she told BBC Sport afterwards. “I am so happy and overwhelmed with joy right now. I have wanted this all my life and I have done it. To be taking the gold medal back to Leeds will be special.”

In front of a vociferous crowd at ExCeL – the majority of the 10,000 crowd were there primarily to see Irish lightweight Katie Taylor – Adams looked composed from the start, landing with spearing jabs and a handful of clubbing rights as she opened up a two-point lead after the first.

She got the better of a fierce exchange at the start of second before a huge right hand had the 26-year-old Cancan reeling on the ropes.

Midway through the second, Adams sat Cancan on her backside with a thunderous left-right combination and the Englishwoman won the third round 5-1 to take a 14-5 lead into the final round.

With the fight and the gold medal all but in the bag, Adams coasted the fourth, the lop-sided scoreline accurately reflecting the action.

Adams, whose infectious smile is never far from her face, danced a jig and patted the badge on her vest after her arm was raised, although the extent of her historic achievement will probably only become apparent in the coming days.

Adams was one of three British female boxers to qualify for the Games – Natasha Jonas and Savannah Marshall lost their first bouts.

With four male British boxers fighting for a place in Friday’s finals, this is Britain’s most successful Olympics in the ring since Melbourne 1956.

Women’s boxing pioneer Barbara Buttrick, a professional world champion in the 1950s, was in the audience and said she was proud of the achievements of fellow Yorkshirewoman Adams.

“When I was around, I would never have dreamed women boxers would ever get into the Olympics,” said Buttrick.

“But now they’ve got that credibility and that will bring a lot more girls into it because they’ll feel more comfortable going into a gym.”