By ADAOBI TRICIA NWAUBANI
Published: February 9, 2013
ABUJA, Nigeria
IN America, all men are believed to be created equal and endowed by their creator with certain unalienable rights. But Nigerians are brought up to believe that our society consists of higher and lesser beings. Some are born to own and enjoy, while others are born to toil and endure.
The earliest indoctrination many of us have to this mind-set happens at home. Throughout my childhood, “househelps” — usually teenagers from poor families — came to live with my family, sometimes up to three or four of them at a time. In exchange for scrubbing, laundering, cooking, baby-sitting and everything else that brawn could accomplish, either they were sent to school, or their parents were sent regular cash.
My father detested it when our househelps sang. Each time a new one arrived, my siblings and I spent the first few evenings as emissaries from the living room, where our family watched TV after dinner, to the kitchen, where the househelps washed dishes or waited to be summoned.
“My daddy said I should tell you to stop singing.” 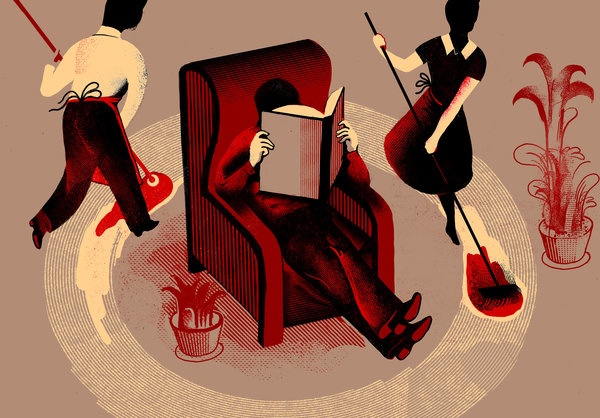 Immediately, they would shush. Often, they forgot and started again — if not that same evening, on a subsequent one. Finally, my father would lose his imperial cool, stomp over to the kitchen and stand by the door.
“Stop singing!” he would command.
That usually settled the matter.
I honestly cannot blame my father. Although they hailed from different villages across the land, their melodies were always the same: The most lugubrious tunes in the most piercing tones, which made you think of death.
Melancholic singing was not the only trait they had in common. They all gave off a feral scent, which never failed to tell the tale each time they abandoned the wooden stools set aside for them and relaxed on our sofas while we were out. They all displayed a bottomless hunger that could never be satisfied, no matter how much you heaped on their plates or what quantity of our leftovers they cleaned out.
And they all suffered from endless tribulations, in which they always wanted to get you involved. 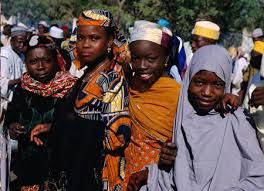 The roof of their family house got blown off by a rainstorm. Their mother just had her 11th baby and the doctor had seized mum and newborn, pending payment of the hospital bill. Their brother, an apprentice trader in Aba, was wrongfully accused of stealing from his boss and needed to be bailed out. A farmland tussle had left their father lying half-dead in hospital, riddled with machete wounds. Their mother’s auntie, a renowned witch, had cursed their sister so that she could no longer hear or speak. They were pregnant but the carpenter responsible was claiming he had never met them before … Always one calamity after the other.
Househelps were widely believed to be scoundrels and carriers of disease. The first thing to do when a new one arrived was drag him off to the laboratory for blood tests, the results of which would determine whether he should be allowed into your haven. The last thing to do when one was leaving was to search him for stolen items. In one memorable incident, the help in my friend’s house, knowing that her luggage would be searched, donned all the children’s underwear she had stolen. And she nearly got away with it. But just as she stepped out the door, my friend’s mother noticed that the girl’s hips had broadened beyond what food could afflict on the human anatomy in such little time, and insisted that she raise her skirt.
Every family we knew had similar stories about their domestic staff. With time, we children learned to think of them as figures depressed by the hand of nature below the level of the human species, as if they had been created only as a useful backdrop against which we were to shine. 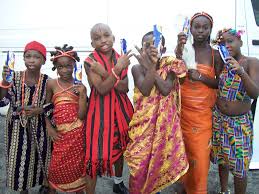 Not much has changed since I was a child. My friend’s daughter, who attends one of those schools where all the students are children of either well-off Nigerians or well-paid expatriates, recently captured this attitude while summarizing the plot of my novel to her mother. “Three people died,” the 11-year-old said, “but one of them was a poor man.”
It reminded me of the conversation in Mark Twain’s “Adventures of Huckleberry Finn,” when Huck tries to explain a delay in a journey:
“It warn’t the grounding — that didn’t keep us back but a little. We blowed out a cylinder-head.”
“Good gracious! anybody hurt?”
“No’m. Killed a nigger.”
“Well, it’s lucky; because sometimes people do get hurt.”

BIGOTS and racists exist in America, without a doubt, but America today is a more civilized place than Nigeria. Not because of its infrastructure or schools or welfare system. But because the principle of equality was laid out way back in its Declaration of Independence. The Nigerian Constitution states, in Section 17(2)(a), that “every citizen shall have equality of rights, obligations and opportunities before the law.” However, this provision is in a portion of the document that contains “objectives” of the Nigerian state. It is not enforceable; it certainly isn’t reality.

The average Nigerian’s best hope for dignified treatment is to acquire the right props. Flashy cars. Praise singers. Elite group membership. British or American accent. Armed escort. These ensure that you will get efficient service at banks and hospitals. If the props prove insufficient, a properly bellowed “Do you know who I am?” could very well do the trick.

This somebody-nobody mind-set is at the root of corruption and underdevelopment: ingenuity that could be invested in moving society forward is instead expended on individuals’ rising just one rung higher, and immediately claiming their license to disparage and abuse those below. Even when one househelp is made supervisor over the rest, he ends up being more callous than the owners of the house.

Some years ago, I made a decision to start treating domestic workers as “somebodys.”  I said “please” and “thank you” and “if you don’t mind.” I smiled for no reason. But I was only confusing them; they knew how society worked. They knew that somebodys gave orders and kicked them around. Anyone who related to them as an equal was no longer deserving of respect. Thus, the vicious cycle of oppression goes on and on.

Nigeria is one of Africa’s largest economies; it produces around two million barrels of crude oil per day. And yet, in 2010, 61 percent of Nigerians were living in “absolute poverty” — able to afford only the bare essentials of shelter, food and clothing. In one state in northern Nigeria, where extremist groups like Boko Haram originate, poverty levels that year were as high as 86.4 percent.

Economic growth will continue to bypass the majority, the gap between rich and poor will continue to widen, so long as we see ourselves as divided between somebodys and nobodys. Only when that changes will the househelps sing more cheerful tunes.

Black teen says teacher told him to call him ‘master’