Every year tens of thousands of West Africans migrate to Europe in search of a better life. But for some of them that search will end in tragedy, as they fall victim to competing mafia gangs that prey on the hopes of the desperate. In southern Italy, it is Nigerian women who are among the most exploited, with many ending up trapped in the nightmare world of the sex trade.
In the first of two special reports, Juliana Ruhfus investigates the plight of African women caught up in a web of organised crime, prostitution and people trafficking. In the following account Chiara Caprio, an Italian journalist who was involved in the making of the film, describes what they found out in southern Italy.
The ghetto of Destra Volturno, an assembly of houses once used by Neapolitan tourists, is surrounded by flowers as it hosts the funeral of Mary Morad, a seven-year-old from Ghana. She was killed by a man with psychiatric problems. But in Castel Volturno, more than one-third of the 25,000 official citizens are African and, in particular, Ghanaian and Nigerian.

Al Jazeera came to investigate the phenomenon of Nigerian organised crime in this small town, quickly forgotten after serious riots in 2008, when hundreds of Africans took to the streets to protest against the massacre of six young Ghanaians committed by Giuseppe Setola, the army of the Casalesi clan.

Mary’s family is waiting for the coffin and tension grows as delays and friction increase. Bose Atta, Mary’s Nigerian mother, who was trafficked to Italy to be forced into prostitution, is nervous. She cries as her friends express anger against Mary’s father, a man from Ghana who is now married to another Nigerian woman.
Finally, the coffin arrives and a group of men start celebrating with a Muslim rite. An improvised march towards the cemetery starts under a warm sun overheating a tormented African community.
Stronger than ever
“The Domitiana crosses Castel Volturno for 28 kilometres,” says Stefano Ricciardiello, a detective at the local police station, a small and shabby office overwhelmed by new and old papers covering stories of murders, repatriations and organised crime. “The new African mafia’s activities have invaded the whole territory.”

He is showing us along the roads where, one after another, Nigerian women and young girls are waiting for clients.
According to the United Nations Interregional Crime and Justice Research Institute (UNICRI), Italy is now the main destination for more than 10,000 Nigerian prostitutes, trafficked from Benin City to European cities and criminal hubs, just like the Domitiana and its coast.
“Nigerian criminals are able to find agreements with all the mafias, from Colombians to Chinese. But it’s an easy game for them in Italy also for another reason: the high number of Italian clients who look for prostitutes night and day,” says Giovanni Conzo, a prosecutor at the anti-mafia section in Naples.
“This organisation is stronger than ever. We should stop them before they take full control of our region,” he adds. But Conzo’s words offer just a glimmer of hope.
Using voodoo to enslave
Isoke Aikpitanyi, a former victim of trafficking and now the main reference point for Nigerian women in Italy, knows how this business is managed in Caserta’s area. As she walks in Castel Volturno’s historic centre, she explains: “Today in Italy there are almost 10,000 madams, each one in control of an average of two or three girls.”
Madams are the key, she explains. They are the main actors in this exploitation. They force girls into prostitution and ask for money to repay the debt. They work with “brothers”, men who are in charge of physically trafficking the “babies”, as girls forced into prostitution are called.
But Nigerian human trafficking is often associated with drug smuggling and a distorted use of religious tradition.
The women and girls are often forced to undergo a Juju oath-swearing ritual that commits them to repaying the money they owe to their smugglers on pain of death or insanity.
“The Juju, the voodoo rite, it’s not a bad practice. It was used to bring justice, but they ruined everything,” says Isoke with anger. “They don’t care how they make their money as far as they make it. They use Juju to enslave.”
Even in this hell, there are people who try not to lose hope. Sister Antonia, a Nigerian nun of the Sacred Heart of Jesus order, manages a shelter, the Casa Santa Maria dell’Accoglienza, launched in 2000 in the Fernandes centre by the Capua-based Caritas. Here, more than 70 women have found a place to stay and 10 children have been born.
“We were called by the bishop of Capua, Mons. Bruno Schettino, to promote these girls’ integration. They are all former prostitutes. If they want to change their lives, they know they’ll always find a place here,” Sister Antonia says. 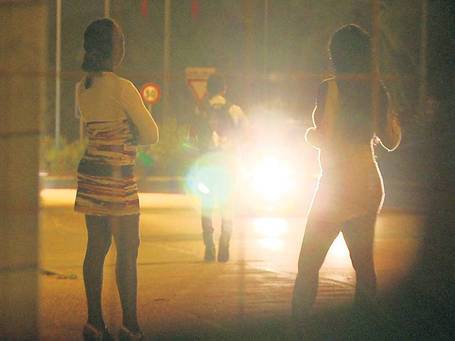 The women can stay for between six months and a year, a period when they dedicate their time to education and “to gain[ing] their dignity back,” explains Sister Antonia. The nuns give the girls the opportunity to write down their stories and explain what happened and who forced them into prostitution.
“We try to make them understand that Juju won’t have any effect on them,” she says.
But we met girls who still work on the streets and believe in the agreements they made. Some of them have to repay debts of up to $58,000 and are still terrified of the powerful consequences of Juju on their families and themselves.
In the second part of the special investigation, The Nigerian Connection II, Juliana Ruhfus follows the trail from Italy back to Benin City in Nigeria, from where women, desperately seeking an escape from grinding poverty, are trafficked to Europe.
To pay for their travel, many of them incur massive debts to organised crime gangs in the false belief that a lucrative regular job awaits them at the other end. Often they are forced to undergo a Juju oath-swearing ritual that commits them to repaying the money on pain of death or insanity.
When they arrive in Europe, they discover the only way they can do this is by agreeing to work in the sex trade. A Juju priest who is involved in the trade justifies the use of ritual practices on the grounds that he is offering a service to the community.
But as Juliana discovers, it is not just traditional African religions in West Africa that contribute to this trade on bonded labour. Evangelical Christian pastors have been involved too.
Reporter/ Producer: Juliana Ruhfus
Director: Orlando von Einsiedel
Associate Producer: Chiara Caprio
A Grain Media/ Pear Productions co-production

Video: Male student claims he was unfairly suspended for wearing a SKIRT to school, but not for wig or high heels

Mom 'kills newborn son after rolling onto him in drunken slumber'