Nigeria is running one of Africa’s biggest space programmes. The hope is the satellite-based project will help manage agricultural production, but not everyone is convinced of the benefits.

In 2003 Nigeria announced its space programme and within a few years it had launched its first satellite, which quickly lost power and disappeared from orbit.
Now Nigeria has three satellites in orbit including NigComSat-1R, built in China. It was launched in 2011 and has boosted internet and telecommunications services across the country.
Next, the Nigerians turned to Britain’s Surrey Satellite Technology, which has built two earth-observation satellites, including the top-of-the-range NigeriaSat-2, which at the time of its launch was producing the highest resolution images of any UK-built satellite. 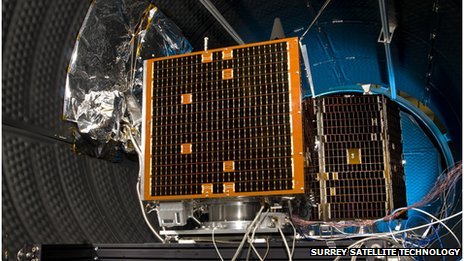 Satellites are being tested for Nigeria’s space programme

The other part of the project involved a trained team of 26 Nigerian engineers putting together the second satellite, NigeriaSat-X.
Both satellites are now providing data to help government agencies with planning.
For example, the satellites are tracking crops and weather around the country in an effort to protect long-term food supply.

Eventually we were able to catch up ”

There is also closer monitoring of the oil-rich Niger Delta, where there has been massive crude oil theft and environmental damage from oil spills.

This vantage point could also be useful in the Nigerian government’s fight against militants in the north.
“We’ve just collected images over Mali, which we’ve handed over to the armed forces because we believe they will be helpful to them in the peacekeeping mission over there,” says Seidu Mohammed, director-general of the National Space Research and Development Agency (NASRDA).
Data deluge
All the satellite data is collated and analysed at the NASRDA headquarters in Abuja. The modest buildings show that Nigeria’s space capabilities are still a long way away from those of some developed nations.
Elijah Oyedeji is part of the team that worked on NigeriaSatX and found the initial task of building a satellite programme from scratch quite daunting. “Eventually we were able to catch up,” he says.
He is now based in the control room and hoping to inspire a new generation of Nigerian scientists.
But not all Nigerians are convinced by these space ambitions. “These projects are always impressive to the ear,” says Akintunde Badiru, a Lagos-based banker, “that’s why they are commissioned in the first place.”
“Let’s see whether they are still functioning after four or five years, then we will see if this is worth it,” he says.
Although satellite capability should help with effective disaster management, the government was widely criticised last year for its slow response to nationwide floods.

So while up-to-date information might be readily available, some say it is no use if the relevant agencies do not have the capacity to deal with it.

But satellite imaging has already shown tangible benefits in some parts of the country.
In the capital, Lagos, and its surrounding area, satellite images are being used for urban planning and tax collection. The plan is to use this to help manage the rapidly growing population of Africa’s second largest city.
Nigeria is still plagued by problems of corruption and poor governance, which threaten the success of the programme, and many believe government money would be better spent on bread-and-butter issues such as health and education. The next few years will show to what extent Nigeria’s satellites can help with the country’s development.

Tim Scott becomes 1st Black U.S.Senator from the south since the 1800’s, and only current black U.S. Senator