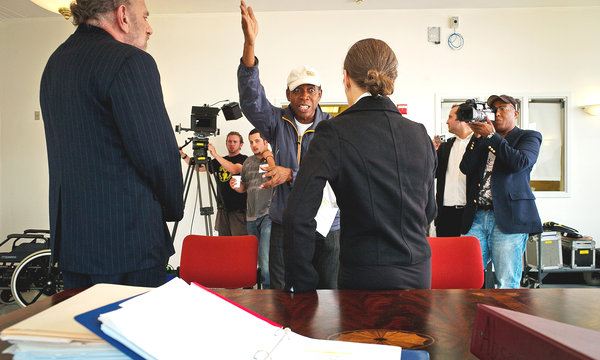 Tony Abulu, center; with Bern Cohen, left; and Andre Leigh during the filming of “Doctor Bello.”

ON the surface the production that commandeered a few dormant rooms at the Coler-Goldwater Specialty Hospital on Roosevelt Island this year resembled many other low-budget film projects in New York City. Crew members were each handling multiple jobs. Those from out of town were spending their short nights on friends’ couches. The catering consisted of a box of Dunkin’ Donuts and a carton of coffee, both empty by late morning.

But despite the production’s humble appearance there was a lot riding on it. Its director and producer, Tony Abulu, and his financial backers say the film, “Doctor Bello,” has the potential to chart a new direction for the booming Nigerian film industry half a world away.

That industry, known as Nollywood, is perhaps the world’s third-largest filmmaking industry in revenues, producing more than 1,000 titles every year. But the industry is known for churning out slapdash films with feeble story lines, amateurish acting and sloppy production values. Nearly all go straight to video and are soon forgotten.

In an effort to improve the quality, the country’s president, Goodluck Jonathan, pledged in 2010 to create a $200 million loan fund to help finance film projects.

This past spring Mr. Abulu, a Nigerian who lives in Harlem, was chosen to receive the fund’s first loan, $250,000. His film’s premiere is scheduled for Thursday at the Kennedy Center in Washington. 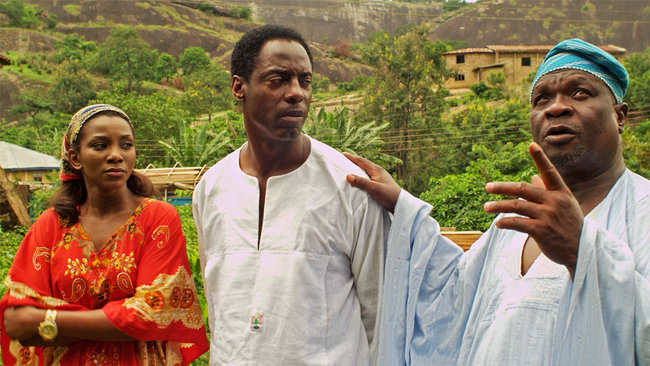 “The Nigerian government is saying, ‘Can somebody make a movie that will go to global mainstream theaters?’ ” Mr. Abulu said. “ ‘Can you make a film where someone in New York will go watch it and not walk out disgusted?’ ” He added, “They say I’m the one who can do it.”

Set in Nigeria and New York City, the film is about an African-American cancer specialist in New York, Dr. Michael Durant, who tries to save a young patient by seeking the help of an uncertified Nigerian doctor — Dr. Bello — an immigrant living in Brooklyn. Under the cover of night Bello slips the patient a secret African potion, helping him recover. But Durant’s solution is discovered, and he is suspended by his hospital while Bello is imprisoned for medical malpractice.

Soon, however, Bello himself falls critically ill, and it falls to Durant to save him by locating the secret elixir, which is found only in the “Garden of Life” on a mountain range in Nigeria.

Hoping to steer his film away from the straight-to-oblivion route of most Nollywood films, Mr. Abulu has set his sights high by the industry’s standards.

He cast A-list Nollywood stars, including Genevieve Nnaji and Stephanie Okereke. And with an eye to attracting an international mainstream audience, he brought in several Hollywood actors, including Isaiah Washington, best known for “Grey’s Anatomy”; Vivica A. Fox (“Kill Bill” and “Independence Day,” among many others); and Jimmy Jean-Louis (the NBC series “Heroes”).

During a break in filming in Brooklyn last spring Mr. Washington, who plays Durant (opposite Ms. Fox as his wife and Mr. Jean-Louis in the title role), said he signed on in part because he was drawn to the opportunity to “cross-pollinate” Hollywood and Nollywood. He also hoped his involvement might, in a way, help Nigeria, he said.

Mr. Abulu planned an ambitious filming schedule that straddled Nigeria and the United States, and he hired Americans for key creative positions, including his director of photography, Scott St. John.

“This isn’t a Nollywood film where they edit it in two weeks, and it looks like it was cut by a 7-year-old,” Mr. St. John said.

While the budget was $1 million “on paper,” Mr. Abulu said, actual expenditures will likely top out around $500,000 — minuscule by Hollywood standards but enormous for Nollywood. He was able to cut costs, in part, by persuading many of the cast members, including the stars, to defer at least some of their payment on the promise of a share of profits, he said. The staff of his media company, Black Ivory Communications, agreed to forgo payment altogether for a percentage of profits.

Mr. Abulu even took out a loan using his mother’s house as collateral. “And my mother’s 80,” he said. “I’m telling you, this is not a joke.”

In an interview the day after he wrapped principal photography in New York in May he revealed that he had exhausted his cash reserves. “It’s all gone, not a dime left,” he said. “I’ve got to go raise some more money.”

Within days he was in Nigeria trying to attract more sponsorship from corporations there. “It’s one thing to get the film in the can,” he said by telephone. “It’s another thing to do postproduction.” He also needed money for marketing and was hustling to find a distributor for Europe and the United States. Since then he has taken several more trips to Nigeria, including this month, to try to raise financial support for the film.

His soaring ambitions are part of what helped to persuade the Nigerian government to back him with the inaugural loan from the new entertainment fund.

Hope Yongo, an executive at the government-owned Nigerian Export-Import Bank, which is managing the fund, said the bank was impressed by Mr. Abulu’s conviction that his film would find an audience not only in Nigeria but also abroad.

“That gives us comfort that he will repay the loan,” Mr. Yongo said by telephone from Lagos. “His plan was very good.”

Mr. Abulu was born and raised in Nigeria, Africa’s most populous nation, and immigrated to the United States in the early 1980s. In New York he worked as a cultural impresario, organizing African music and dance performances and tours, then he ran a business magazine focusing on Africa.

In 1997 he released his first feature film, “Back to Africa,” which he made for about $100,000 and peddled door to door around the country, he said, selling it directly to video stores that specialized in African films. Two other films followed: “American Dream” in 2007 and “Crazy Like a Fox” in 2008.

Mr. Abulu, who has also collaborated with the American authorities in cracking down on the illegal trade in African films, is the most prominent member of a small, low-profile group of African filmmakers in New York City.

“What Tony is doing now is definitely like a new level of budget,” said Oliver Mbamara, a Nigerian-American filmmaker who is also a New York State administrative judge in Brooklyn. “We never get that kind of money for movies.”

Though Mr. Abulu sought to elevate “Doctor Bello” above other Nollywood fare, he still shot on a blindingly fast schedule, typical of Nigerian productions. He started filming in late April in Lagos. Within two weeks the production had shifted back to New York City, and principle photography was finished by mid-May.

The production moved quickly, wrapping scenes in no more than a few takes. It changed locations every day, sometimes several times a day, from a borrowed suite in the Ritz-Carlton on Central Park South to the Coler-Goldwater Hospital to Wall Street to the Bedford-Stuyvesant neighborhood in Brooklyn.

One afternoon it filmed at Buka, a Nigerian restaurant on Fulton Street in Clinton Hill, Brooklyn. But Mr. Abulu could not afford the cost of renting out the whole place, so he shot around paying customers, weathering the usual cacophony of a restaurant in full swing.

Some customers were asked to stop talking during takes. “Oh my God,” mumbled one diner to her companions as they picked gingerly at food, trying not to make noise with their forks. “The wrong day to come here.”

Mr. Abulu did not seem troubled by the imperfect conditions. He plowed through the shoot, remaining cool and issuing directions in a calm voice, and in short order he hustled his cast and crew to another location in Brooklyn. Filming would continue well into the night.

He said he was driven by the conviction that his project transcended moviemaking and had the potential to buoy his home country.