By Daniel Nasaw BBC News, Washington
14 June 2011 Last updated at 03:28
More than 60,000 Americans were sterilized, many against their will, as part of a eugenics movement that finished in 1979, aimed at keeping the poor and mentally ill from having children. Now, decades on, one state is considering compensation.
In 1968, Elaine Riddick was raped by a neighbor who threatened to kill her if she told what happened.
She was 13, the daughter of violent and abusive parents in the desperately poor country town of Winfall, in the US state of North Carolina.
While she was in hospital giving birth, the state violated her a second time, she says.
A social worker who had deemed her “feeble-minded” petitioned the state Eugenics Board to have her sterilized.
Officials coerced her illiterate grandmother into signing an “x” on an authorization form. After performing a Caesarean section, doctors sterilized her “just like cutting a hog”, she says.
“They killed my kids,” Ms Riddick says. “They killed mine before they got to me. They stopped it.”

Sterilisation in the UK and Europe

Nearly four decades after the last person was sterilised under North Carolina’s eugenics programme, a state task force is seeking the 2,900 victims of sterilisation officials estimate are still alive.

The group hopes to gather their stories and ultimately to recommend the state award them restitution. But with public coffers under severe pressure amid a flagging recovery, it is not clear the legislature will agree. 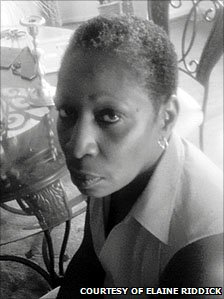 “I know I can’t make it right but at least I can address it,” said North Carolina state legislator Larry Womble. He hopes “to let the world know what a horrendous thing the government has perpetrated on these young boys and girls”.
America’s sterilization movement was part of a broad effort to cleanse the country’s population of characteristics and social groups deemed unwanted, an effort that included anti-race mixing and strict immigration quotas aimed at Eastern Europeans, Jews and Italians.
Beginning with Indiana in 1907, 32 states eventually passed laws allowing authorities to order the sterilisation of people deemed unfit to breed. The last programme ended in 1979.
The victims were criminals and juvenile delinquents, women deemed sexual deviants, homosexual men, poor people on welfare, people who were mentally ill or suffered from epilepsy. African Americans and Hispanic Americans were disproportionately targeted in some states.
‘Coerced’
“In general it was the dispossessed of society,” said Paul Lombardo, a historian and legal scholar at Georgia State University and editor of A Century of Eugenics in America.

The laws were plainly coercive, scholars say, though some incorporated a veneer of consent – illiterate farmhands given forms to sign, institutional inmates told they would not be released with their bodies intact, poor parents told they would be denied public assistance if they did not approve the removal of a wayward daughter’s fallopian tubes.
Motivating the laws, Prof Lombardo said, was indignation at the thought that people who had violated sexual mores would subsequently end up needing public assistance.
“We have in this country have always been extremely sensitive to notions of public stories of inappropriate sexuality,” he said.
“We exercise that most dramatically when it comes to times in which we think we’re spending individual tax money to support people who violate those social norms. It’s our puritanical background, running up against our sense of individualism.”
Supreme Court approval
The racial context was inescapable as well.
“The fewer black babies we have the better, that’s what some people said,” Prof Lombardo said. “‘They’re just going to end up on welfare.'” 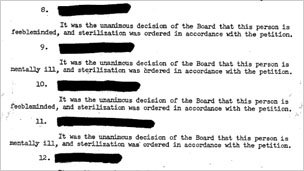 Also implicated in American sterilisation laws was the classical eugenic notion that as with horses, authorities could use genetic principles to improve society through selective breeding.
In a 1927 US Supreme Court decision that upheld the laws, storied jurist Oliver Wendell Holmes wrote: “It is better for all the world if, instead of waiting to execute degenerate offspring for crime or to let them starve for their imbecility, society can prevent those who are manifestly unfit from continuing their kind.”
All told, scholars estimate more than 60,000 Americans were sterilised under eugenics laws in the 20th Century.
North Carolina’s law stood out for the wide net it cast.
Telling their stories
Most states would only order sterilization of institutional inmates or patients, North Carolina’s allowed for people within the community – typically social workers to petition the state to have someone sterilized. 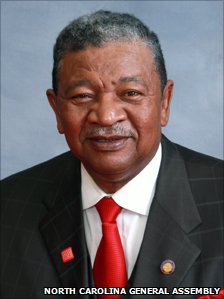 Of the 1,110 men and 6,418 women sterilised in North Carolina between 1929 and 1974, state health officials estimate about 2,900 could still be alive.
In recent years several states have re-examined their forgotten legacies – prodded in some cases by newspaper investigations – and extended official apologies.
North Carolina did so in 2003, but Mr Womble has continued to push for monetary compensation to the victims.
This month, a state task force created by his legislation will hold a public session at which surviving victims are expected to tell their stories.
The group will eventually make a recommendation for compensation to the governor – $20,000 per person has been suggested.
But the state is facing a $2.5bn (£1.5bn) budget shortfall. The conservative Republicans in control of the state legislature are already poised to slash transport, healthcare and education funds, so it seems unlikely lawmakers will authorise as much as $58m in reparations. 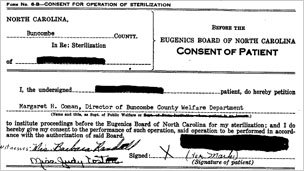 “My hope is that the state will recognise that there’s never going to be a good time for compensation,” says Charmaine Cooper, executive director of the Justice for Sterilization Victims Task Force, the state body.
Among those expected to testify is Ms Riddick, who now lives in Atlanta. She describes the prospect of a $20,000 payment as an insult.
“I am very angry,” she says. “God said be fruitful and multiply. They did not only sin against me, they sinned against God.”