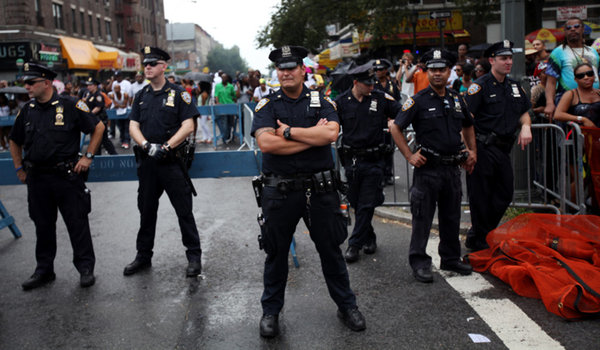 The West Indian American Day Parade is held annually over the Labor Day weekend as a celebration of Caribbean culture.

They called people “animals” and “savages.” One comment said, “Drop a bomb and wipe them all out.”

Hearing New York police officers speak publicly but candidly about one another and the people they police is rare indeed, especially with their names attached. But for a few days in September, a raw and rude conversation among officers was on Facebook for the world to see — until it vanished for unknown reasons.

It offered a fly-on-the-wall view of officers displaying roiling emotions often hidden from the public, a copy of the posting obtained by The New York Times shows. Some of the remarks appeared to have broken Police Department rules barring officers from “discourteous or disrespectful remarks” about race or ethnicity.

The subject was officers’ loathing of being assigned to the West Indian American Day Parade in Brooklyn, an annual multiday event that unfolds over the Labor Day weekend and that has been marred by episodes of violence, including deaths of paradegoers. Those who posted comments appeared to follow Facebook’s policy requiring the use of real names, and some identified themselves as officers.

Paul J. Browne, the Police Department’s deputy commissioner for public information, said he learned of the Facebook group from a reporter and would refer the issue to the department’s Internal Affairs Bureau.

The comments in the online group, which grew over a few days to some 1,200 members, were at times so offensive in referring to West Indian and African-American neighborhoods that some participants warned others to beware how their words might be taken in a public setting open to Internal Affairs “rats.”

“Filth,” wrote a commenter who identified himself as Nick Virgilio, another participant whose name matched that of a police officer. “It’s not racist if it’s true,” yet another wrote.

The officers were at times spurred on by civilian supporters and other city workers, including members of the Fire Department, an analysis indicated.

It is impossible to say with certainty whether those quoted are the people they claim to be. But a comparison by The Times of the names of some of the more than 150 people who posted comments on the page with city employee listings showed that more than 60 percent matched the names of police officers, and Mr. Browne did not deny that they were officers. Of course, some people do circumvent Facebook’s rule on identification.

It was impossible to determine the racial breakdown of the officers who were posting comments, but at least one of the participants said that most of them seemed not to be minorities.

Efforts were made to contact some of those who participated through the Police Department, through the prosecutor in a court case that revealed the existence of the group, through Facebook messages and through other methods. One, Nick Virgilio, said he was a member of the department but responded, “I don’t wish to comment.”

The comments in the group included anger at police and city officials and expressions of anxiety about policing what has often been a dangerous event. “Why is everyone calling this a parade,” one said. “It’s a scheduled riot.” Another said: “We were widely outnumbered. It was an eerie feeling knowing we could be overrun at any moment.”

“Welcome to the Liberal NYC Gale,” said another, “where if the cops sneeze too loud they get investigated for excessive force but the ‘civilians’ can run around like savages and there are no repercussions.”

“They can keep the forced overtime,” said one writer, adding that the safety of officers comes “before the animals.”

Wrote another: “Bloodbath!!! The worst detail to work.”

“I say have the parade one more year,” wrote a commenter who identified himself as Dan Rodney, “and when they all gather drop a bomb and wipe them all out.” Reached on Monday, Mr. Rodney confirmed that he was a police officer and that he had used Facebook, though rarely, but denied making the comment. “That wasn’t me,” he said before suggesting that someone else might have been responsible. “I leave my phone around sometimes. Other than that I have no comment.”

The page — though visible to any Facebook user before it vanished into the digital ether — appears to have drawn no public notice until an obscure criminal case in State Supreme Court in Brooklyn last month, the gun possession trial of an out-of-work Brooklyn food-service worker named Tyrone Johnson. His defense lawyers put many of the controversial remarks before the jury. But when that too seemed to draw little notice outside the courthouse, the lawyers, Benjamin Moore and Paul Lieberman of Brooklyn Defender Services, provided a digital copy of the Facebook conversation to The Times, saying it raised broad questions about police attitudes.

While preparing for the trial, Mr. Moore checked to see if the officer who had arrested his client, Sgt. Dustin Edwards, was on Facebook. He was. Mr. Moore noticed that Sergeant Edwards’s profile showed he belonged to a Facebook group formed, it said, for “N.Y.P.D. officers who are threatened by superiors and forced to be victims themselves by the violence of the West Indian Day massacre.”

The group’s title, “No More West Indian Day Detail,” attracted Mr. Moore’s attention because Sergeant Edwards had arrested Mr. Johnson in the predawn hours of the celebrations before the parade in 2010.

Mr. Moore said that when he clicked on the link — the page was apparently public — and began reading a conversation that ran 70 printed pages, he was struck by what seemed to be its reckless explicitness. “I found it astounding,” he said. He made a digital copy. When he looked two days later, all trace of the group was gone.

Sergeant Edwards testified he had never posted a comment on the group that protested the West Indian Day detail. He said his involvement had amounted to nothing more than clicking on the name of the group that included “a lot of the people in another police group that I’m in.”

Still, through Mr. Moore’s questions, Justice Bruce M. Balter’s courtroom got an earful of what Mr. Moore described as the bias-riddled police commentary.

“I’m not aware of the post, no,” the sergeant testified. He agreed the comments were offensive.

A prosecutor, Lindsay Zuflacht, argued that with no posts from Sergeant Edwards, there was “nothing to indicate that he feels at all the same.” The sergeant did testify, however, that he agreed with the statement that police officers were forced each year to become victims of the violence of the West Indian Day parade.

On Monday, Jerry Schmetterer, a spokesman for the Brooklyn district attorney, said the office would investigate any matters stemming from the trial referred to it by the Police Department.

At the trial, the prosecutor read the jurors one of the cautionary postings that was on Facebook. “Please keep it focused,” the post said. “This is not a racist rant. This is about us, the cops.”

London police try to identify stowaway who fell from the sky