OAKLAND, Calif. — Over the next several months, this city just across the bay from San Francisco will be partitioned into five police districts from its current two. The smaller districts, according to a new plan, will each be led by a powerful captain who will be held accountable for crime reduction in regular meetings with the police chief.
But equally important will be the captain’s focus on community policing. In a smaller area, the theory goes, the captain will be able to reach out to more community leaders in a city with a long, troubled history between its police and residents, especially in black and Hispanic neighborhoods.
“The police cannot do it by themselves,” said Capt. Steven Tull, the commander of one of the first two districts scheduled to be created on March 16, speaking at a station in a high-crime area of East Oakland. “The community must really be engaged because sometimes the community might have solutions, they might have ideas and we need to respect that.”
Late last year, Oakland barely avoided becoming the first city in the nation to lose control of its police force to federal authorities. Understaffed and demoralized, the city’s police department is still struggling to quell a crime surge that has angered residents and community leaders and turned Oakland into the most violent city in California. 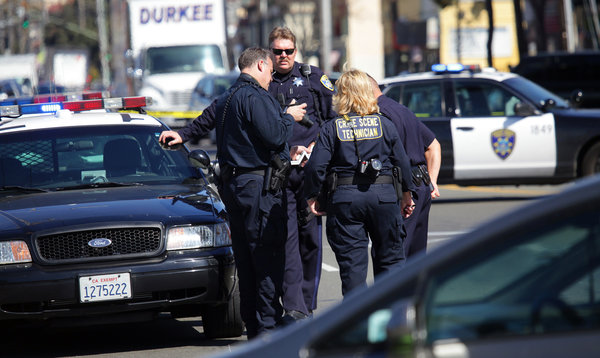 (Jim Wilson/The New York Times) Oakland police at the scene of a shootout in east Oakland last week. Several drivers trying to get out of the way of the shooting were involved in collisions.

But city leaders say that changes like the one Captain Tull is overseeing, as well as others ahead, might signal the start of a turnaround. A powerful independent director, who will have the authority to fire the department chief and make budget decisions, is expected to start overseeing the force this month. In addition, a leading authority on urban policing, William J. Bratton, toured Oakland last week as the department’s new consultant. Mr. Bratton served as New York City’s police commissioner in the mid-1990s and as the Los Angeles police chief in the 2000s.
The independent director and Mr. Bratton will face a department with deep-rooted problems. The force has dwindled to 611 officers from a peak of 837 in 2009 as a result of budget cutting caused by a housing crisis and other financial problems facing the city. Mayor Jean Quan pledged in her recent State of the City address to restore the force to its full strength by hiring 200 officers over the next five years, but acknowledged that would require “an absolutely amazing boom” in the city’s coffers.
The city has turned to outside help not only for the department’s reorganization but for more basic services, as well. California Highway Patrol officers were deployed late last year by Gov. Jerry Brown to help the beleaguered Oakland Police Department. The officers continue to make the rounds in this city’s most troubled neighborhoods and blocks. With little prospect of an immediate increase in its force, Oakland recently also secured help from Alameda, its county sheriff’s department, to patrol its streets.
“We’re so understaffed we’re just going from emergency to emergency,” said Sgt. Christopher Bolton, the chief of staff to Chief Howard Jordan of the Oakland Police Department. “Without the patrol by the C.H.P. and Alameda County, we wouldn’t have any presence in many areas.”
Both young and midcareer officers have been leaving for other police departments.
“Morale is at the lowest ebb it’s ever been,” said Sgt. Barry Donelan, the president of the Oakland police officers union.
Some homeowners have pooled resources to hire private security firms to patrol neighborhoods. In black and Hispanic neighborhoods, some church leaders, like Bishop Bob Jackson of the Acts Full Gospel Church, have called on the city to declare a state of emergency.
“The perpetrators are aware that the police department is understaffed and that they’re not really able to police and patrol the city,” said Mr. Jackson, who keeps a map of Oakland and the latest crime statistics in the office at his sprawling church. “So crime just escalates because you literally can get away with the crime of murder in the city of Oakland.”
In Oakland, a city of 396,000 residents, there were 126 murders in 2012, a 22 percent increase from the year before, according to the department. Rapes rose by 20 percent, robberies by 24 percent, and burglaries by 43 percent. Officers made 10 percent fewer arrests last year than in 2011, and 46 percent fewer compared to 2009, the year before the force began shrinking.
The department has also been struggling for years to carry out court-ordered reforms as part of the settlement of a decade-old civil rights lawsuit. In 2003, 119 residents successfully sued the city for $11 million, accusing four officers known as the Riders of brutalizing suspects and planting evidence. As part of his decision, Judge Thelton Henderson of United States District Court mandated that the department implement a series of changes within five years to prevent future misconduct.
An independent monitor who has been overseeing the changes on behalf of the judge said in a recent report that the department was slipping behind in two critical areas: supervisors’ assessment of the use of force by subordinates and officers’ cooperation in reporting misconduct by other officers.
Dissatisfied with the pace of progress, however, Judge Henderson threatened last year to put the department under federal receivership. The judge decided instead to create a position that he called independent compliance director, filled by a person who would exercise broad authority over the force until reforms were fully implemented. Last week, Judge Henderson designated as director Thomas Frazier, a police consultant who was Baltimore’s police chief and who wrote a critical report last year on the Oakland police’s handling of the 2011 Occupy protests.
“A compliance director is as close to a federal receivership as we could get,” said John Burris, a lawyer who was involved in the original lawsuit and who also pushed for a federal takeover last year. “What was important was that the compliance director would have the authority to hire and fire the chief, and move any of his command people if they weren’t working up to snuff.”
Robert Wasserman, a police consultant working with Mr. Bratton, said a priority for the department should be to improve relations with the community. In addition to creating districts headed by captains, he has proposed that community representatives become involved in training officers at the academy, as well as in the hiring process.
“You have to have a lot of interaction and dialogue, and these things have not happened in Oakland,” Mr. Wasserman said.
At his first news conference here last week, Mr. Bratton said he would immediately focus on improving the department’s crime data collection system. Declaring that “this is a very winnable situation here in Oakland,” he said he wanted crime reduction within three months, especially in homicides, robberies and burglaries.
Mayor Quan and Chief Jordan have said that the appointment of the independent director and the arrival of high-profile consultants were a step in the right direction. Others like Lynette McElhaney, a city councilwoman, were more skeptical, saying that the increasing layers of authority would sow confusion.
“Average citizens have been asking me,” she said, “ ‘How many chiefs does it take to arrest a thug?’ ”