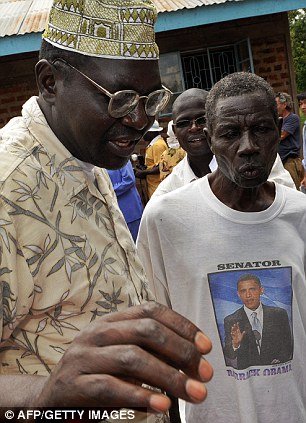 Inspired: Malik Obama, left, is attempting to become governor of Kenyan county Siaya, claiming he has been ‘inspired and challenged’ by his half-brother Barack

Barack Obama’s Kenyan half-brother has launched his own political career, claiming he has been ‘inspired and challenged’ by the US President.

Malik Obama, 54, who shares a father with his powerful brother, plans to run for governor of a Kenyan county.
The economist said that the achievements of his more famous brother, who became America’s first ever black president, had prompted him to try politics for himself.
He said: ‘When I look at the success that my brother has had in America, I feel I would have let down my people if I do not follow in his footsteps and end their suffering through dedicated, honest and focused leadership.’
Speaking from his ancestral home of Kogelo in western Kenya, he said that he was the best candidate to deal with the ‘endless cycle of poverty and unemployment that bedevils my people’.
Malik certainly has not been shy about advertising the advantage his surname brings him, believing that his Washington links will help him clinch the seat.
His main rival in the election is another well connected candidate, the younger brother of Kenyan Prime Minister Raila Odinga.
Mr Obama said: ‘I can confidently say that of all the people who are vying for the position, I am the best placed candidate… by virtue of my second name alone, I have the connections to bring development to Siaya.’ 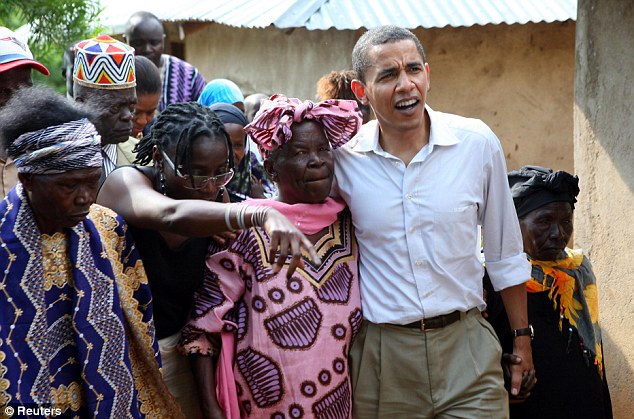 Home: US President Barack Obama holds his step-grandmother Sarah Hussein Onyango Obama as he returned to his ancestral Kenyan village Kogelo in 2006

The elections relate Siaya, Mr Obama’s home county, located some 100km from the lakeside city of Kisumu.
In a country polarised by dominant political parties such as the Orange Democratic party led by Odinga and The National Alliance party of presidential frontrunner Uhuru Kenyatta, Obama is running as an independent.

Malik and President Obama’s share the same father, Barack Obama Senior, who had six sons and a daughter.

Kenyans have claimed the US President as one of their own even though Barack did not know his father or relatives very well and was raised by his mother and grandmother in Hawaii.
Read more: http://www.dailymail.co.uk/news/article-2263857/Obamas-half-brother-Malik-running-seat-Kenyan-government.html#ixzz2IGetmPpv

Mother Forced To Sit In Class With 4th Grade Son