The New York City police detective who fired the first shots in the 50-bullet barrage that killed Sean Bellin 2006 has been fired, and three others involved in the shooting are being forced to resign, law enforcement officials said on Friday. 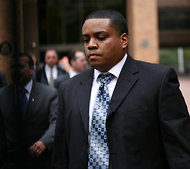 Detective Gescard Isnora, above, has been fired for his role in the 2006 shooting death of Sean Bell. 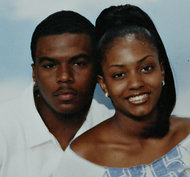 The decision came after a Police Department administrative trial in the fall found that the detective, Gescard F. Isnora, had acted improperly in the shooting that killed Mr. Bell on what was supposed to have been his wedding day and that he should be fired.

“There was nothing in the record to warrant overturning the decision of the department’s trial judge,” Deputy Commissioner Paul J. Browne said on Friday night.

Three other officers — Detectives Marc Cooper and Michael Oliver, who fired shots at Mr. Bell; and Lt. Gary Napoli, a supervisor who was at the scene but did not fire any shots — are being forced to resign.

Detectives Isnora, Cooper and Oliver were acquitted in a criminal trial in 2008 on charges of manslaughter, assault and reckless endangerment.

A fourth officer who fired his gun during the episode, Detective Paul Headley, has already left the department, and a fifth, Officer Michael Carey, was exonerated in the department’s administrative trial.

Detective Cooper and Lieutenant Napoli, who worked in the department for more than 20 years, will receive their pensions, a law enforcement official said. Detective Oliver, who has served for 18 years, may collect on a pension on the 20th anniversary of his start date, the official said.

The shooting of Mr. Bell, 23, who did not have a gun, occurred in the early morning on Nov. 25, 2006, as Mr. Bell and two friends were leaving a strip club in Jamaica, Queens, where they had been celebrating. The case drew widespread scrutiny of undercover police tactics.

Prosecutors questioned the judgment of the officers, with one arguing in the department’s trial that Detective Isnora overreacted, leading to “contagious firing” from those who followed his cue.

Detective Isnora testified that he thought Mr. Bell and a friend were about to take part in a drive-by shooting. He has said he believed, after overhearing a heated argument in front of the strip club, that the friend had a gun.

In July 2010, the city agreed to pay more than $7 million to settle a federal lawsuit filed by Mr. Bell’s family and two of his friends.

Sanford A. Rubenstein, a lawyer who has represented the Bell estate and the two men wounded along with Mr. Bell, said, regarding Detective Isnora, “The police commissioner followed the trial judge’s ruling, which was clearly appropriate based on the evidence.” Of the other disciplined officers, Mr. Rubenstein said, “I think the fact that they’re no longer on the police force is appropriate.”

Mr. Isnora’s lawyer, Philip E. Karasyk, said, “The commissioner’s decision to terminate Detective Isnora is extremely disheartening and callous and sends an uncaring message to the hard-working officers of the New York Police Department who put their lives on the line every day.”

He continued: “Stripping a police officer of his livelihood and his opportunity for retirement is a punishment reserved for a cop who has turned to a life of crime and disgraces the shield. It is not for someone who has acted within the law and was justified in a court of law and exonerated by the U.S. Department of Justice.”

Many detectives were bracing for the decision after Deputy Commissioner Martin G. Karopkin, acting as the trial judge, recommended the punishment in November.

One law enforcement official said that, as the reality of the decisions sink in, they could have a drastic impact on how detectives view their work, particularly in the department’s undercover programs.