An Ohio school board has unanimously voted to place armed custodians on their k-12 campus in an effort to better protect their students from a future mass shooting.

Following Wednesday’s believed unprecedented 5-0 vote in the state, four male janitors were the first to volunteer to arm themselves with their own handguns on the rural Montpelier campus, the Toledo Blade reports.

The vote will permit only non-teaching employees to carry the firearms on the campus, so long as they complete a weapons training course. 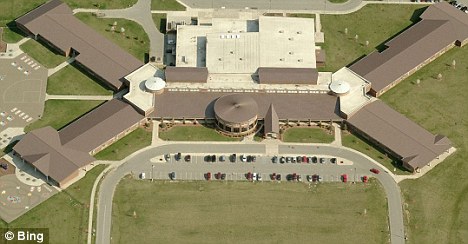 Packing: This K-12 school district in Montpelier, Ohio has unanimously voted to allow janitors and any other non-teaching employee to carry fire arms on campus

‘It’s kind of a sign of the times,’ Superintendent Jamies Grime said on Friday.

The move comes as districts and lawmakers across the nation weigh how to protect students following the December school massacre in Newtown, Connecticut.
The school board’s legal counsel accompanied the vote, Mr Grime told the Blade, who advised Ohio’s gun law which allows school boards to authorize employees to possess weapons on school grounds, should they pass the requirements of the concealed-carry law.
The school’s decision would not be the first, at least in the country, however.

A school district in Harrold, Texas has allowed its teachers and other employees to carry weapons on campus since 2007, reports the New York Daily News.
Following the December shooting in Newtown, school districts in Oklahoma, Missouri, Minnesota, South Dakota and Oregon are also considering similar gun safety amendments. 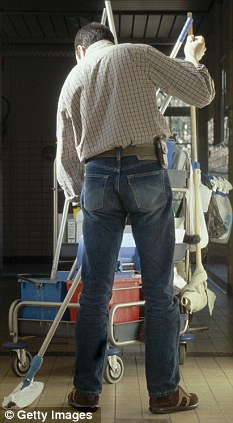 Side gig: The janitors were the first to volunteer, so long as they successfully complete a gun training program and bring their own weapons to the school (file photo)

On Thursday the Montpelier school district announced their decision on their school website and Facebook page, acknowledging parents having not been notified of their plan until now.
They explain: ‘the plan will not be enacted for many weeks, which allows for adequate time to notify parents of the plan.’

‘No one will be carrying a concealed firearm for at least one month. It will take time to properly train people and this must be completed before the plan will be enacted,’ they wrote.

On the school district’s Facebook page, more than a dozen reacted positively to the announcement.

‘While current laws do not permit firearms to be carried on school property, this course is designed to make you more comfortable with a firearm and provide a broader knowledge base on the issue,’ they wrote of their program said to be taught by professional law enforcement officers and licensed attorneys.

‘This may be one solution in the future to prevent the next tragedy. GunTeachers appreciates and recognizes your role in keeping students safe,’ they write of their program.
Read more: http://www.dailymail.co.uk/news/article-2261117/Montpelier-Ohio-school-board-unanimously-votes-place-armed-CUSTODIANS-K-12-campus.html#ixzz2HmznykZ8

An end to the flu? Oral spray 'kills 99.9% of infectious airborne germs'

Mary J Blige's charity accused of being a scam with 'no office, no phone number and missing donations'