By Vikram Doctor, ET Bureau | 7 Jun, 2013, 07.24AM IST
Charles De Gaulle is once said to have exclaimed, “How can you govern a country which has 246 varieties of cheese?” I once heard a Gujarati lady express an Indian equivalent of this: “Can you imagine a family where every man has his bhindi made differently?” she asked. Her husband, two sons, father-in-law and brother-in-law all loved bhindi, but only when made in different ways for each. One wanted short rounds, another medium cylinders, a third slanted slices, a fourth kept whole but slit and stuffed and I can’t remember the last.
That is testimony to how much Indians love okra or bhindi, and also to the number of ways we cook it. Whether cooked Sindhi-style in kadhi, on eggs in Parsi bheeda-pe-eeda, dryfried with potatoes, braised with tomatoes and onions, stuffed with aamchur, doused in a raita, cooked with mustard paste or tamarind, fried till crisp and so many other ways, bhindi is such a firm favourite here that it can be surprising to learn that it may not be Indian in its origin and that we probably aren’t the most okra-obsessed people in the world.
Like the black-eyed peas featured here last week, okra’s origin is probably Africa (though some bhindi lovers still argue for South Asia) and it seems to have spread in similar ways – to the Middle-East and the rest of Asia (Europe never took to it) by natural means and to the Americas with the slave trade.

Lady’s finger: How it grew into one of the world’s most versatile veggies
The story is that slaves concealed okra seeds in their ears but as American food writer Robb Walsh points out in his essay ‘Pods of the Gods’, try sticking okra seeds in your ears to see how likely that would be, especially when being led off to slavery: “How would I react? Seething with anger, weeping with sorrow and screaming in rebellion all came to mind. Sticking some okra seeds in my ear did not.”
Walsh cites research by geographer Dr. Robert Voeks for a more likely explanation. Okra, like black-eyed peas, was taken by the slaves’ masters, most likely the pragmatic Portuguese, to plant as an easy source of food for the slaves: “It made good business sense to keep slaves healthy. Okra is nutritious, it’s a West African staple and it grows like a weed.”
Okra is part of the hibiscus family, grows fast, is heat tolerant and produces plentifully and continuously. The pods are packed with protein, nutrients and also fiber and so it feels filling. Like another member of the hibiscus family, roselle (gongura or ambadi in India), its leaves can be eaten for further benefit.
The slave owners must have become curious about these green pods, so elegantly shaped they would be called ladies fingers. And when they tried it, they would have encountered the big quirk of okra – the abundant mucilage in the pods that causes slimy strands to form when cut. Many squeamish Westerners, used to the simplicities of a bread and meat diet, must have recoiled and okra has gained a reputation as a slightly repulsive vegetable. But others took to it with gusto, not exactly embracing the slime, but finding ways to stop it forming (frying, coating it with flour, making sure the pods stayed whole so the mucilage didn’t spill out, and so on).
Even more, with Americans in the South, sustained by slavery and its memories, the weirdness of okra became a badge of honour, yet another sign of how they were different from the narrow-minded North. Along with ingredients, like black eyed peas and collard greens, okra became a staple of Soul Food, and was celebrated in songs like Roy Blount Jr’s Ode to Okra: “It may be poor for eating chips with/ It may be hard to come to grips with/ But okra’s such a wholesome food/ It straightens out your attitude.” Blount argues that okra is not ‘slimy’, but ‘slick’, a word with very different connotations, and he ends his song: “You can have strip pokra/ Give me a nice girl and a dish of okra.” 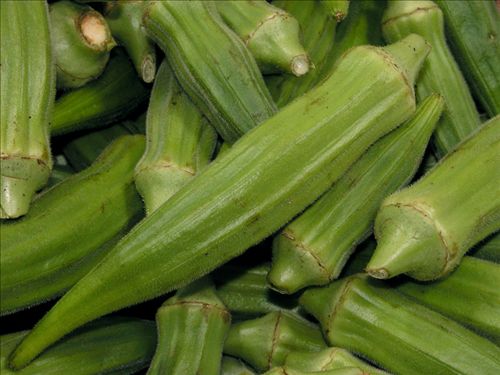 All of which will sound strange to Indians who see neither reason to worry about or celebrate okra’s sliminess/slickness. It is just a property of the vegetable, the mucilage being one way to store water, and we use it to happy effect since even when okra is deep-fried, its interior retains a tender succulence that contrasts nicely with the crisp exterior. Most Indian okra recipes involve frying it and I think we mainly eat it for textural pleasure since the strong seasonings we use with it overpowers its mild taste. And this is why, just occasionally, it can be interesting to try recipes that give more space to this taste.
Some Middle-Eastern recipes do this, cooking the pods whole with tomatoes, but few spices or, in one Armenian dish, cooking okra with apricots for an unexpected, but lovely pairing (there is a recipe in Arto der Haroutunian’s excellent book on Middle Eastern vegetable dishes). But it is the Japanese who have really taken to the taste and texture of okra with enthusiasm.
It helps that they like slimy foods, like natto, the truly unsettling looking soya beans that are fermented to leave long sticky strands. I have come across a recipe for natto and okra, which may be taking things a bit far, but for an easier dish, just boil whole okra pods briefly (they should not get soft) and then slice and dress them with soya sauce and mirin, the slightly sweet Japanese flavouring sauce. This is a delicate tasting and low-calorie salad that will not be to everyone’s taste but is definitely worth trying.
Perhaps the most unexpected okra dish I have found is actually Indian, from 135 years back. Colonel Kenney-Herbert in his Culinary Jottings for Madras (1878) is full of enthusiasm for bandecais, as he calls them. His recipes are quite Western, for example, stuffing them with anchovies, but perhaps the most surprising is his direction to eat not the pods, but just the seeds and pulp inside. I suspect he was using the large, white-green okra that is sometimes grown in the South, rather than the small dark-green pods we are more familiar with, but these can be used when they get large and woody.
The Colonel instructs you to boil okra till it’s soft and squeeze out the seeds – be warned, this means slime galore! But it’s sort of fun to do in a messy way and brings attention to the white, soft seeds that we don’t notice when we cook okra whole. If left to mature and dry, they can be used to press out okra-seed oil which is said to taste good (if any reader knows where to get this, I would love to know). Eaten young like this I think they are full of ‘umami’, that subtle savoury flavour, and the Colonel’s recipe accentuates this, sauteing seeds (and slime) briefly in butter, adding pepper and anchovy essence (I used Thai fish sauce) and a dollop of cream that melds with the mucilage to make it creamy.
This was meant to be served on toast, a kind of savoury appetiser that the Colonel was particularly fond of and I have to say that, if you can deal with the weirdness of cooking okra in a way that increases, not decreases the slime, you will get an unexpectedly delicate and delicious mouthful. I doubt this will ever become a popular dish, but okra lovers should try it as a way to experience a new side of this wonderful and weird vegetable.
http://economictimes.indiatimes.com/features/corporate-dossier/ladys-finger-how-it-grew-into-one-of-the-worlds-most-versatile-veggies/articleshow/20463186.cms