Sahelanthropus tchadensis is an extinct hominid species that is dated to about 7 million years ago. Whether it can be regarded as part of the Hominina tree is unclear; there are arguments both supporting and rejecting it. Another complication in its classification is that it is older than the human–chimpanzee divergence (estimated to 6.3 to 5.4 million years ago) seen in genetic data] and that there are few if any specimens other than the partial cranium known as Toumaï. 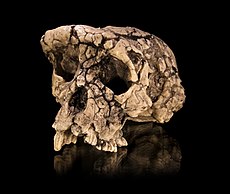 Existing fossils – a relatively small cranium nicknamed Toumaï (“hope of life” in the local Dazaga language of Chad in central Africa), five pieces of jaw and some teeth make up a head that has a mixture of derived and primitive features. The braincase, being only 320 cm³ to 380 cm³ in volume is similar to that of extant chimpanzees and is notably less than the approximate human volume of 1350 cm³. The teeth, brow ridges, and facial structure differ markedly from those found in Homo sapiens. Cranial features show a flatter face, u-shaped dental arcade, small canines, an anterior foramen magnum, and heavy brow ridges. No postcranial remains have been recovered. The fossil suffered a large amount of distortion during the time of fossilisation and discovery. 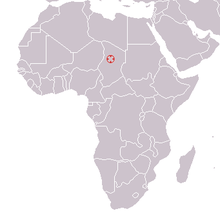 Since no postcranial remains (bones below the skull) have been discovered, it is as of yet unknown whether Sahelanthropus tchadensis was indeed bipedal or two-footed, although claims for an anteriorly placed foramen magnum suggests that this may have been the case, some paleontologists have disputed this interpretation of the basicranium. Its canine wear is similar to other Miocene apes. Moreover, according to recent information, the femur of a hominid may have been discovered alongside the cranium but never published.

The fossils were discovered in the Djurab desert of Chad by a team of four led by Michel Brunet; three Chadians, Adoum Mahamat, Djimdoumalbaye Ahounta and Gongdibé Fanoné, and Frenchman, Alain Beauvilain et al. All known material of Sahelanthropus were found between July 2001 to March 2002 at three sites (TM 247, TM 266 which yielded most of the material, and TM 292). The discoverers claimed that S. tchadensis is the oldest known human ancestor after the split of the human line from that of chimpanzees. The bones were found far from most previous hominin fossil finds, which are from Eastern and Southern Africa. However, an Australopithecus bahrelghazali mandible was found in Chad by Beauvilain A., Brunet M. and Moutaye A.H.E. as early as 1995. With the sexual dimorphism known to have existed in early hominids, the difference between Ardipithecus and Sahelanthropus may not be large enough to warrant a separate species for the latter.

Relationship to humans and chimpanzees

Sahelanthropus may represent a common ancestor of humans and chimpanzees; no consensus has been reached yet by the scientific community. The original placement of this species as a human ancestor but not a chimpanzee ancestor would complicate the picture of human phylogeny. In particular, if Toumaï is a direct human ancestor, then its facial features bring the status of Australopithecus into doubt because its thickened brow ridges were reported to be similar to those of some later fossil hominids (notably Homo erectus), whereas this morphology differs from that observed in all australopithecines, most fossil hominids and extant humans.

Another possibility is that Toumaï is related to both humans and chimpanzees, but is the ancestor of neither. Brigitte Senut and Martin Pickford, the discoverers of Orrorin tugenensis, suggested that the features of S. tchadensis are consistent with a female proto-gorilla. Even if this claim is upheld, then the find would lose none of its significance, for at present precious few chimpanzee or gorilla ancestors have been found anywhere in Africa. Thus if S. tchadensis is an ancestral relative of the chimpanzees (or gorillas) then it represents the first known member of their lineage. Furthermore, S. tchadensis does indicate that the last common ancestor of humans and chimpanzees is unlikely to resemble chimpanzees very much, as had been previously supposed by some paleontologists. Unfortunately, the exact age of the fossil is somewhat hard to determine. While molecular clocks are increasingly found to be far less reliable than initially believed, sediment isotope analysis which yielded an age of about 7 million years is generally considered quite reliable. In this case however, the fossils were found exposed in loose sand; co-discoverer Beauvilain cautions that such sediment can be easily moved by the wind, unlike packed earth. In fact, Toumaï was probably reburied in the recent past. Taphonomic analysis reveals the likelihood of one, perhaps two, burial(s) which seemingly occurred after the introduction of Islam in the region. Two other hominid fossils (a left femur and a mandible) were in the same “grave” along with various mammal remains. The sediment surrounding the fossils might thus not be the material the bones were originally deposited in, making it necessary to corroborate the fossil’s age by some other means. The fauna found at the site – namely the anthracotheriid Libycosaurus petrochii and the suid Nyanzachoerus syrticus – suggests an age of more than 6 million years, as these species were probably extinct already by that time.

UPDATE: 'I'm going to be late. I love you and I'll be back': The last words of Miami man who ate victim's face