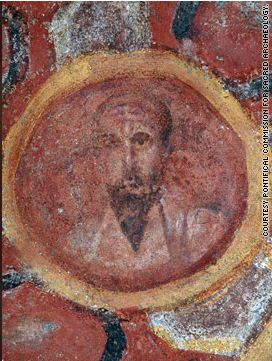 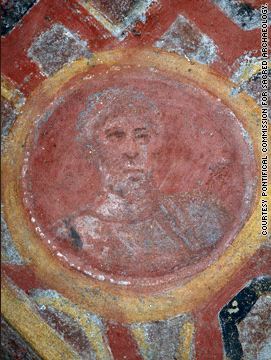 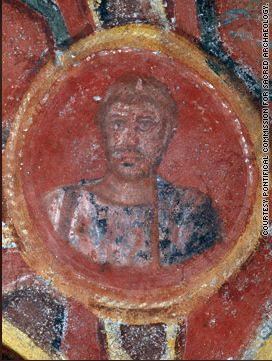 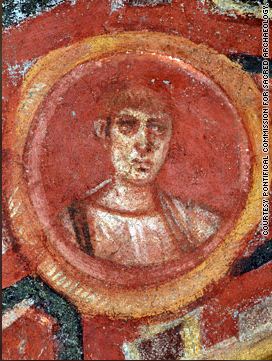 The oldest known icons of Jesus Christ’s apostles have been found in a catacomb near St. Paul’s Basilica in Rome, Vatican officials announced at a news conference on Tuesday.
Dating from the end of the 4th century, the full-face paintings depict three of Jesus’ original 12 apostles — St. Peter, St. Andrew and St. John — as well as St. Paul, who became an apostle after Christ’s death.
The Vatican already announced the discovery of St.Paul’s icon last June, to mark the end of the Pauline year. But the portrait was part of a larger fresco that also included the full-face depictions of the other three apostles.
Located on the ceiling of a noblewoman’s burial place in the catacombs of St. Tecla, the four circular portraits, about 50 centimeters (19.7 inches) in diameter, were buried in layers of white calcium carbonate caused by the extreme humidity and lack of air circulation.
“Using a new laser technology, we have been able to burn off some rather thick deposits of white calcium without damaging the extraordinary colors of the frescoes,” said Barbara Mazzei, director of the two year restoration project.
With the laser working as an “optical scalpel,” the images of the apostles came to light in full detail, showing that devotion to the apostles began in early Christianity, said Mazzei.
Indeed, St. Peter’s long, white beard, his squared face and the wrinkles on St. Paul’s forehead indicate that these frescoes may have set the standard for future representations of the apostles.
“These are the first images of the apostles,” said Fabrizio Bisconti, the superintendent of archaeology for the catacombs, which are maintained by the Vatican’s Pontifical Commission of Sacred Archaeology.
“The paintings of Andrew and John are undoubtedly the oldest ever. There are some older representations of St. Peter dating to the middle of the fourth century, but this is the first time that the apostle is not shown in a group but in an full face icon,” Bisconti told reporters.
Measuring about 2 meters by 2 meters (6.6 feet by 6.6 feet), the frescoes also depict the bejeweled noblewoman and her daughter.
“She could have been one of those aristocratic Roman women who had converted to Christianity at the end of the fourth century,” Bisconti said.

What Is the Koran?

Protestants are no longer the majority in U.S. due to rising number of Americans with 'no religion'