For decades, the seven reels from 1913 lay unexamined in the film archives of the Museum of Modern Art. Now, after years of research, a historic find has emerged: what MoMA curators say is the earliest surviving footage for a feature film with a black cast. It is a rare visual depiction of middle-class black characters from an era when lynchings and stereotyped black images were commonplace.

What’s more, the material features Bert Williams, the first black superstar on Broadway. Williams appears in blackface in the untitled silent film along with a roster of actors from the sparsely documented community of black performers in Harlem on the cusp of the Harlem Renaissance. Remarkably, the reels also capture behind-the-scenes interactions between these performers and the directors.
MoMA plans an exhibition around the work called “100 Years in Post-Production: Resurrecting a Lost Landmark of Black Film History,” which is to open on Oct. 24 and showcase excerpts and still frames. Sixty minutes of restored footage will be shown on Nov. 8 in the museum’s annual To Save and Project festival dedicated to film preservation.
“There are so many things about it that are amazing,” said Jacqueline Stewart, a film scholar at the University of Chicago. “It’s the first time I’ve seen footage from an unreleased film that really gives us insights into the production process.”

She added: “It’s an interracial production, but not in the way scholars have talked about early film history, in which black filmmakers had to rely on the expertise and money of white filmmakers. Here, we see a negotiation between performers and filmmakers.” Of the three directors of the film, one was black and two were white. 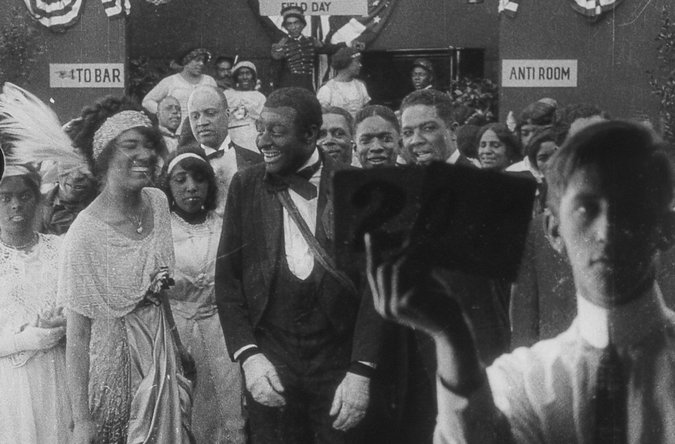 Footage from what may be the earliest surviving feature film with a black cast, made in 1913. Credit Bert Williams Lime Kiln Field Day Project, via Museum of Modern Art Art

The 35-millimeter footage was the raw material for a romantic comedy that would have run an estimated 35 to 40 minutes with titles. In it, Williams vies with two other suitors for an elegant lady, played by Odessa Warren Grey. Featuring domestic scenes, gatherings at a social club and a carefree day at a fair, the film has some racial stereotypes but also gives a glimpse of everyday activities. Here, the characters dress in high fashion for a ball and they take their children to the fair, where the grown-ups blithely ride the carousel. Williams and Grey have several tender exchanges.

The movie contains other gems. An elaborately staged ball scene in which the cast performs the Cakewalk is the longest early record of black vernacular dance on film, the curators said. Behind-the-scenes footage shows Williams’s ever-present blackface being applied. Even the kiss between Williams and Grey could mark a first example of such affection for black characters on film, said Ronald S. Magliozzi, the organizer of the exhibition and an associate curator in MoMA’s film department.

Mr. Magliozzi said the film was one of the first feature-length endeavors in an era dominated by shorts. Seventy percent of the feature-length films made in this country during the silent era of 1912-1929 have been lost, according to a Library of Congress survey.

“It’s absolutely fascinating and quite remarkable material,” said Paul Spehr, a historian of early cinema. “This gives us a richer idea of the kind of filmmaking going on.” 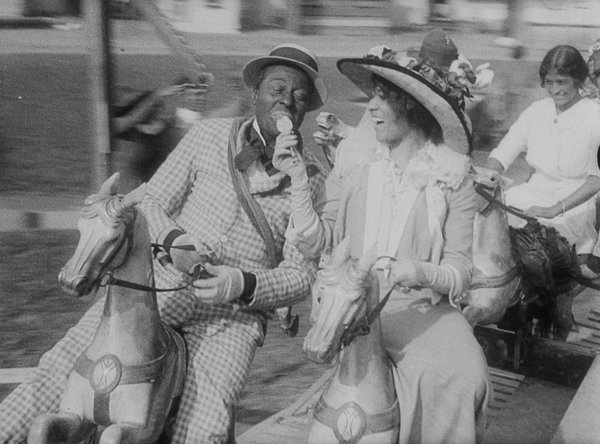 The reels were part of a collection of 900 unprinted negatives that came from the defunct Biograph company in New York. Iris Barry, MoMA’s founding film curator, acquired the cache, including the untitled Williams material, in 1939.
Its journey to the public began in 1976, when a curator copying the footage noted Bert Williams’s appearance. In 2004, Mr. Magliozzi’s curatorial team began restoring the film and researching its origins. The team showed the material to experts and combed through old trade papers like Moving Picture World and the Harlem newspaper The New York Age to identify the actors and directors. Comparisons were made between screen images and those on sheet music and old press photos. MoMA hired a lip reader to watch scenes for clues.

While it is not known why Biograph did not finish and release the film, Mr. Magliozzi theorized that a big factor was the hugely popular “Birth of a Nation,” made by D. W. Griffith after he left that studio. Set in the Reconstruction era, “Birth of a Nation” depicts heroic Ku Klux Klansmen and stereotyped black characters, played by white actors in blackface, like inept politicians and a would-be rapist. When “Birth” was released in 1915, it soured race relations, reducing the chances of the Williams film’s success, he suggested.

The presence of Williams, who wears a kinky wig and oversized shoes that give him a Charlie Chaplin-like shuffle, is perhaps the most striking aspect of the film. Williams appeared in only a few movies and was more famous as a comedian, mime, songwriter, stage actor and recording artist. His signature song, the sad sack “Nobody,” was a big hit.

“It is the most complete footage of one of the great American entertainers,” Margo Jefferson, a cultural critic who teaches at Columbia, said after seeing the MoMA film. “He’s only been shown in short clips before.”

Born in the Bahamas in the 1870s, Williams died in New York City in 1922, after a career that took him from the vaudeville circuit with his partner George Walker to a command performance at Buckingham Palace. Until now, only two of his fiction films had been known to survive. “Natural Born Gambler” and “Fish,” both shorts released in 1916. “Darktown Jubilee,” a Williams film about a shady preacher that by some accounts was released in 1914, has no known surviving copies, Mr. Magliozzi said.

Williams’s use of blackface, used by whites to mimic and mock black people, has been the subject of fascination to scholars and critics. African-American performers appeared to have donned blackface for different reasons: to mollify white audiences by obscuring their individuality, to continue the minstrel tradition, or even to heighten the absurdity of the convention.

So was Williams’s use of it pragmatic, ironic, subversive or just sad? W. C. Fields once commented that Williams was “the funniest man I ever saw and the saddest man I ever knew.”

Beyond Williams, once the MoMA film is shown in public more light may be shed on the other actors and the production, Mr. Magliozzi said. “They worked so hard,” he said, “and the film wasn’t even released. After 101 years, it’s about time.”

Was the wife of the former President of the Confederacy of mixed race?

Men of Words, Men of Deeds: Story of Eddie Robinson and Jake Gaither